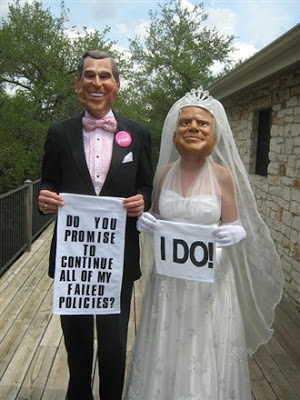 Newlyweds portrayed by Heidi and Jim Turpin of CodePink Austin. Photo courtesy of Heidi Turpin.
‘We were the only bride and groom there!’
By Susan Van Haitsma / The Rag Blog / September 2, 2008

I spoke by phone last evening with Austin CodePink member, Heidi Turpin, who is in the Twin Cities this week along with her husband, Jim to join in the demonstrations at the RNC.

Heidi and Jim were getting ready for a speaking event after the day’s big march and rally that drew thousands, the vast majority of whom marched peacefully as they had planned to do. Heidi said the march drew a lot of media, including a large contingent of foreign press.

CodePink activists had come from around the country to bring their trademark color, humor and street theatre to the RNC, including beautiful large puppets created especially for the events. Heidi and Jim as a McCain/Bush wedding couple were a popular draw for the cameras. “We were the only bride and groom there!,” Heidi said. Because she and Jim were wearing Bush and McCain masks (hard to talk when you are wearing a rubber mask!), they had prepared press cards to hand out, and she said they distributed about 80 of their cards to journalists who approached them.

Heidi reported seeing lots of riot police and police on bicycles, but she didn’t witness any arrests. Meanwhile, reports emerged that world-renowned journalist, Amy Goodman of Democracy Now! was arrested in the afternoon along with two producers from her show. Goodman, highly respected for her calm, straightforward style, was trying to find out from police the status of her staff, who had been arrested and roughed up for simply trying to document police and demonstrator activity. Suddenly, she was abruptly arrested herself. Goodman and her staff were later released, and a segment on today’s Democracy Now! program will be devoted to a report about their experiences.

Among the marchers were members of Veterans for Peace and Iraq Veterans Against the War, who had just held their national conventions in the Twin Cities ahead of the RNC. Here is a good interview with a few of the several hundred VFP members who traveled to Minnesota for the convention and RNC demonstrations. The interview was aired on Democracy Now! and was conducted by another renowned investigative journalist, Jeremy Scahill.