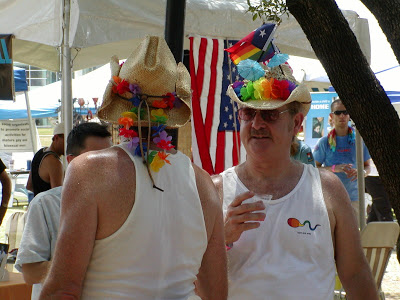 It was hot and sweaty but the Austin Pride 08 Festival at Auditorium Shores was a great success and seemed to come off without a hitch thanks to the Equality Texas organizers, lots of wonderful volunteers and Micah King, the main man.

Thousands of people from Austin, Texas and the world paid $15 at the gate to attend Austin’s Gay Pride festival. Approximately 130 vendors attended with variety ranging from BookWoman to Norml to Hawaiin Smoothies. Lots of good food, interesting music and a sense of family made everyone seem emotionally bouyant at this 7th annual Gay Pride Festival.

Quite a few non-profits had booths with lots of educational info and freebies. The music was as diverse as the gender preferences of the crowd in attendance. The Austin Pride Festival, as opposed to others including San Francisco’s, is a family event. All vendors and organizations involved agree to keeping all activity and demeanor family-friendly with no ludeness tolerated.

The people who wandered into my Peace Peddler booth were friendly, charming and quite conversant. An incredible parade followed the musical headliner’s performance which ended at 7pm. Mechell Ndegeocello, 7 time Grammy nominated bass player/vocalist brought down the house at the end of the day. If you didn’t attend you should plan to next year. Its a wonderful slice of Austin culture and being there renewed some of my faith that tolerance to diversity really can exist. 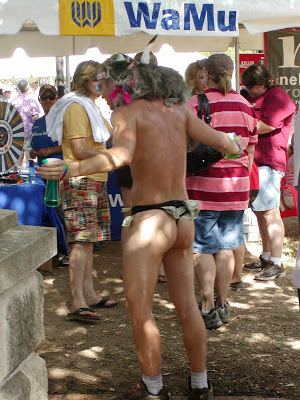 Whether on foot, bicycle, motorcycle or convertible, droves of people in colorful outfits marched from Auditorium Shores to Fourth Street, many playing dance music and tossing out candy to a crowd that stretched up the South First Street bridge and into downtown.

“We’re just letting people know we’re here, and this is who we are,” said Dale Atkinson, a marcher and volunteer with AIDS Services of Austin.

Dressed in cowboy boots and a dress partially made of Hershey bar wrappers, Heath Riddles rode in a pickup covered in blue plastic, streamers and purses.