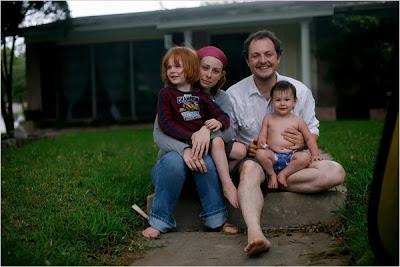 AUSTIN — Like many other young couples, Aimee and Jeff Harris spent the first years of their marriage eagerly accumulating stuff: cars, furniture, clothes, appliances and, after a son and a daughter came along, toys, toys, toys.

Jeff Harris and his son, Quinn, at home in Austin, Tex. Now they are trying to get rid of it all, down to their fancy wedding bands. Chasing a utopian vision of a self-sustaining life on the land as partisans of a movement some call voluntary simplicity, they are donating virtually all their possessions to charity and hitting the road at the end of May.

“It’s amazing the amount of things a family can acquire,” said Mrs. Harris, 28, attributing their good life to “the ridiculous amount of money” her husband earned as a computer network engineer in this early Wi-Fi mecca.

The Harrises now hope to end up as organic homesteaders in Vermont.

“We’re not attached to any outcome,” said Mrs. Harris, a would-be doctor before dropping out of college, who grew up poverty-stricken in a family that traces its lineage back through the Delanos and President Franklin D. Roosevelt to a Mayflower settler, Isaac Allerton.

Mr. Harris, 30, who dropped out of high school and “rode the Internet wave,” agreed, saying they were “letting the universe take us for a ride.”

They are not alone.

Matt and Sara Janssen, who traded down from their house in Iowa to a studio apartment in Montana and finally an R.V. powered by vegetable oil, now crisscross the country with their 4-year-old daughter, highway nomads living on $1,500 a month.

Not that simplicity need be that spartan. Cindy Wallach and her husband, Doug Vibbert, of Annapolis, Md., moved out of their apartment with an “everything must go” party and, along with their 3-year-old son, now sail and make their home on a 44-by-24-foot catamaran.

Though it may not be the stuff of the typical American dream, the voluntary simplicity movement, which traces its inception to 1980s Seattle, is drawing a great deal of renewed interest, some experts say.

“If you think about some of the shifts we’re having economically — shifts in oil and energy — it may be the right time,” said Mary E. Grigsby, associate professor of rural sociology at the University of Missouri and the author of “Buying Time and Getting By: The Voluntary Simplicity Movement.”

“The idea in the movement was ‘everything you own owns you,’ ” said Dr. Grigsby, who sees roots of the philosophy in the lives of the Puritans. “You have to care for it, store it. It becomes an appendage, I think. If it enhances your life and helps you do the things you want to do, great. If you are burdened by these things and they become the center of what you have to do to live, is that really positive?”

Juliet B. Schor, a sociology professor at Boston College and author of “The Overspent American,” said the modern “downshifters,” as she called them, owed debts to the hippies and the travel romance of Jack Kerouac.

“Their previous lives have become too stressful,” Dr. Schor said. “They have a lack of meaning because their jobs are too demanding.” 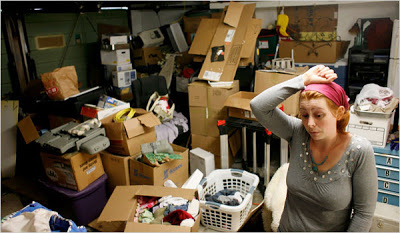 “It’s amazing the amount of things a family can acquire,” said Aimee Harris, who with her husband is giving away nearly all of it.
Mrs. Harris, who with her husband home-schools their son, Quinn, 5, and plans to do the same with their 15-month-old daughter, Nichola, agreed that there was something of the hippies in their quest: “the ideals, the peace and love, the giving and freedom.”

But she said they had no tolerance for idleness or drugs. “Any state that can be induced by drugs, the mind and body are already capable of,” she said.

Mrs. Harris grew up in Wisconsin with her mother and sister. They were so poor, she says, that they nearly froze to death in the winter and had to cook their meals in the fireplace. She developed a weight problem, ballooning to 200 pounds — she has since shed half of it — and suffered for years from the chronic pain disorder fibromyalgia, which she overcame, she says, by improving her diet.

In April, the Harrises began detailing their story on a blog (www.cagefreefamily.com). They were taken aback by some of the hostile responses. “Some people seem to be threatened that they’re not making the same choice,” Mrs. Harris said.

The timing was right, she said. They had been feuding with their landlord over conditions in the simple house they rent in Austin for $1,650 a month, and felt they had to get out.

At first they intended to auction what they owned. But “we were unable to define the worth of something we didn’t want or need,” she said. They finally decided to donate much of it to a children’s home in the Texas Hill Country and the bulk of the rest to an agency for the homeless in Austin.

But, Mrs. Harris said, their calls for pickups have gone unreturned, and they are now rushing to find new recipients. “You wouldn’t think, O.K., I’m going to give away all my fine things, but at the end of the day they’re still in the house,” she said.

“They don’t fit us anymore,” Mr. Harris said. Sure enough, his band was loose on his finger, but that was not what he meant. “They don’t fit our lifestyle,” he explained.

They have already given away some property, Mrs. Harris said, including their big-screen television, presented to a neighbor. It had bad karma anyway, she said: her father had gotten it as an employee of the year just before he was fired.

Their goal, she said, is to retain one personal carton per family member, plus bedding and kitchen utensils. They hope to sell or barter their two vehicles — a new Honda Odyssey minivan and a 2004 Dodge Intrepid — for a school bus or a four-wheel drive.

They are exchanging e-mail with a woman who has a remote cabin available in central Vermont. There is no electricity, Mr. Harris said, just propane power and a wood stove.

“We want to be in clean country with like-minded people with access to clean food,” Mrs. Harris said.

Mr. Harris does have a concern, though. He now telecommutes from his job as a Web systems administrator and is hoping to stay employed through the move. “The question is, Do I have Internet access in the woods?” he said.

They plan to travel first to Wyoming for the Rainbow Gathering, a free-spirited annual outdoor convocation, then head to Vermont.

In her garage strewn with cartons to be given away, Mrs. Harris shook her head. “Stuff, stuff that a family has,” she said.

Then she noticed a box of Christmas decorations, and at least for the moment grew wistful.

“When what goes?” Quinn asked.

Mrs. Harris seemed to struggle. “The stuff of our lives,” she said.

This entry was posted in RagBlog and tagged American Society, Austin, Consumer Culture. Bookmark the permalink.