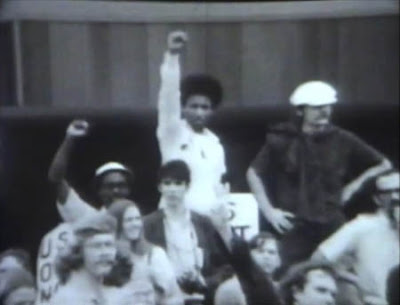 Austin native Patrick McGarrigle has put together a treasure trove of Sixties-era video footage culled from reels of film found in an alley off of Red River Street. “What They Sayin’: A Tribute to Austin Protesters” is a lovely, grainy remembrance of another era – civil rights demonstrations, the Cuban Missile Crisis, the Vietnam War. Some familiar faces appear onscreen, including Margret Hoffmann in a 1963 “Easter March,” in which a small group of peace activists walked from the Capitol to the gates of the former Bergstrom Air Force Base, and a camera-toting Alan Pogue, who had recently returned from the war. The video can be viewed on YouTube (search by title) or rented at Vulcan Video.

What They Sayin : A Tribute to Austin Protesters by Patrick McGarrigle