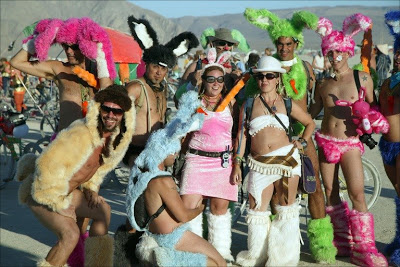 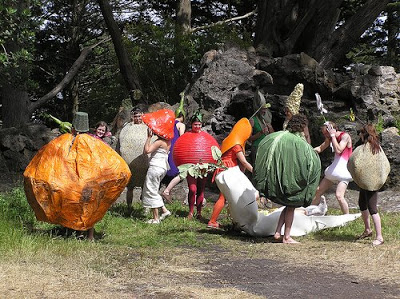 ‘Festival goers screamed at the top of their lungs, spun in endless circles, and threw up on each other’
By Jeff Lieber / August 5, 2008

Standing on the main stage at a world famous gathering of artists and left-leaners in Nevada on Monday, Barack Obama looked out on a sea of people dressed as ostriches and sexualized vegetables and told them he enjoyed their company much more than that of those who turned out to see John McCain at a supermarket last month.

“As you may know,” he told the thousands gathered, “not long ago, five people stood in the meat aisle to watch my opponent stare down a block of sharp cheddar and a set of sale-item cow testicles. I’ll take the scream of all you people hopped up on narcotics any day!”

Festival goers in the crowd, who had arrived from around the country to partake in the massive outdoor party, screamed at the top of their lungs, spun in endless circles, and threw up on each other numerous times in support of the presumptive Democratic nominee.

Obama said it was music to his ears.

“This is my first time here,” he said, “but I recognize that sound. It’s the sound of freedom.”

“I encouraged Michelle to take part,” Obama said to cheers. “I told her with a little luck she could be the only woman ever to serve as first lady and get so incredibly high on ecstasy that she would try and have sex with a Winnebago!”

The whole event was treated as just GOOD CLEAN AMERICAN CAMPAIGNING FUN BY AN AMERICAN AMERICAN CANDIDATE FOR THE PRESIDENCY OF AMERICA BY THE NATIONAL MEDIA, because, you see, there’s absolutely nothing strange or creepy about a presumptive nominee standing on a stage in front of a throng of inebriated people and suggesting the possible first lady approximate the gyrations of women in a Warrant video!