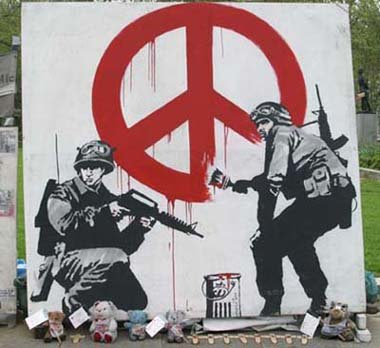 Obama might have used the Nobel stage to mark a break from [the] geopolitical approach to U.S. hegemony through militarism… This was clearly the intention of the Nobel Committee…

Princeton University Philosopher Cornel West brings such an infectious optimism to his social analysis that it is difficult to avoid discovering a sense of hopefulness in even the most mediocre of news.

Awarding the Nobel Peace Prize to an American president managing two active wars and commanding a military force spread throughout the globe seemed to offer little opportunity for a progressive spin. Yet, West quickly discovered a potentially positive edge. “It’s gonna be hard,” he offered during a lecture at a public library in Los Angeles, “to be a war president with a peace prize. Gonna be difficult. Very, very difficult.” The award it seemed could be a “pre-emptive strike for peace.”

West had captured a certain consensus that developed about the award nomination. U.S. President Barack Obama would be so overcome with the honor of receiving the prestigious award that it would trigger an immediate crisis of conscience that would call the country’s military adventures in the Middle East into question and perhaps even hasten a quick retreat.

Obama was certainly aware that he would walk in the footsteps of previous recipients such as Dr. Martin Luther King Jr., Archbishop Desmond Tutu and Mother Theresa. Panelists on the Nobel nomination committee were likely motivated by this neat equation when they arrived at their decision.

Unfortunately for West and others, the one person not in on the scheme was Obama. Instead of imbibing the spirit of peace, he delivered two bombshells. The first came prior to the Nobel ceremonies when he announced that the U.S. would send another 30,000 troops into Afghanistan, in an attempt to establish control of the AfPak border region. Larger than this, his speech at West Point Military Academy bought into large parts of the Bush war rationale.

The Afghanistan invasion, he argued, was forced upon the U.S. A natural response to the terrorist bombings of September 11, 2001. Nervous cadets in the crowd stood blank-faced as they realized that there are many more years of active combat to come. Though Obama made a vague reference to an 18 month time-frame for withdrawal, Secretary of Defense William Gates made the rounds with the media the following day to clarify that it would take years, at least two or three, before an exit from the war-torn country could be considered.

Put aside the escalation speech for a moment. The second bombshell, Obama’s much anticipated Nobel Prize acceptance speech, proves not only that there is almost no chance that the Democratic Party will bring an end to the wars, but that Obama himself has accepted the imperial mantle passed down through generations of American presidents.

Among the first casualties of a speech that can only be described as an expression of American chauvinism, were King and a non-Nobel recipient Mahatma Gandhi. Obama dispensed with them as naïve idealists. “As a head of state,” he argued, “I cannot be guided by their examples alone. I face the world as it is, and cannot stand idle in the face of threats to the American people. For make no mistake: evil does exist in the world.”

Obama went on to endorse the use of force as being based upon, “a recognition of history; the imperfections of man and the limits of reason” not “a call to cynicism.”

Two objections are obvious — one elucidated upon later in his speech, the other quickly tossed aside. First, the notion that war is curative to evil in general and that the U.S., in particular, is an acceptable dispenser of such a cure should raise a skeptical eye.

Obama went further by making the Orwellian claim that “the instruments of war do have a role to play in preserving the peace” and, in a language endorsed by every imperial president, “the United States of America has helped underwrite global security for more than six decades with the blood of our citizens and the strength of our arms.” History offers different lessons.

Far from a neutral operator interested only in the preservation of global peace, the U.S. has engaged in acts of military aggression that substantially contributed to the lessening of peaceful relations amongst nations. Sometimes, as in Iraq, there were direct material motivations. In other cases, political motives or the simple desire to express military superiority fueled the act of aggression.

The military invasions of Korea, Vietnam, Iraq, and Afghanistan so obviously violate the notion of the U.S. as peacemaker that little comment is needed. Even more insidious are the indirect military conflagrations underwritten by the U.S. government. The annals of Latin American history are littered with them — Nicaragua, Cuba, Chile, Guatemala, El Salvador and Operation Condor throughout the region.

Obama might have used the Nobel stage to mark a break from this geopolitical approach to U.S. hegemony through militarism. He could have announced the closure of at least a few of the more than 700 U.S. military bases worldwide. Perhaps Oslo was an ideal site to announce a 50% reduction in the more than 5,000 nuclear missiles the country has.

This was clearly the intention of the Nobel Committee and the hope of Cornell West — to create enough moral pressure to move the president a few steps away from the imperial mantle. No such luck. To have done so, would have necessarily required the help of King and Gandhi, who Obama had dismissed early on.

To say that his role as “a head of state” precludes him from employing the lessons of King and Gandhi is to deny some basic facts of history. Neither King nor Gandhi were intellectuals isolated from social policy or geo-political decision making. The two were not sequestered off from society, like cloistered monks, happy enough to invent a few intellectually engaging, but practically useless, ideas.

They were, instead, historical actors, able to craft new political realities through practical implementation of theories of non-violence. The consequences of which, in terms of both specific policies and broader political inspiration, had global reverberations that are still being felt.

The catch that now separates them from Obama is that both recognized the idea that it is people, mostly regular people, who make history and who often do so against the will of governments both foreign and domestic. India’s anti-imperialist campaign, carried out under Gandhi’s leadership, provides a stinging rebuke to the notion of military occupation. Equally, King’s brave opposition to the U.S. war in Vietnam sharply contradicts Obama’s claim that the U.S. has spent six decades underwriting global security.

Both men offer a notion of social solidarity through peaceful association that works from the local level up into national and international relations. Such lessons might have allowed the U.S. to avoid the military aggressions of the past and to play a significant role in supporting the creation of the kind of peaceful global economic development that both King and Gandhi championed.

Perhaps, in the end, West offers a useful concept, but the wrong social actor. It may eventually be difficult for Obama to manage two wars with a peace prize hanging from his neck. But Obama won’t be the one to determine that. He has left a significant opportunity to offer an alternative to the typical American imperial hubris at the podium in Oslo.

Now it is up to us regular folks, the ones who were so important to King and Gandhi’s movements in the past, to turn the Nobel Prize into a burden. A revitalized anti-war movement in the U.S. that reads deep into the inspirational wells of non-violent movements of the past could be next year’s nominee for the coveted prize. What a righteous replacement that would be for a president committed to war and occupation, arrogant enough to attempt to play this off as a part of global security.