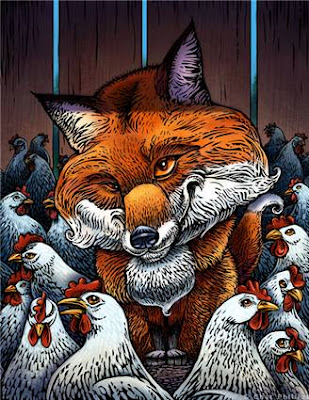 “A Fox in the Hen House,” woodcut by Chet Philips / The Painter Factory.
In response to former Vice President Cheney’s ongoing fear-mongering and divisiveness.

“Be safe,” we say, when taking leave of friend and family member –
“Be safe,” more nuanced than it was before that one September.
Where once the phrase was meant to ward against life’s daily mishaps
(the slip on icy pavement, or in the bathtub, perhaps),
now it invokes the shadowed threat of alien freedom fighters
blowing up the local market with their bombs, the blighters!

“Be safe,” we plead, not just at home, but in a public fiction,
as if the words were something more than private benediction.
A dubious concept has been formed that we may be protected
from threats at home, threats abroad, and threats yet undetected;
if only we’ll agree to live cocooned inside a fence,
and only venture out in groups, and frightened beyond sense.

This fear gives power to the goals of certain social forces
whose wealth and influence derive from their “fence-selling” sources.
Think of the legendary fox, who seals the henhouse door,
warning the hens of darker fates; they trust their jailer more
and more!
They fret that the sky will fall, and Fox predicts bad weather;
our own fears swirl, suspended, in a haze of shit and feathers.

Life is not safe, my dearest dears, nor can more fences save us;
thus, guard your liberty; that’s all that our Creator gave us!

This entry was posted in Rag Bloggers and tagged Poetry. Bookmark the permalink.

2 Responses to ‘Be Safe’ : A Poem by Mariann G. Wizard