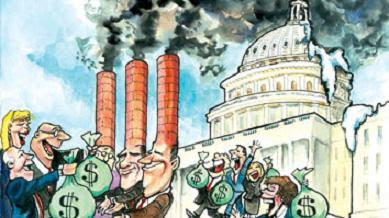 Illustration by KAL / The Economist.

The Energy Bill… sets us on two important courses: major support for development of alternative energy, and establishment of a cap-and-trade system to reduce emissions 80 percent by 2050.

The Energy Bill currently before Congress is probably the most important environmental legislation since the original Environmental Quality Act 37 years ago. It sets us on two important courses: major support for development of alternative energy, and establishment of a cap-and-trade system to reduce emissions 80 percent by 2050.

This is incredibly important. When Obama announced last November that he would commit the US to this, and to working on the new climate treaty that is to be signed this December, it resulted in the Chinese announcing they would do the same if the US did (and since they’re the #2 polluter on the planet, we can’t do a thing without them). And Brazil announced that if the international cap-and-trade system was established in the treaty, that Brazil would commit to an 80 percent reduction of Amazonian deforestation in 10 years — right now, tropical deforestation emits more carbon dioxide than all the cars, trucks and airplanes in use.

If the U.S. goes to the treaty signing with this bill signed into law, it establishes our leadership, and will likely bring in the Indians and the Indonesians, the other crucial new ones. If we do this, we might have a chance of meeting what the IPCC said last year — that we have (or had then) a 3-4 year window of opportunity left to establish the policies that will allow us to mitigate climate change.

In the Congress, the Republicans are unanimously opposed, and plan to bring up 100 plus amendments, one at a time, to be voted on in an effort to run the clock out on passing the bill altogether. It is crucial to maintain Democratic support. My congressman, Henry Waxman, is doing this and he is great at getting things done. Tireless. But the big problem is the centrist Democrats who face competitive races in the face of the Republican disinformation campaign now being run in their districts.

That’s why this report from “The Hill” blog is so important.

A committee chairman is threatening House leaders to either give him a role in shaping climate change legislation or risk losing every Democratic vote on his panel when the bill hits the floor.

Rep. Collin Peterson (Minn.), the outspoken Democratic chairman of the Agriculture panel, has been making it well-known that he wants his committee to have full jurisdictional authority over whatever climate change bill emerges from Chairman Henry Waxman’s (D-Calif.) Energy and Commerce Committee.

But Peterson is no longer making idle threats.

Peterson earlier this week met with the 26 Democrats on his panel and emerged with a “virtually unanimous” agreement that his committee members would stand with him in opposition to a climate change bill that didn’t adequately address the concerns of the agriculture industry, according to one of those Democrats.

“We’ve thrown a pitchfork in the sand,” the Democrat said.

Peterson wants a full markup to alter what he and other committee Democrats think are inadequate provisions on everything from fuel standards to renewable energy definitions to regulations governing the trading of carbon derivatives created through a cap-and-trade system, all of which have been written into the Energy and Commerce bill.

“We expect the bill to be re-referred to us by the [House] parliamentarian,” Peterson said in a brief interview Wednesday. “At this point my intention is to make it prohibit derivatives from being traded on this.”

That point alone would put Peterson and Waxman worlds apart.

Waxman has said that his staff is in early discussions with Peterson’s staff about the jurisdictional question — and noted he has not talked to Peterson directly. But he has also said that he believes his bill has fully addressed the concerns of the agriculture community.

Energy and Commerce Committee spokeswoman Karen Lightfoot said Waxman is continuing to work with Peterson and other committee chairmen on the bill.

“There’s been some things relating to agriculture that have been put together rather sloppily by the Energy Committee,” a Democrat on the Agriculture panel said. “If they don’t address those concerns, they’re not going to have the votes to pass this.”

Waxman and House Democratic leaders, who have been trying to patch together enough votes to clear the Energy and Commerce Committee, have been delicately tiptoeing around the issue of whether to send the bill to Peterson’s committee.

But they won’t be able to dance around that question too much longer, especially because Waxman appears to have the votes to move the bill out of his panel. And anything resembling a gentlemanly meeting of the minds between Energy and Agriculture Democrats is evaporating as an option, sources said.

There is not a single Democrat who sits on both panels. Further complicating the equation for party leaders is the fact that the Agriculture Committee is loaded with vulnerable and freshman Democrats — those members who most fear Republican attacks on what the GOP has labeled a “cap-and-tax” bill.

Eleven freshmen sit on the Agriculture Committee, and seven of them are in competitive reelection races, according to The Cook Political Report, which handicaps House and Senate contests.

Minnick said Wednesday that he was undecided on climate change.

Asked if his decision on how to vote will be influenced by Peterson, he responded; “Certainly, how the leadership reacts to Chairman Peterson’s concerns will have an impact on how all of us on the committee feel about this legislation.”

Leadership sources said that no final decisions have been made about how to deal with Peterson’s demands.

“The focus up until now has been getting through the Energy and Commerce Committee,” a senior aide said.

Peterson’s hostage-like situation presents a major problem for House Speaker Nancy Pelosi (D-Calif.), who has called climate change her flagship issue. Getting a bill through the House will be incredibly difficult, with an overwhelmingly majority of Republicans expected to vote no.

Turning a blind eye to Peterson would allow vulnerable members — many of them already queasy about climate change — plenty of cover to buck their leaders and vote against the bill on the House floor.

But acquiescing to the chairman has its own potential risks.

A number of Energy and Commerce Democrats have told Waxman he has their votes this week, but have hedged in indicating their support for anything other than what emerges from the Energy panel.

Rep. Rick Boucher (D-Va.), the key architect of an agreement with Waxman and Energy and Environment subcommittee Chairman Edward Markey (D-Mass.) allowing the markup to begin, on Wednesday said his support is conditional once the bill clears the Energy markup stage.

“Well, I am a yes vote in the committee,” Boucher said on C-SPAN Wednesday morning. “Then I will simply weigh the improvements that are made in the House and in the Senate.”

House Majority Leader Steny Hoyer (D-Md.) on Tuesday said that he anticipates climate change legislation will hit the House floor “probably in June or the first part of July.” Some aides said they interpreted that timeline to mean that leaders need time to work out jurisdictional issues even if Waxman manages to complete his markup this week.

House leaders, including Pelosi, will eventually determine the timeline of referrals to other committees.

There is a total of eight committees that can claim jurisdiction over the climate change bill — outside of Energy and Commerce and Agriculture, those panels include: Appropriations; Education and Labor; Financial Services; Natural Resources; Science; and Transportation and Infrastructure. But the only real saber-rattling has come from Peterson, a centrist lawmaker who voted against President Obama’s stimulus bill and has been highly critical of his agriculture-related proposals.

Waxman has acknowledged having direct talks about jurisdiction with only one gavel-wielding lawmaker: Ways and Means Committee Chairman Charles Rangel (D-N.Y.).

But Ways and Means member Chris Van Hollen (D-Md.), who is also the assistant to the Speaker, indicated that Ways and Means is not looking either for a jurisdictional fight or even to change the bill substantially.

“I wouldn’t expect to see any major surgery by the Ways and Means Committee,” Van Hollen told reporters on Tuesday.