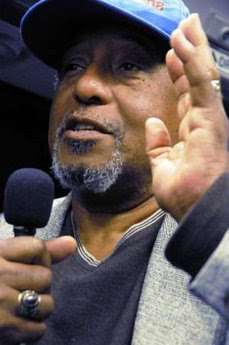 WASHINGTON (Reuters) – Bernard LaFayette, beaten and arrested 27 times during the civil rights movement, has spent his life working toward a goal the movement’s leader Martin Luther King shared with him hours before he was killed.

“I devoted my life to fulfilling Martin Luther King’s last request,” said LaFayette, who said King had been gearing up to take his teachings on nonviolence around the world and ensure that became fully embedded in society.

King would have been heartened by the inauguration of Barack Obama as the first black U.S. president, but his dream was focused on a bigger goal of curing economic disparities and ending what he called “the curse of war,” said LaFayette.

A trained minister and professor at Atlanta’s Emory University, LaFayette said Obama’s election underscored a desire for change at a time when the United States was again mired in an unpopular war and facing huge economic challenges.

“They didn’t vote for him because he was black. They voted for him … because they saw some hope and the possibility of change,” he said, adding that Obama embodied King’s principle of reaching out to one’s enemies and seeking reconciliation.

“They wanted to be part of something,” LaFayette added, remembering his own involvement as a young college student in peaceful sit-ins at white lunch counters, bus rides to integrate transportation in the segregated South, and later, voter drives to ensure all African-Americans could vote.

After King’s assassination in April 1968, violence and riots in more than 125 cities left 46 people dead and 2,600 injured in an outpouring of African-American outrage that flew in the face of King’s work on nonviolence, but made LaFayette even more determined to continue that mission.

Forty-one years later, LaFayette estimates he has trained and certified over 20,000 individuals in King’s six principles of nonviolence, including 3,000 Miami police officers and hundreds of inmates in one of Colombia’s most violent prisons.

He has helped set up 22 nonviolence centers in poor areas of the United States and places like Palestine and Nigeria,

“In the places where we’ve been able to institutionalize it, we’ve seen some dramatic results,” he said, citing a bill introduced in the Colombian parliament that would mandate nonviolence training in all schools, from kindergarten on.

LaFayette also worked with prisoners to dramatically reduce violence at the Bellavista prison in Colombia where inmates once cut off a guard’s head and played soccer with it.

This entry was posted in RagBlog and tagged Civil Rights, Nonviolence, Peace Activists. Bookmark the permalink.