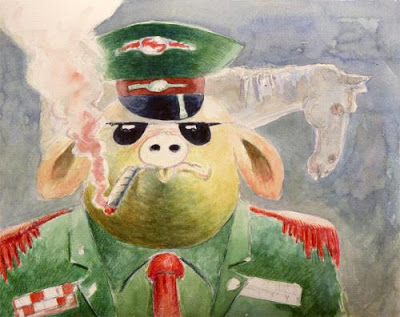 In February of this year, Agriculture Secretary Tom Vilsack announced that the Agriculture Department would no longer try to implement the National Animal Identification System (NAIS). The announcement immediately set the meat industry up in arms.

If you have never heard of the NAIS, don’t feel alone. While the meat industry has for years clamored for some sort of nationwide tagging and tracking system to ostensibly monitor livestock from farm to feedlot to food store, it wasn’t until the tragedy of September 11, 2001, that the industry saw its opening, using as its rationale the perceived threat of terrorists striking American agriculture.

The effort for a national tagging system was in place right after September 11 under the auspices of the National Institute for Animal Agriculture, composed of agricultural industry giants and manufacturers of identification technology systems, which immediately began lobbying for the implementation of the Animal Health Protection Act.

In the climate of anti-terrorist hysteria, the AHPA was very quietly passed by Congress in the middle part of 2002, and Congress instructed the Agriculture Department to implement the act. In May of 2005 the AHPA was further strengthened by Congress to specifically mandate electronic tagging and certain exemptions from the Freedom of Information Act.

The original intentions of the bill may certainly have been well-meaning. Fears of terrorist activity, occasional cases of Mad Cow and other diseases, and the consolidation of a variety of agricultural laws dating back to the 19th century prompted the initial writing of the bill.

But the Act also contained with it frightening germs of government control that slowly came to light, especially the right to inspect and seize livestock without a warrant and to enter any suspected premise with a warrant. The additional notion of a constant electronic surveillance of livestock also led to Big Brother fears.

The Act commissioned the Agriculture Department with implementation, and corporate consultants within the USDA developed a series of administrative suggestions which soon led to the National Animal Identification System.

Among the provisions of this developed NAIS were the three-stage requirements that every livestock premise and location in the nation be registered with the Department of Agriculture; that all individual swine, sheep, goats, cattle, horses, poultry (yes, every chicken), pigeons, and exotics (your pet llama, for instance) be tagged and identified to make known its location at all times (electronic tagging with a microchip was the suggested method); and that the Department of Agriculture be notified whenever any livestock was transferred to another location, including moving livestock to a a different pasture or taking a horse on a trail ride.

These requirements were even to include the single animal premises, the family pet goat, and animals not used for food. And Congress even entertained the idea of extending the computerized radio-frequency tagging to include household pets like Fido and FiFi.

From the start, the major supporters of NAIS have been the large agricultural conglomerates and lobbies: Monsanto, Cargill Meat Solutions, the National Pork Producers Council, Schering-Plough; electronic tagging companies like Allflex USA, Farnam, Temple Tag Company, and Y-Tex; and such professional associations as the Texas Veterinary Medical Association and the conservative Farm Bureau. In May of 2005, then Agriculture Secretary Mike Johanns announced that “we are moving forward to a mandatory system.”

Perhaps the biggest insult in the mandatory implementation of NAIS was having the costs of electronic tagging borne by the producers of the livestock. At an estimated cost of $13 a head in 2005 for herds less than 125, the cost could prove to be very expensive for a small goat producer, for instance, especially when goat prices at auction could bring much less than that.

After much negative feedback, the Agriculture Department decided that it would only pay one-third of the cost of implementing NAIS, with the balance coming from the producers and the state governments. The cost for implementing NAIS has been estimated at $550 million for the first five years.

From the start, perhaps intentionally, there was never much fanfare or media coverage of the NAIS. Opposition in response to the NAIS slowly developed as corporate lobbyists began the process of pushing forth the legislation in various state legislatures. Many Congressional representatives, when asked about the Act, simply had no inkling as to what the legislation was. In Texas, for instance, the bill passed unanimously in the Legislature in the closing weeks of the 2005 legislative session, and later many legislators responded that they were unaware of the provisions of the bill.

Specifically looking at Texas, it is interesting to trace the paper trail. In one example selected for this study, one of the sponsors of HB 1361, the Texas legislation to make Texas consistent with the NAIS, Republican Representative Rick Hardcastle of Vernon, chair of the House Committee on Agriculture and Livestock, received campaign contributions from Monsanto and the Texas Veterinary Medical Association. (As a footnote, Hardcastle certainly does not appear to be any friend of small farmers, as he also sponsored a failed bill allowing agricultural suppliers to place a lien on a producers second year crop if proceeds from the original crop were insufficient to pay off the entire amount owed). One can only guess the depth that financial contributions have played in the passage of the legislation.

As word about NAIS slowly reached the public and the livestock producers, grassroots opposition arose from all parts of the country. From Idaho to Virginia, New Mexico to Tennessee, and points in between, small livestock producers, organic beef producers, animal hobbyists, pet owners, and civil libertarians began reacting negatively to NAIS. Resolutions were passed at the county level, demonstrations were held nationwide. Ranchers in Bandera County, Texas, even threatened revolution.

The major concerns were that NAIS would drive small producers out of business, that the measure was intrusive and a violation of personal liberties; that it would weaken attempts at organic cultivation of livestock or cultivation of livestock for personal consumption. One criticism that was leveled at NAIS was that it “would actually subject the owner of a chicken to more surveillance than an owner of a gun.”

But the Ag Department continued to try and implement the NAIS through the back door. Under the guise of an agricultural “census” form sent out in 2006, requiring that the forms be returned “under penalty of law,” the USDA essentially attempted to do what Stage One of the NAIS wanted to do — premises registration.

And, in perhaps an attempt to use the carrot and not the stick, it appears that the Agriculture Department may have used the confidential information provided in the NAIS registry to selectively provide hay and forage to only NAIS registered cattle stranded during the 2008 blizzard in Colorado, the excuse being that they knew where those cattle were located because of the NAIS registration.

One of the ironic things about NAIS was that while it was touted to protect the nation’s food supply, it also came at a time when the Bush Administration had cut back the number of USDA inspectors and inspections. It is also apparent that large producers like Cargill and the National Pork Producers Council wanted some sort of Federal insurance for their overseas markets, especially with such nations as Hong Kong and Japan rejecting U.S. beef because of Mad Cow fears.

There is no doubt that there needs to be a greater purview of the nation’s packing and food services. Under the Bush Administration enforcement standards have dropped to practically nothing, with corresponding salmonella and e. coli outbreaks in a variety of foodstuffs, from peanut butter and hamburger meat to strawberries, cantaloupes, and spinach. Less expensive produce from overseas oftentimes does not have the same standards as in the United States, with resultant disasters.

It would appear that given the nature of the greed in the food industry, the first line of defense would be to reverse the neglect of the Bush years by enhancing inspection and enforcement. Additionally, we need to completely re-think our existing notions of food production.

Mad Cow Disease, for instance, can be eliminated if livestock is not fed ground bone meal from diseased animals, something the Agricultural Department finally wised up to in 2002. E. coli in cattle can be greatly reduced if mass feed lot production is eliminated and cattle are allowed to eat grass, which does not allow the development of e. coli. Chemical steroids which increase animal weight and production need to be eliminated. Production should return to a smaller, more environmentally friendly, organic, and hygienic scale.

So, will NAIS come back? Very possible. Secretary Vilsack stated that even while NAIS was currently abandoned, a “new strategy was needed.” And even while NAIS is no longer in effect, its enabling legislation, the Animal Health Protection Act, is still on the books. It may just be a question of time.

[Steve Rossignol is a working member of IBEW Local 520 in Austin and is a long-time member of the Socialist Party. He lives in Blanco County, Texas.]