Bill Freeland : Electric Cars Not All That ‘Green’ 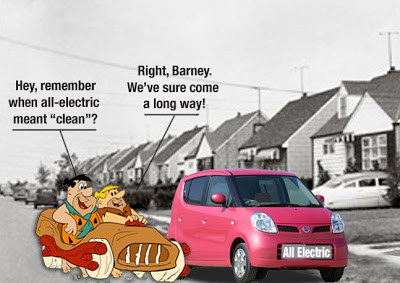 Conventional wisdom has just assumed electric cars are clean because there’s no tailpipe. So the focus has only been on convenience and cost. We need to go back to square one and ask: what’s the point, since they’re no cleaner than what we already have — plus they have a short range and long recharge times.

With new all-electric vehicles (EV’s to the trade) soon coming to market, there’s a drumbeat building that proclaims them the next stage of the green revolution. They promise a convenient, cost-effective and clean alternative to the gas guzzlers we’ve been hoping to replace for years.

The only problem: the data so far show that none of this is true. Most surprising, going electric is at least as bad for the environment as staying with the fuel-efficient, gas-powered cars on the road today.

This is not the conclusion one would expect, given the hype.

U.S. Department of Energy (DOE) lists one EV model currently available and eight more “coming soon.” Four others are promised by 2013. In terms of driving range, DOE reports these cars go only “about 100–200 miles” on each charge. And recharging the battery pack can take “4 to 8 hours.” Hardly convenient.

And the initial cost? Of those with prices available, DOE finds the average base sticker price will be $43,600. Not exactly cheap.

And then there’s the upkeep — particularly replacement batteries.

Replacements for the Tesla Roadster, the only EV model now available (for $109,000!), for example, cost around $36,000. Tesla, however, offers the option to pre-order them now (for $12,000) for delivery in seven years, the time the originals are predicted to wear out.

Still, there are likely to be some who will be willing to accept these limitations for the greater good of the planet. But even that is more than these cars can deliver.

Here’s the reason: Whether you’re getting your “juice” from a pump or a plug, that energy is produced from fossil fuels — either at an oil refinery or a coal-fired electric power plant. So either way, cars pollute. The difference is whether the emissions are discharged locally from your tailpipe or somewhere else by a electric generating facility.

To understand why, imagine you’re making a trip of 30 miles. In today’s typical fuel-efficient car, that takes about one gallon of gas, which according to the U.S. Environmental Protection Agency (EPA), produces 19.4 pounds of CO2.

Now consider the EV alternative. Their power consumption is measured, not in gallons of gas, but kilowatt-hours of electricity. To drive the same distance in the EVs now under development will take an average 10.6 kilowatt-hours of electricity. And according to the EPA, generating that much power results in 21.5 pounds of CO2 — which is two pounds more than burning a gallon of gas!

So bottom line: there’s no free ride for any automotive technology based on fossil fuels.

Future advances in EV technology could increase battery performance. And mass production could bring down the sticker price. But gas-powered cars that get 40 miles per gallon are also on the horizon. And nothing is likely to surpass their driving range.

So EVs are likely to be only a “second car” at best. Which means the jury is still out on whether EVs will ever make sense.

But for now, if you’re considering electric transportation, you’re limited by driving range, recharge times and higher sticker prices — and overall the planet is still worse off!

So, sadly for the environment, while all-electric cars are the new thing, they aren’t any better than what we have now.

7 Responses to Bill Freeland : Electric Cars Not All That ‘Green’