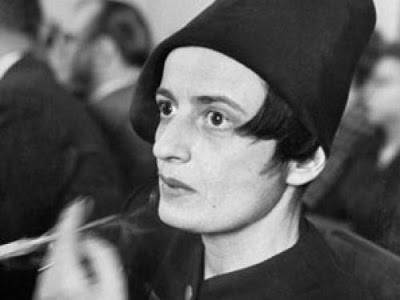 Ayn Rand advocates a promising methodology for ethical thinking, but has a deeply flawed vision of human nature, so her enterprise doesn’t quite pan out.(1) That’s too bad, because the methodology — to base ethical values on what is objectively and verifiably true about the world — is a good one, better than basing them on moral intuition or uncritically-accepted social norms or someone’s authority.

The answer goes all the way back to the Classical Greeks. We all want a fulfilling life, and we find out what that is by examining who and what we are. Knowing that, we have very good clues to two things: what we are good for or good at, and what is good for us. When we are doing what we are good at and getting what is good for us, then we are functioning well. And the internal experience of functioning well is fulfillment, a fulfilling life, in short: happiness. Aristotle sums it up:

[A clearer account of happiness] might perhaps be given, if we could first ascertain the function of man. For just as for a flute-player, a sculptor, or an artist, and, in general, for all things that have a function or activity, the good and the “well” is thought to reside in the function, so would it seem to be for man, if he has a function.(2)

What is good for us as human beings is to do well the uniquely human function.

And what is that? Rand follows Aristotle closely here. She says the essential function of the human being is to be rational. Unlike plants, which do not move and only react automatically to stimuli, and animals, which move around and act instinctively, humans think and reason.

Common to all three is the urge to survive and thrive. How humans do that is by the use of reason: “For man, the basic means of survival is reason.”(3) And “that which is proper to the life of a rational being [i.e. the exercise of reason] is the good [for that being]…”(4) So the ethical imperative for human beings is to exercise reason, to be rational.

So far, so good. We can quibble about whether the distinctions between plants, animals and humans are really so hard and fast, but as a first approximation the account is sound. But what shall we reason about? Certainly prudential calculation of risks and benefits in the economic sphere is a big part of it, as is scientific discovery and applied engineering to produce the means of sustenance.

By reasoning we figure out how to acquire what we need in order to survive. In large part that entails being productive, actively working to grow and manufacture the goods we require. For Rand, the ideal person is the one who thinks accurately and acts productively. She rails against thugs and dictators who steal from others without doing the work to produce what is stolen. (No doubt that is a big part of her appeal, because we have all been victims or fear being victims, or both.)

And all of this reasoning is to one end: our own survival and welfare. The goal is to “hold one’s own life as one’s ultimate value, and one’s own happiness as one’s highest purpose…”(5) She combatively calls this “the virtue of selfishness,” although a better characterization would be the virtue of rational self-interest. Thinking rationally about our own welfare is, according to this view, what humans do best and hence what we should do in order to survive, thrive and be fulfilled.

I have no argument with that, and in fact have discussed it before in my blog. What I find problematic is how this plays out in the social sphere. Her ideal is a society of rational actors, each out to satisfy his or her own interests, who trade goods and services with each other to maximize their wealth.

Each of us, in this view, is a homo economicus who seeks to obtain the highest possible well-being for himself or herself given available information about opportunities and constraints. Consequently, for Rand, the ideal human relationship is trade for mutual benefit, entered into freely and without coercion. She says so quite unambiguously:

The principle of trade is the only rational ethical principle for all human relationships, personal and social, private and public, spiritual and material.(6)

Well, that works fine for economic relationships, but does it make sense for personal relationships? I know someone who bases friendship on this principle. He openly looks for how others can be of use to him, and in turn he is willing to be used by them. Many people find this distasteful. Few entrust their deepest feelings and concerns to him.

Imagine a group in which loyalty is a must for survival. This is not implausible, because for hundreds of thousands of years that was exactly the case for all humans. Today as an extreme example we might think of a platoon of soldiers in battle, but to some degree it applies to any in-group.

It is precisely not to act as Rand would have you act, coldly calculating whether to continue to be loyal. Instead you need to act in the interests of the group unhesitatingly, to act swiftly and automatically on your intuition that loyalty is obligatory and disloyalty is so hideous as to be almost unthinkable.

Those whom the group suspects of being purely self-interested are less likely to become trusted members of the group than those whose loyalty is immediate and unquestioned. As group membership is crucial for survival, by her own criteria Rand’s recommendation is anti-life.

What I am talking about here is a moral emotion, an emotion that has been ingrained in us through hundreds of thousands of years of human evolution as beings who are ultra-social, obligatorily gregarious. We need each other, constantly and thoroughly. Rand sneers at morality based on instinct, intuition or feeling, but the instinct for affiliation is what has enabled humans to survive. 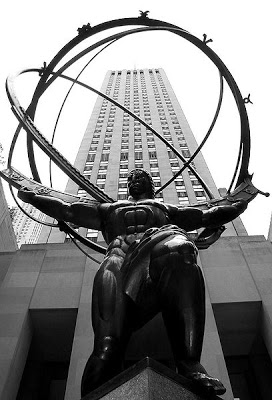 Atlas shrugging: New York City sculpture by Lee Lawrie.
Human societies are support systems within which individual weakness does not automatically spell death. Mutual dependence is key to our success. The moral emotion of loyalty is crucial for our survival. And so are others, such as willingness to devote resources to group welfare, cooperation, honesty, and many more.

We have two kinds of rationality, but Rand recognizes only one. We can think carefully and attentively, reasoning step by step from premises to conclusions. And we can react in the blink of an eye, assessing probabilities and choosing what to do without conscious thought. More often than not it is the latter that we employ.

Our minds do most of their work by automatic pattern matching. We do not pay attention, for instance, to how our visual systems translate excitation of receptor cells on the back of the eyes to recognition of objects and people; instead we just recognize things. Similarly, most of our social cognition occurs rapidly and automatically. We very quickly appraise people we meet as attractive or not, friendly or threatening, male or female, higher or lower in status than we are, etc.

Moral intuitions are a form of social cognition. Human beings come equipped with an intuitive ethics, an innate preparedness to feel flashes of approval or disapproval toward certain patterns of events involving other human beings.

But this is what Rand decries, instead praising a rationality that entails “a full mental focus in all issues, in all choices, in all of one’s waking hours,” a process of thought that is “precise,” “scrupulous, ” and “ruthlessly strict.”(7) Someone who actually acted that way would not last very long at all.

Rand overlooks two things: the role of what cognitive scientists call “hot cognition,” which I have been describing, and the essentially social nature of human reality. Nowhere in her essay is the word “compassion” to be found. Nowhere does she speak of empathy. She does mention love. She calls it a “spiritual payment given in exchange for the personal, selfish pleasure which one man derives from the virtues of another man’s character.”(8) Love as payment? If men are from Mars and women are from Venus, Rand appears to be from Jupiter.

Despite the inadequacies of Rand’s theory of human nature, however, there is something to be learned from her theory of ethics. As humans we do have the ability to reflect on ourselves and our situation, to exercise second-order mentation. We have the opportunity to judge whether the moral intuitions provided to us by our evolutionary heritage actually make sense in the present.

The feeling of loyalty to the group, crucial to the survival of small bands of hunters and gatherers, may not make sense when directed to sports teams or, less harmlessly, to governments that oppress portions of their populace and wage wars for the enrichment of the elites. We may not be able to fully divest ourselves of such feelings, but we can intervene when they arise and decide whether and in what manner to act on them.

And, more realistically, we can intervene ahead of time. We can cultivate habits of character that enable us to act in the heat of the moment as we have chosen in times of cool reflection.

Consider someone, perhaps a follower of Ayn Rand, who realizes that his excessively calculating attitude toward others is self-defeating. To overcome this deficiency he could deliberately cultivate habits of emotional openness, generosity and helpfulness. He could look for opportunities to speak the truth about what he is feeling, to be helpful to others, to give freely instead of hoarding.

At first, acting in these ways would feel uncomfortable and alien, but with time they would become second nature. And people would respond to him in kind.

And that is the real power of Ayn Rand’s ethics. Applied to a more accurate view of human nature, it encourages us, not to cogitate excessively over each situation, but to decide what kind of person we want to be. In true Aristotelian fashion it encourages us to cultivate virtues that enable us to live fulfilling lives in the company of others.

Rand, Ayn. “The Objectivist Ethics,” in The Virtue of Selfishness, pp. 13-39. New York: Signet Books, 1964. Also available as an on-line publication, URL = http://www.aynrand.org/site/PageServer?pagename=ari_ayn_rand_the_objectivist_ethics as of 3 July 2011.

[Bill Meacham is an independent scholar in philosophy. A former staffer at Austin’s 60’s underground paper, The Rag, Bill received his Ph.D. in philosophy from the University of Texas at Austin. Meacham spent many years working as a computer programmer, systems analyst, and project manager. He posts at BillMeacham.com, where this article first appeared.]

2 Responses to Bill Meacham : Considering the Philosophy of Ayn Rand