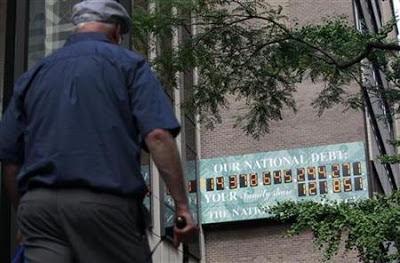 National Debt Clock in midtown Manhattan, July 13, 2011. Photo by Brendan McDermid / Reuters.
The national debt:
A tribute to militarism and the rich

During his much heralded 1963 “I Have a Dream” speech, Dr. Martin Luther King Jr. used the metaphor of a promissory note to describe the civil rights that had long been promised in theory, but denied in practice.

Today, America faces a promissory note of larger proportions — one that is much less of a metaphor. Democrats and Republicans are currently negotiating whether to allow the U.S. federal government to raise the debt ceiling beyond its current level of more than $14 trillion. Raising the ceiling is just one part of the talks. In the process, the two parties are drawing ever closer to a consensus on sharp reductions to federally funded Medicaid, Medicare, and Social Security programs.

The media has portrayed these negotiations as a sort of contentious quarrel between two political parties with vastly different ideas about the debt and the future of the economy. Such a distortion employs two falsehoods aimed at confusing the American public. The first is that the debt is the responsibility of the “American people.” Taken at face value, it seems that each person in the country is somehow personally responsible for the $14 trillion dollar budget deficit. This is clearly rubbish.

We should remember that nearly 50% of the federal budget, last year some $1.3 trillion, was spent on the military. Some of this was spent on maintaining the current bloated armed forces, but this figure has been vastly accelerated by the recent invasions of Afghanistan, Iraq, and the drone war in Pakistan.

These military adventures have been wildly unpopular with the American public and were rammed through thanks in large part to a series of carefully calculated lies concocted by the regime of George W. Bush and continued by Barack Obama. Much in the same way that people should not be held responsible for debts run up by dictatorial regimes, the American people should not be made to feel “personally responsible” for debts run up by their rulers against their will. Debts that served to enrich weapon makers and project American corporate hegemony over foreign markets.

The second major falsehood is that the deficit is produced by overly generous “entitlement” programs like Social Security, Medicaid, and Medicare. In fact, these programs are quite meager when compared to the welfare state enjoyed in many parts of Europe.

The “big three” public support programs grew out of upsurges in the labor and civil rights movements. They represent key gains for the poor and working class and, as such, should be vigorously defended. These successful programs should be viewed as blueprints for the expansion of human rights in America not, as the media would have people think, obstacles to a more “balanced” economy.

The deficit is more correctly understood as the direct result of tax policies designed and agreed upon by both Democrats and Republicans. This is where the squabble portrayed in the media falls apart. Simply put, since the mid to late 1970s, successive Democratic and Republican regimes have massively reduced the tax burden on the wealthiest Americans, thereby clearing the ground for the current crisis.

Some simple statistics can illustrate the change enacted by the two parties. When Jimmy Carter was elected president in 1976 the highest income bracket in the U.S. was taxed at a rate of 70%. Today the highest tax bracket stands at 35% and a myriad of loopholes drive that rate even lower. And corporate America is an even bigger offender when it comes to paying taxes, as many corporations this year, including General Electric, paid nothing in taxes. Is it any wonder then that the Federal Government now holds a $14 trillion debt?

The national debt is the clearest representation of the militarism and pro-rich taxation strategies that are rotting our country away. In no way, shape or form are the American people themselves — the poor and working class people who have been throttled by the rich for decades — responsible for this debt. Lay it at the feet of those who greedily consumed it — the war-making elite.

Undoubtedly, the debt ceiling will be lifted and, given the limited political options available at this moment, it should be lifted. Not lifting it would risk a national default that would unleash mass suffering on a scale unseen in this country and would give a free hand to the extreme union-busters and privatizers. This is simply not an option.

However, simultaneously, the American people should say with one loud voice that we will not be made to suffer for the debts accumulated by the elites. There are no acceptable cuts to the Medicaid, Medicare, and Social Security programs, regardless of whether the Congressional Democrats, Republicans, or President Barack Obama come peddling them.

Each must be resisted and each is evidence that the government is a tool of the rich and corporations. The simple solution to the deficit crisis, the only way to resolve this debate over the long term, is to make the rich pay.

A democratic socialist government, one that has interests of the poor and working class in mind, would certainly enact an immediate special tax that targets the richest 5% of the population and the top 500 corporations to wipe out the $14 trillion in debt. This would be a first step toward creating a just taxation system — that would take back trillions in wealth ciphoned off by the rich.

So, we might join in with the words of Dr. King, “we refuse to believe that the bank of justice is bankrupt.” It is high time that we open this bank of justice for business in America. We hold the keys.

[Billy Wharton is a writer, activist and the editor of the Socialist WebZine. His articles have appeared in the Washington Post, The Indypendent (NYC), Spectrezine, and the Monthly Review Zine. He can be reached at whartonbilly@gmail.com. This article was originally posted to the Bronx County Independent Examiner.]