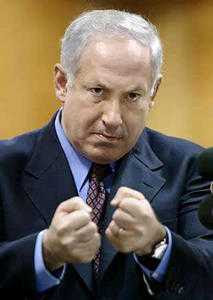 The selection of rightwing expansionist Binyamin Netanyahu to form the next Israeli government is being greeted with dismay by the Egyptian government, which remembers him for having derailed the Oslo peace process in the late 1990s.

Netanyahu has vowed to abandon negotiations with the Palestinians, and says he will expand the program of Israeli colonization of the Palestinian West Bank.

Since even before Netanyahu’s coronation was announced, the Israelis had been busy stealing more Palestinian land and planning more colonies on the purloined territory, Netanyahu will just be accelerating an already inexorable process.

Despite today’s faintly ridiculous attempt in the NYT to depict Netanyahu as a born-again pragmantist, in fact he rejects any withdrawal from the Palestinian West Bank by Israeli squatters, despite Israel’s commitment to pull back in the Oslo accords. Since the West Bank looks like Swiss cheese with regard to administration and settlement patterns, there isn’t a Palestinian state to be had there without an extensive Israeli pullback, and Netanyahu has never shown any interest in either pullback or Palestinian state.

Now his people are trying to revive this bizarre idea of giving Jordan some sort of vague authority over the West Bank Palestinians as a way of denying them statehood in their own right. Jordan’s government has been under severe pressure to expel the Israeli ambassador over the brutal Gaza campaign, and any such active collaboration with Israel to repress the West Bankers would risk toppling the Hashemite throne. King Hussein once accused Netanyahu of single-handedly destroying every positive thing the Jordanian monarch had worked for.

Netanyahu is a train wreck for the Middle East. He is willing to ally with Avigdor Lieberman, an open racist who is gunning for the 20 percent of Israel’s citizen population that is Palestinian. Netanyahu wants a war with Iran, and when the Israeli Right wants a war nowadays, they usually want our children to fight and die in it for them. The 1996 “Clean Break” Neoconservative policy paper advocating a war on Iraq was written for Netanyahu. (They are not satisfied with picking our pockets for their weapons and colonization projects). Netanyahu will further oppress and brutalize the Palestinians, which he will keep in a slave-like condition of statelessness, and from whom he will steal what little property they have left. Last time he was in office he went around poisoning his enemies, for all the world like the Bulgarian KGB in the old days.

Netanyahu is the devil’s gift to international terrorism, which his policies will provoke. Fifty years from now, the turn of Israel to the hard right will be looked back upon as the beginning of the end of Israel, the time when the crucial decisions were made that rendered it impossible for the Israelis to stay in the Middle East in the face of the increasing popular anger Netanyahu will have provoked in 1.5 billion Muslims. No, Israel cannot be defeated on the battleground. But the French colons in Algeria were never really defeated on the battleground, either, nor were the thousands of Britons who had ruled India.

More immediately, all Americans will have reason to rue Netanyahu’s return to power, since the American Israel Public Affairs Committee and other elements of the powerful Israel lobbies will pull Congress around to support Likudnik policies in the next few years.

And it won’t even be allowed to protest where Netanyahu will take America.

This entry was posted in RagBlog and tagged Israel, Palestine, Right Wing. Bookmark the permalink.