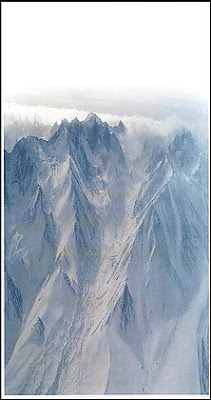 On Nov. 27, 2004, a Presidential Airlines flight, known as “Blackwater Flight 61 crashed into a mountain in Afghanistan, killing all six on board: three crew members and three U.S. soldiers. The families of the soldiers have sued the contractor. Photo: National Transportation Safety Board
Want “Blackwater 61” lawsuit
determined by religious doctrine
by Joseph Neff and Jay Price / June 19, 2008

RALEIGH – To defend itself against a lawsuit by the widows of three American soldiers who died on one of its planes in Afghanistan, a sister company of the private military firm Blackwater has asked a federal court to decide the case using Islamic law, known as Shari’a.

The lawsuit “is governed by the law of Afghanistan,” Presidential Airways argued in a Florida federal court. “Afghan law is largely religion-based and evidences a strong concern for ensuring moral responsibility, and deterring violations of obligations within its borders.”

If the judge agrees, it would essentially end the lawsuit over a botched flight supporting the U.S. military. Shari’a law does not hold a company responsible for the actions of employees performed within the course of their work.

Erik Prince, who owns Blackwater and Presidential Airways, briefly discussed the lawsuit in a meeting Wednesday with editors and reporters at The News & Observer. Prince was asked to justify having a case involving an American company working for the U.S. government decided by Afghan law.

“Where did the crash occur?” Prince said. “Afghanistan.”

The crash of Blackwater Flight 61 occurred in the rugged mountains of central Afghanistan in 2004, killing three soldiers and the three-man crew.

The widows of the soldiers sued Presidential Airways, Blackwater’s sister company, which was under contract with the U.S. military to fly cargo and personnel around Afghanistan.

Presidential Airways argued that the lawsuit must be dismissed; legal doctrine holds that soldiers cannot sue the government, and the company was acting as an agent of the government.

Last year, a series of federal judges dismissed that argument.

In April, Presidential asked a federal judge in Florida to dismiss the lawsuit because the case is controlled by Afghanistan’s Islamic law. If the judge agrees that Afghan law applies, the lawsuit would be dismissed. The company also plans to ask a judge to dismiss the lawsuit on the constitutional grounds that a court should not interfere in military decision-making.

The National Transportation Safety Board has blamed the crash on Presidential for its “failure to require its flight crews to file and fly a defined route” and for not providing oversight to make sure its crews followed company policies and Pentagon and federal aviation safety regulations.

Speaking of Blackwater: Jeremy Scahill: Blackwater is Still in Charge, Deadly, Above the Law and Out of Control / AlterNet / June 19, 2008

Thanks to Ted Samsel / The Rag Blog