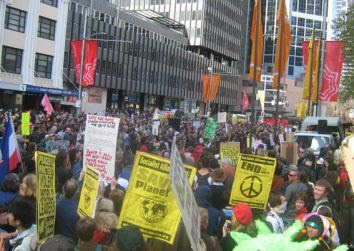 SEPTEMBER 8 — Alex Bainbridge, chairing the Stop Bush/Make Howard History anti-APEC rally told the gathered crowd that there were 10,000 people gathered at Sydney’s Town Hall. A contingent of hundreds of high school students arrived at Town Hall, chanting “Troops out now!”, while a contingent of hundreds of trade unionists arrived chanting “The workers united will never be defeated!”

Despite provocative policing, and the presence of a tiny group of masked neo-Nazis led by retired Macquarie University academic Andrew Fraser, the rally was peaceful. Police behaviour included confiscating polls off banners, despite the fact that this was outside the “declared zone” where the APEC laws would have allowed them to do this; driving the Public Order and Riot Squad vehicles, including the new $600,000 water cannon, sirens blaring, past the Town Hall at 8.45am while rally organisers were setting up; and sealing the exits to Hyde Park after protesters had marched there.

However, protesters followed the calls of rally organisers not to be provoked and there were only a handful of arrests: mostly of neo-Nazis but also including two protesters for taking their clothes off.

Other protesters were arrested after the rally, including two activists on the list of “excluded persons” (despite their not being in the zone they were excluded from) who were briefly detained before being released without charge.

A welcome to country was given by Jenny Munroe, who linked PM John Howard’s recent military/police intervention into Northern Territory indigenous communities with his nuclear diplomacy at the APEC summit. She pointed out that the latter would not only mean more uranium mining on aboriginal land, but would encourage plans for nuclear waste dumps in indigenous communities.

She also spoke about the situation in Palm Island, where the police officer who beat Mulrunji to death in 2004 walked free while Lex Wotton has been jailed for protesting against the murder. “The legal system needs to be thrown out, we need to start working on a new one”, she said.

Greens Senator Kerry Nettle also spoke about Howard’s APEC uranium deals, as well as pointing out that Howard, US President George Bush and NSW Premier Morris Iemma were “in bed with the coal industry”. She called for renewable energy as genuine solution to climate change rather than the APEC leaders preferred phantom solutions: “clean” coal and “safe” nuclear energy.

She condemned the anti-worker agenda of APEC and called for the scrapping of all of Howard’s Work Choices, as opposed to scrapping just bits of it as ALP “ooopsition” leader Kevin Rudd was proposing.

The march was led by the Maritime Union of Australia and the Fire Brigade Employees Union (FBEU). The MUA’s Warren Smith told the rally that the walls surrounding the APEC meeting zone did not symbolise keeping protesters out but that capitalism was in jail, saying that whenever one of the organisations of global capitalism, such as the G8, the G20, the International Monetary Fund or the World Trade Organisation, met, they had to do so behind walls to hide from protests. He said that APEC means war, driving down wages, nuclear power and the profits of big corporations. “We say no!”, he said.

Emphasising the importance of peaceful protest, he congratulated the rally for having the organisation and discipline needed to “throw Howard into the dustbin of history”. He said that the time of neoliberalism and war was up because “the people are here!”

The FBEU’s Simon Flynn linked the struggles of workers, Indigenous people, environmentalists and anti-war activists saying it was “time to unite in a new movement”. He said that the discussions of the 21 leaders at APEC had nothing to do with democracy: “This is democracy!” he said, referring to the assembled crowd. Condemning Howard for the war in Iraq and for Work Choices he said that the ALP was equivocating. Reminding protesters of the ALP’s origins as a party to represent workers’ unions he said “now is not the time for the tail to wag the dog”.

Other speakers included US Iraq war veteran Matt Howard, Keysar Trad from the Islamic Friendship Association and Pip Hinman from the Stop the War Coalition, and a statement was read from Melbourne trade unionist Omar Merhi.

There was a very diverse attendance. Theresa Suddaby came from Bulla Burra in the Blue Mountains, and told Green Left Weekly: “I’m here protesting for the right to protest.” Peter McGregor, who came to town on the “Stop Bush Express” from Newcastle, explained to GLW why he was protesting: “Whenever war criminals such as George Bush and John Howard appear in public, it’s important people come out also in public, to protest them.”

Police built blockaded streets adjoining the march route using converted buses that they had planned to use as portable holding cells.