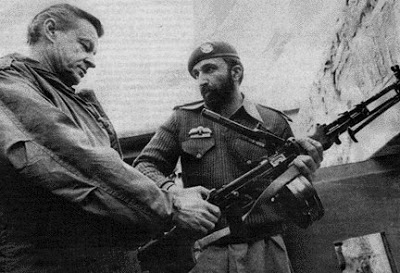 So if you’re a Rag Blog reader who’s also a U.S. anti-war activist,this might be a good time for you to revisit the post-1978 history of the people in Afghanistan.

Following the April 27, 1978, “Saur [April] Revolution” in Afghanistan, a Revolutionary Council of the People’s Democratic Republic of Afghanistan [PDRA] was established on May 1, 1978, with People’s Democratic Party of Afghanistan [PDPA]-Khalq faction leader Noor Mohammad Taraki as its president and premier, PDPA-Parcham faction leader Babrak Karmal as vice president, 30 PDPA civilians as members and five pro-PDPA military officers as members; and on May 6, 1978, Taraki announced that Afghanistan was now a non-aligned and independent country.

Soon afterwards, however, control of the post-April 1978 revolutionary government of Afghanistan was shifted to the PDPA’s Politburo.

According to an article by John Ryan, titled “Afghanistan: A Forgotten Chapter,” which appeared in the November/December 2001 issue of Canadian Dimensions, labor unions “were legalized, a minimum wage was established, a progressive income tax was introduced, men and women were given equal rights, and girls were encouraged to go to school,” by the post-April 1978 revolutionary government in Afghanistan.

All debts owned by Afghan’s peasants and small farmers were also abolished, and 200,000 rural families were scheduled to receive redistributed land in accordance with the PDPA government’s land reform program. In addition, the PDPA government elevated the Uzbek, Tucoman, Baluchi and Niristani minority languages to the status of national language in Afghanistan, deprived members of the Afghan royal family of their citizenship, and began building hundreds of schools and medical clinics in the Afghan countryside.

A female member of the PDPA/PDRA’s Revolutionary Council, Dr. Anahita Ratebzad, also wrote, in a May 28, 1978 Kabul Times editorial, that “privileges which women, by right, must have are equal education, job security, health services, and free time to rear a healthy generation for building the future of the country,” and “educating and enlightening women is now the subject of close government attention.”

Once the PDPA had gained control over the Afghan government, however, internal party conflict between the leaders of its Parcham faction and its Khalq faction developed again, and at a June 27, 1978, PDPA Central Committee meeting, “Karmal and other leading Parchamis were shunted off to lives in glorified exile as ambassador” and “virtually ousted… from the government” by the Khalq faction, according to Angelo Rasanayagam’s Afghanistan: A Modern History.

A number of Parcham activists were then also imprisoned by the PDPA-Khalq faction’s regime. Besides Taraki, the PDPA-Khalq faction in late June 1978 was also now being led by Hafizullah Amin — the Columbia University Teachers College graduate (who some Afghan leftists subsequently claimed may have been previously recruited by the Central Intelligence Agency when he studied in the United States — during the Cold War period when the Afghan monarchical government was considered by the CIA to be too friendly with the Soviet Union.)

Karmal, who had been appointed Afghanistan’s ambassador to Czechoslovakia, apparently then met with “Parchamis who were still in place, notably Defense Minister Qadir and the Army Chief of Staff, General Shahpur Ahmedzai,” and a PDPA-Parcham faction internal coup against the PDPA-Khalq faction’s Taraki-Amin regime was planned for September 4, 1978, according to Afghanistan: A Modern History. But in August 1978 Amin learned of the planned coup, arrested Qadir and Ahmedzai, and “went on a witch-hunt for Parchamis, eliminating them and their sympathizers from key government and party posts and filling the jails with them,” according to the same book.

Meanwhile, right-wing Islamic opponents of the Taraki-Amin regime in rural Afghanistan, soon began to organize against the mixing of sexes in the classrooms of the post-Saur Revolution’s literacy campaign, and against its democratic reform of Afghan’s marriage laws — which would now abolish forced marriages, insure freedom of choice of marriage partner, and make 16 years the minimum age for marriage.

But the anti-feminist rural Afghan religious leaders, rural village heads, and rural elders who opposed the literacy campaign and marriage law reforms — along with their followers — were also either repressed in large numbers by the PDPA-Khalq regime in 1978 or fled to Pakistan during the last six months of 1978. As James Lucas’s recalled in his recent article, “America’s Nation-Destroying Mission in Afghanistan,”

Efforts to introduce changes involved a degree of coercion and violence directed mainly toward those living in areas outside of Kabul where the vast majority of the population lived in mountainous, rural and tribal areas where there was an exceptionally high rate of illiteracy. Steps to redistribute land were initiated but were met by objections from those who had monopoly ownership of land.

It was the revolutionary government’s granting of new rights to women that pushed orthodox Muslim men in the Pashtun villages of eastern Afghanistan to pick up their guns. Even though some of those changes had been made only on paper, some said that they were being made too quickly.

According to these opponents, the government said their women had to attend meetings and that their children had to go to school. Since they believed that these changes threatened their religion, they were convinced that they had to fight. So an opposition movement started at that point which became known as the Mujahideen, an alliance of conservative Islamic groups.

The anti-feminist Afghan alliance of Sunni Islamic party groups, also known as the “Peshawar Seven,” soon called for a jihad, or holy war, against the post-April 1978 revolutionary government in Afghanistan. And by the end of 1978, some 80,000 Afghans from the eastern half of Afghanistan had reached Pakistan,” and “eight training camps were established in the North West Frontier Province” by Pakistan’s right-wing military dictatorship “to turn simple Afghan refugees into guerrilla fighters,” according to Afghanistan: A Modern History.

A report in the February 1979 issue of the Swiss newspaper Neue Zurcher Zeitung indicated that the CIA apparently initially provided Pakistan’s military dictatorship with the money needed to purchase weapons for the anti-feminist Afghan refugees that it began training in late 1978. According to John Cooley’s 2001 book Unholy Wars: Afghanistan, American and International Terrorism, “Pakistan’s Inter-Services Intelligence (ISI) officers and a few key Afghan guerrilla leaders were first secretly schooled in the service training centers of the CIA and the U.S. Army and Navy Special Forces in the United States” and “main training took place under the watchful eyes of the Pakistanis and sometimes a very few CIA officers in Pakistan…”

In response, the Taraki-Amin regime signed a Treaty of Friendship and Cooperation with the government of the neighboring Soviet Union on December 5, 1978, agreeing to provide more Soviet military advisors and Soviet military aid for the PDPA-Khalq government in Afghanistan.

Yet “in January 1979 a first contingent of some 500 [anti-feminist Afghan guerrillas] under the banner of Gulbuddin Hekmatyar’s Hizbi-i-Islami” [group] entered Kunar province, attacked Asadabad, its principal town, and captured a strategically located government fort,” according to Afghanistan: A Modern History. Hekmatyar’s followers had initially “gained attention” in Afghanistan “by throwing acid in the faces of women who refused to wear the veil” according to journalist Tim Weiner.

In the western half of Afghanistan, Afghan Shiite Islamic party groups also had prepared for armed resistance to the post-April 1978 revolutionary government, and in February 1979 the U.S. Ambassador to Afghanistan, Adolph Dubs, was taken hostage by an anti-government Shiite Islamic group that demanded the release by the PDPA-Khalq government of a political prisoner. The U.S. Ambassador was then killed during a shootout between Afghan police and his anti-government captors.

The following month, hundreds of Afghan government officials (who were in charge of introducing the women’s literacy program in the western city of Herat) and their Soviet advisors — along with members of their families — were apparently killed by rebellious local Afghans and a garrison of mutinous Afghan government soldiers in Herat on March 24, 1979. There followed major attacks in Jalalabad, in Pattia province, and in Gardez during April 1979, by “Mujahideen organized from Pakistan by Syyed Ahmd Gailani and Mujaddidi,” according to Afghanistan : A Modern History.

Even before Democratic President Carter secretly signed a July 3, 1979, directive to officially provide covert military aid to the anti-feminist Islamic guerrillas in Afghanistan (that Pakistan’s ISI agency had covertly trained to seek a regime change in Afghanistan), both the Tarkai-Amin regime and the government of the Soviet Union had accused Pakistan’s military dictatorship of illegally intervening in the internal affairs of Afghanistan, in violation of international law.

As Afghanistan: A Modern History observed, “both Kabul and Moscow were convinced, not without reason, that the spreading insurrections in Afghanistan were encouraged, armed and directed by Pakistan.”

Yet Pakistan’s military dictatorship apparently lied about its role in illegally intervening in the internal affairs of Afghanistan following the April 1978 Saur Revolution in Afghanistan . As Afghanistan : A Modern History recalled:

Whenever such charges were publicly leveled at Pakistan, they were flatly denied. Pakistan was able to maintain the fiction… The whole support program was a very covert operation from beginning to end, conducted in… secrecy by the ISI whose chief, General Akhtar, reported directly to [then-Pakistani Dictator] Zia… The fiction was maintained even when the level of support reached massive proportions after the United States became involved…

Prior to the introduction of large numbers of Soviet troops into Afghanistan by the Brezhnev regime in December 1979, the Carter Administration apparently also was not completely honest about the degree to which it was working for a regime change in Afghanistan by illegally intervening in Afghanistan’s internal affairs in early 1979. For example, as Steve Galster observed in “Afghanistan : The Making of U.S. Policy 1973-1990”:

According to a former Pakistani military official who was interviewed in 1988, the U.S. Embassy in Islamabad had asked Pakistani military officials in April 1979 to recommend a rebel organization that would make the best use of U.S. aid. The following month, the Pakistani source claimed, he personally introduced a CIA official to Hekmatyar who… headed what the Pakistani government considered the most militant and organized rebel group, the Hizbi-i Islami…

And according to John Cooley’s 2001 book, Unholy Wars: Afghanistan, America and International Terrorism, during “the summer of 1979… National Security Advisor Zbigniew Brzezinski got Carter to sign a secret directive for covert aid to the Mujahideen resistance fighters.” As Brzezinski — a former Columbia University Professor of Government and former policy advisor to Barack Obama — confessed in a January 15, 1998 interview with the Paris newspaper Le Nouvel Observateur:

According to the official version of history, CIA aid to the Mujahideen began during 1980, that is to say, after the Soviet army invaded Afghanistan, 24 Dec. 1979. But the reality, secretly guarded until now, is completely otherwise. Indeed, it was July 3, 1979 that President Carter signed the first directive for secret aid to the opponents of the pro-Soviet regime in Kabul. And that very day, I wrote a note to the president in which I explained to him that in my opinion this aid was going to induce a Soviet military intervention… We didn’t push the Russians to intervene, but we knowingly increased the probability that they would.

The Unholy Wars book also observed that “Charles Cogan, until 1984 one of the senior CIA officials running the aid program… agrees with Brzezinski… that the first covert CIA aid to the Afghan resistance fighters was actually authorized fully six months before the Soviet invasion — in July 1979…”

As a then-classified U.S. State Department Report of August 1979 stated, “the United States larger interests… would be served by the demise of the Taraki-Amin regime, despite whatever setbacks this might mean for future social and economic reforms in Afghanistan,” according to James Lucas’ recent “America’s Nation-Destroying Mission In Afghanistan” article.

1 Response to Bob Feldman : A People’s History of Afghanistan / 9