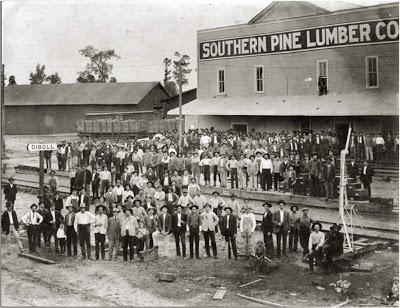 Southern Pine Lumber Company workers at the company store, Diboll, Texas, about 1907. Photo courtesy of The History Center, Diboll. Image from Texas Beyond History.
The hidden history of Texas

[This is the fifth section of Part 9 of Bob Feldman’s Rag Blog series on the hidden history of Texas.]

During the 1890-1920 period of Texas history a post-1900 revival of Texas labor and farmer activism developed into a worker-farmer political alliance which produced some pro-labor laws between 1900 and 1915 in Texas.

As F. Ray Marshall recalled in his 1967 book Labor in the South,

In 1900, the railway brotherhoods and the Texas State Federation of Labor [TSFL] established the Joint Labor Legislative Board of Texas. The board formed an alliance with the Farmers’ Union, organized in 1902.

The Texas Joint Board was instrumental in securing the passage of favorable labor legislation during the 1900-1915 period, particularly: a 1901 measure outlawing the issuance of company checks, tickets or symbols of any sort redeemable only in merchandise at company stores; a child labor law — first adopted in 1903 and improved in 1911; a 1907 law giving railroad telegraphers an eight-hour day; an eight-hour shift for state employees and persons working on government contracts in 1911; a 1913 law establishing a 9-hour day and a 54-hour work week for women in manufacturing; anti-blacklisting and mine safety codes in 1907; apprenticeship requirements for locomotive engineers and conductors, a full crew law for passenger trains and a requirement that railroads repair their equipment in Texas shops; and workmen’s compensation for railroad workers in 1909; workmen’s compensation was extended to industrial workers in 1911; a bureau of labor statistics in 1909 to enforce protective labor legislation; and the abolition of the convict lease system in 1910.

But by 1915 the political clout of Texas’s labor movement had begun to decline after cooperation with insurgent Texas farmers “began to weaken in 1911 when the Farmers’ Union secured the passage of the bill — over labor’s objections — to establish a textile mill in the Rusk penitentiary, and in 1913 when the farmers lobbied against the railway brotherhoods’ ‘full crew.'” Texas’s “Farmers’ Union had [by then] been infiltrated by the anti-union Commercial Secretaries Association,” according to Labor in the South.

Formed in Rains County, Texas, in 1902, the all-white Farmers’ Educational and Cooperative Union of America (aka The Farmers’ Union) excluded Texas’ African-American farmers as members. Yet “country teachers, mechanics, physicians, ministers of the gospels and publishers” who were not farmers, but who were white, were apparently allowed to be members, according to Labor in the South.

The Texas labor movement’s political clout also decreased again by 1915 after Texas State Federation of Labor leaders complained that five of the six seats on the Joint Labor Legislative Board of Texas should not still be held by railroad brotherhood representatives — because the number of railway brotherhood members in Texas was only 16 percent of the 9,000 Texas workers who were members of the Texas State Federation of Labor-affiliated unions in 1906.

But despite the legislative gains made by Texas workers between 1900 and 1915, this was also a period when dissatisfied Texas workers in the lumber industry of East Texas — 7,958 of whom were African-Americans who worked mostly as laborers in Texas lumber industry mills — joined lumber industry workers of adjacent Southern states in a region-wide strike. As Philip Foner recalled in his History of the Labor Movement in United States , Vol. IV: The Industrial Workers of the World 1905-1917:

The magnificent forests of… East Texas… were literally stolen by the lumber companies from the public domain… They were handed over to the lumber kings for prices ranging from 12.5 cents to 75 cents an acre…

Having grabbed these forests — one company owned 87,000 acres in a single tract in Western Louisiana and Eastern Texas — the companies proceeded to operate them as feudal domains, filling the towns with gunmen whom the authorities had commissioned as deputy sheriffs, and jailing anyone who questioned their rule…

Following a… study in Texas, the Commission on Industrial Relations found “that in such communities, political liberty does not exist and its forms are hollow mockery… Free speech, free assembly, and a free press may be denied as they have been denied time and again, and the employer’s agent may be placed in public office to do his bidding…”

So, not surprisingly, according to Foner’s 1965 book:

The first widespread revolt of the lumber workers occurred in the autumn of 1907…The lumber companies, taking advantage of the panic of 1907, issued orders to cut wages 20 percent or more, and lengthened the hours of work. Against these orders, all the lumber workers in Western Louisiana and Eastern Texas rose en masse, and in a spontaneous general strike closed hundreds of mills…

Although most of the striking Texas lumber workers soon returned to work after “promises of wage increases when economic conditions improved were made” to them by lumber company managers, according to the same book, “not only were the promises not kept, but the oppression grew even worse” over the next few years. 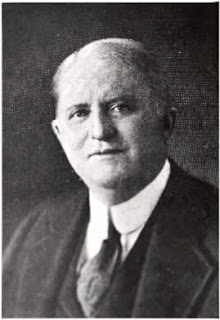 Texas labor baron John Henry Kirby, circa 1925. Image from Texas Beyond History.
So after dissatisfied activist workers in the U.S. lumber industry joined together to create a national industrial union of lumber industry workers, the Brotherhood of Timber Workers [B. of T.W.] in June 1911, “the B. of T.W. spread rapidly over Texas,…recruiting Negroes and white lumberjacks, mill workers, tenant and small farmers who worked in the lumber industry for parts of the year, and town craftsmen,” according to Foner’s History of the Labor Movement in the United States. The same book also described how the corporations that still controlled the lumber industry in Texas between 1890 and 1920 then chose to respond to the success that the Brotherhood of Timber Workers industrial union organizing drive in Texas was achieving in 1911:

The union’s rapid growth had alarmed the employers. In the summer of 1911, individual mill owners began to take action against the organization, requiring all workers to sign a card declaring that they would not join the union. This caused several strikes and a number of mills shut down, discharged every Brotherhood member, and kept closed down for weeks…

The Southern Lumber Operators’ Association was… reactivated and a secret meeting was called for July 19 [1911] at New Orleans. The meeting was attended by some 150 lumbermen from Texas, Arkansas and Louisiana… The meeting was controlled by John H. Kirby, the largest lumber operator in Texas, who… directed the activities of the organization. A one-time president of the National Association of Manufacturers, Kirby was determined to smash the Brotherhood of Timber Workers.

The leading speech at the session was delivered by Kirby. He began by announcing that “whenever any efforts are discovered to organize unions, the mills will be closed down and will remain so until the union is killed.” …Arrangements were worked out between Kirby and [then-American Federation of Labor Leader Samuel] Gompers for the Southern Lumber Operators’ Association to drive its workers out of the B. of T.W., and, after that union was destroyed, to extend recognition to the A.F. of L. which would send its representatives into the lumber camps and mills to recruit the skilled, white craftsmen…

During the next few months over 300… mills in Texas, Arkansas, and Louisiana were closed down, and union men were locked out of, or blacklisted from, every mill within the Association’s sphere of influence… “Good Citizens” Protective Leagues… were organized in Eastern Texas… to break up local meetings of the Brotherhood and to intimidate its speakers and organizers… During the summer and fall of 1911 between 5,000 and 7.000 of the most active members of the Brotherhood, white and Negro, were blacklisted…

Yet when the mills reopened in the winter of 1912, according to Foner’s History of the Labor Movement in the United States, the not-recognized B. of T.W. union “still existed as a force after the infamous war to exterminate it [and] by May 1912, the Brotherhood had a membership of between 20,000 to 25,000 workers, about half of whom were Negroes.”

As Bryan Burrough’s The Big Rich observed, “before oil the greatest Texas fortunes were made in ranching and East Texas lumber, where success depended on exploiting the labor of blacks, Latinos, and poor whites [and] in the years before World War I, John Henry Kirby all but owned East Texas.”

And according to the same book:

Kirby put together a group of Boston and New York investors and spent… 20 years buying timberlands… In 1901 he merged these interests and took control, creating the giant Kirby Lumber Company — at one point Kirby controlled more pine acreage than any other man in the world — and the Houston Oil Company… By the 1920s Kirby had emerged as [the] Texan’s leading businessman… He maintained suites at the Waldorf-Astoria in New York [and]… a mansion called Dixie Pines at Saranac Lake, New York.