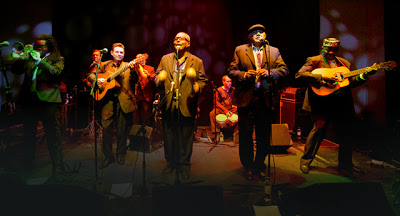 The Cuban band Sierra Maestra was formed at the University of Havana in 1976.
Economics, politics, and culture:
The Cuban experience

Culture can be revolutionary when it expresses pain, implies a better life, and extends the experiences of some to others…

[These remarks were prepared for a presentation before a musical performance at Purdue University by Sierra Maestra, the stirring band formed at the University of Havana in 1976. The band was named after the mountain range in Eastern Cuba that was the site of the formation of the Cuban revolutionary force that overthrew the U.S.-supported dictator in the 1950s. The nine-person band promotes and celebrates the classic Cuba Son music that has its roots in the diversity of class, race, ethnicity, and gender in Cuban history.]

People’s lives begin with the struggle for existence and are supplemented by the pursuit of joy and liberation. Culture, often reflecting the pain of daily existence and the vision of a better life, is intimately embedded in history, economics, and politics.

I am a truthful man,
From the land of the palm,
Before dying, I want to
Share these poems of my soul.

My poems are light green,
But they are also flaming red
My verses are like a wounded fawn.
Seeking refuge in the mountain.

(Pete Seeger reports learning these two additional Marti verses from a Cuban of African descent in 1983.)

Red, as in the desert,
Rose the sun on the horizon.
It shone on a dead slave
Hanging from a tree of the mountain.

A child saw it, trembled,
With passion for those that wept,
And swore that with his blood
He would wash away that crime.

Latin American social theorists and activists of the era of the Cuban revolutionary process (since the 1950s) defined the economic and political context of countries like Cuba — less passionately but rigorously — as a result of dependency. For example, Brazilian social scientist Theotonio Dos Santos wrote about what he called “the structure of dependence.”

Dependence is a situation in which a certain group of countries have their economy conditioned by the development and expansion of another economy, to which the former is subject.

Andre Gunter Frank, looking at the broad sweep of history beginning with the rise of capitalism out of feudalism referred to “the development of underdevelopment.” During the fifteenth century the sectors of the globe now referred to as the “Global North” and “Global South” were roughly equal in economic and military power. But as a result of the globalization of capitalism and militarism, some countries, primarily in Europe and North America, developed at the expense of most of the other countries of the world.

I have written a book chapter about “Themes in Cuban History” from the point of view of dominance and dependence (from Harry R. Targ, Cuba and the USA: A New World Order? International Publishers, 1992). The chapter addresses:

How is this history relevant to indigenous Cuban music and its connections with U.S. culture?

Culture, it seems to me, grows out of the experience of peoples. That experience is shaped by history, economics, and politics. Music is a common way of communicating and sharing experience, particularly of pain and joy.

The seeds of a common Cuban culture were planted in various fields — Africa, the sugar plantations of the island, and growing relations between Cubans and people of African descent in the region, including the United States.

Finally, culture can be revolutionary when it expresses pain, implies a better life, and extends the experiences of some to others — of similar class, racial, ethnic, and gender histories.

So as we listen to Sierra Maestra and reflect on the roots of its music, its contribution to jazz in the U.S., and the commonalities of Cuban Son and U.S jazz and blues, we might remember Marti’s expression from the poet’s point of view:

With the poor people of this earth,
I want to share my lot.
The little streams of the mountains
Please me more than the sea.

(All verses quoted here are from Pete Seeger, Where Have all the Flowers Gone?: A Singer’s Stories, Songs, Seeds, Robberies, A Sing Out Publication,1993).