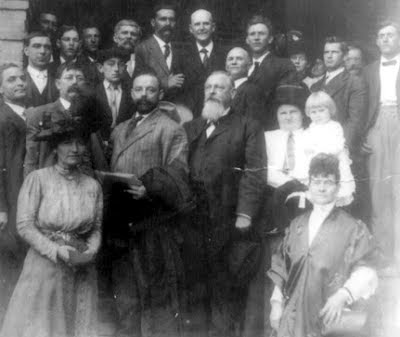 [This is the sixth section of Part 9 of Bob Feldman’s Rag Blog series on the hidden history of Texas.]

During the period between 1890 and 1920 there was much dissatisfaction among Texas workers and farmers with how capitalist society treated them. So it’s not surprising that political support for an anti-corporate electoral alternative third-party to the pro-corporate Democrats and Republicans — the Socialist Party — began to develop in Texas by the beginning of the 20th century. As F. Ray Marshall’s Labor in the South noted:

The Texas Socialist Party… was a member of the radical wing of the national party. E.O. Meitzen of Hallettsville, a member of the Grange, who helped organize the Farmers’ Alliance in Fayette County, and edited a German Populist paper (Der Anzeiger) during the 1890’s, was an active Socialist, and was secretary of the Renters Union, formed by Texas Socialists around 1909. Meitzen’s activities were continued by Thomas Hickey, a lecturer for the Social-Democratic Party in the south during the early 1900’s. Hickey published a magazine, The Rebel, from Hallettsville for many years… In 1912, Eugene V. Debs, the Socialist candidate for President of the United States [got] about 9 percent of the Texas vote…

According to the labordallas.org website, the circulation of The Rebel “went over 20,000” before it “was suppressed by the United States government as World War I began and never was reborn.” The same Texas labor history website also recalled that Texas Socialist Party leader Meitzen “was elected County Judge in LaVaca County and… gained 11.7 percent of the votes in the governor’s race” in Texas in 1914, “was shot by a sheriff he had accused of `losing’ important records concerning county monies” that same year, and “survived the shooting and other physical assaults” before he “died in Houston in 1934.”

Dissatisfied feminist white women in Texas also began to organize during the 1890 to 1920 historical period. As Randolph Campbell’s Gone To Texas observed, in Texas the white feminist movement “stirred slightly in 1903 with formation of the Texas Equal Suffrage Association” and “suffragettes by 1916 formed 80 local chapters and claimed 9,500 members for their statewide organization.”

So, not surprisingly, the Texas state legislature soon passed an act in 1918 which allowed white women in Texas to also vote in Texas primary elections; and after a May 1919 referendum in Texas, white women also were given the right to vote in U.S. presidential elections, when Texas became the ninth state to ratify the 19th amendment to the U.S. Constitution.

Ironically, “among those Austinites who supported the women’s voting rights movement was Adele Burleson, wife of Woodrow Wilson’s postmaster general [whose] husband urged the president to introduce racial segregation into the federal civil service,” according to David Humphrey’s Austin: An Illustrated History.

The same book also observed that former Austin Mayor A.P. Wooldridge “similarly sought to expand the rights of women while he limited those of blacks” and that “he advised a group of Austin blacks in 1919 [to] `keep out of politics’” and told them not to forget “that whites `will tolerate no idea of social equality.’”

After the Democratic Wilson Administration decided to involve the U.S. military in the European war in 1917 — over 197,000 people from Texas were either drafted into the military or volunteered during World War I. And according to Alwyn Barr’s Black Texans, “Negroes provided about 25 percent — 31,000 men — of the troops called up from Texas, though they formed only 16 percent of the state’s population” at that time.

Most draftees and volunteers from Texas served in the U.S. Army during World War I and “more than 5,000 men and 1 nurse” from Texas “died while in the service, most losing their lives in the great influenza epidemic of 1918,” according to Gone To Texas.

And the free speech rights and civil liberties of anti-war activists and dissidents in Texas who opposed U.S. military intervention in Europe during World War I were curtailed after the U.S. Congress passed its Declaration of War in 1917. According to the same book, “a special session of the… state legislature… passed espionage and sedition laws that made it a crime to criticize the U.S. government, its officials, the flag, or soldiers;” and the University of Texas regents “fired a well-known anti-war professor.”

African-American soldiers who were stationed in Texas after the U.S. military entered World War I also apparently challenged the racism of the Houston police department and white supremacy in Texas in a militant way in August 1917. As Gone To Texas recalled:

On Aug. 23, 1917, Houston police arrested a black soldier and then fired at and arrested a black military policeman who went to inquire about the first serviceman…The men still in camp… decided to march on the police station to secure the MP’s release… Gathering rifles, the soldiers… moved toward downtown Houston… killing 15 whites and wounding 12 others. Four of the soldiers also died…

But the U.S. Army subsequently found 110 of the African-American soldiers involved in this apparently anti-racist protest “guilty of mutiny and riot” and “19 were hanged and 63 received life sentences,” according to the same book.

The police had also “roughed up [a] black woman” on Aug. 23, 1917, according to Black Texans,  and the incident “stimulated a retaliatory raid by about 150” African-American troops. So, not surprisingly, after World War I ended, African-Americans in Texas “organized an Equal Rights Association to promote democratic government and equal justice” in Texas in 1919 — the same year that there were also anti-black race riots by some white Texans in Port Arthur and Longview (where homes of African-Americans were burned), according to the same book.

And according to Merline Pitre’s In Struggle Against Jim Crow: Lulu B. White and the NAACP, 1900-1957:

By 1919, according to Black Texans, 31 chapters of the NAACP existed in Texas “with 7,000 members — over 1,000 in both Dallas and San Antonio.” Yet in Austin — which at the time was still just the 10th-largest city in Texas — the following incident happened in August of 1919, according to Austin: An Illustrated History:

John Shilladay, the white executive secretary of the NAACP… journeyed to Austin in 1919 to assist with legal difficulties encountered by the NAACP’s Austin branch… At mid-morning just outside the Driskill Hotel, John Shilladay was assaulted by County Judge David Pickle, a county constable, and several other Austinites…

And that same month Democratic Texas Governor Hobby also warned NAACP national officers that “your organization can contribute more to the advancement of both races by keeping your representatives and their propaganda out of this state than in any other way.”

As late as 1910, Austin still “had virtually no public parks or playgrounds, only two paved streets, and few sidewalks, …refuse accumulated in alleys and was dumped on the banks of the Colorado, [and] the majority of residents still relied on backyard privies in the absence of sewer lines,” according to Austin: An Illustrated History.