Bob Feldman : The Alamo and the Republic of Texas 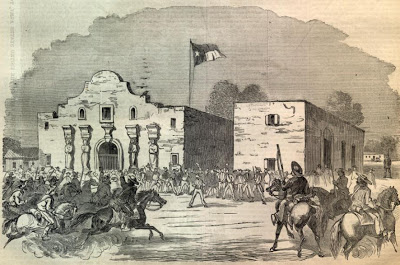 Battle of the Alamo. Art via Son of the South.
The hidden history of Texas

[This is the second segment of Part 3 of Bob Feldman’s new Rag Blog series on the hidden history of Texas.]

After Mexican President and General Santa Anna ordered his brother-in-law — Mexican General Martin Perfecto de Cos — to move more than 700 government troops into Texas in September 1835, the predominantly Anglo rebels opened fire on some of these Mexican Army troops in October 1835 in Gonzales, Texas.

In early 1836 Santa Anna gathered an army of 6,000 Mexican troops and ordered 3,000 of these troops to march toward San Antonio in late February 1836. In response, the Anglo rebel leaders ordered San Antonio evacuated — except for the armed men under William Travis’s command (later joined by additional volunteers) that included at least eight armed men with Spanish surnames and a few non-combatant civilian family members and African-American slaves.

The armed men and additional volunteers under Travis’s command — and the noncombatant civilians who were not evacuated — stayed behind in an abandoned Franciscan mission, The Alamo, that had been converted into a fort.

Some facts about what occurred at the Alamo remain in dispute, but the following appears to be accurate. For 10 days, Santa Anna’s troops besieged the Alamo and demanded that the armed men inside, most of whom were Anglo rebels, surrender unconditionally. But when Travis and his armed group refused to surrender, Mexican President Santa Anna ordered his troops to attack the Alamo on March 6, 1836.

As a result, 600 Mexican troops were killed and all of the estimated 189 armed combatants who remained in the Alamo at that time were killed by the Mexican troops. A few noncombatant civilians inside the Alamo survived the battle, as did the few men under Travis’s command who had left the Alamo as couriers between late February and March 6, 1836.

After the battle at the Alamo Texas rebel groups began to take up the battle cry, “Remember the Alamo!” in their subsequent armed clashes with Mexican federal government troops. Meanwhile, a convention of rebels at Washington-on-the-Brazos had, on March 2, 1836, declared Texas to be the independent “Republic of Texas,” with David G. Burnet, a land speculator with the Galveston Bay & Texas Land Company, as its first president.

Coincidentally, both the commander of the white Anglo rebel troops in the Alamo, William Travis, and one of the most famous defenders of the Alamo, Jim Bowie, were apparently either involved in the slave trade or at least owned slaves (as did former Tennessee Governor Sam Houston, one of the leaders of the Anglo settler revolt of 1835-1836 that led to the creation of the independent Republic of Texas).

As Alwyn Barr wrote in an essay, titled “Black Texans During the Civil War,” that appeared in a 2003 book called Invisible Texans: Women and Minorities in Texas edited by Donald Willett and Stephen Curley:

Anglo-American immigrants from the United States brought with them Black slaves, whose numbers had risen to about 5,000 when Texans revolted against Mexico in 1836… James Bowie and James Fannin had smuggled slaves into Texas, while Sam Houston and William B. Travis both owned bondsmen. Slaves represented at least 15 percent of the population in the new Republic of Texas.

So, not surprisingly, the March 1836 Constitution of the new independent Republic of Texas was a pro-slavery document that legalized slavery in Texas and reversed the legal ban on the importation of slaves into Texas which the Mexican Congress had enacted in 1830. As Gone To Texas observed:

Section 9 of the General Provisions… guaranteed that people held as slaves in Texas would remain in servitude and that future emigrants to the republic could bring slaves with them. Furthermore, no free black could live in Texas without the approval of [the Republic of Texas’s] congress, and any slave freed without the approval of congress had to leave the republic. Most of the leaders of the Texas Revolution were southerners and the new republic would protect their “Peculiar Institution”…

After the fall of the Alamo, the armed conflict between the separatist Texas rebels and the Mexican government’s troops only lasted another six weeks. In late March 1836, a unit of 365 Texas rebels (under James Fannin’s command) was surrounded by a much larger number of Mexican Army cavalry troops (under Mexican General Jose de Urrea) near Goliad, Texas. Then, in accordance with Mexico’s recently-passed “piracy” law, Santa Anna ordered all 365 Texas rebels executed on March 27, 1836, following the surrender of Fannin and his unit to General Urrea’s cavalry.

While he was held as a prisoner by Texas rebel troops, Santa Anna was forced to sign the Treaty of Velasco on May 14, 1836, in which he agreed to withdraw all Mexican troops to the other side of the Rio Grande. In addition, the Rio Grande was made the independent Republic of Texas’s new southern boundary — although when it was part of the Mexican state of Coahuila y Texas, the southern boundary of Texas was actually considered further north on the Nueces River.

Not surprisingly, the Treaty of Velasco that Santa Anna was forced to sign while imprisoned was subsequently repudiated by the Mexican government and by Santa Anna (after he was finally released nine months later and sent back to Veracruz, Mexico on a U.S. warship by U.S. President Andrew Jackson). The Mexican government refused to recognize the independence of Texas and the separatist Republic of Texas or to agree that Texas’s land was no longer a part of Mexico’s territory until 1848.

Following the signing of the Treaty of Velasco in May 1836 and the withdrawal of Mexican troops, the Anglo settler-colonist leaders of the 1835-36 separatist “Texas Revolution” almost immediately tried to persuade the U.S. government to annex their newly independent “Republic of Texas.” So, not surprisingly, Northern opponents of slavery, like Benjamin Lundy and U.S. Congressional Representative John Quincy Adams, insisted that the Texas “revolution had resulted from a conspiracy to add more slave territory to the Union,” according to Gone To Texas.

2 Responses to Bob Feldman : The Alamo and the Republic of Texas