BOOKS / Dick J. Reavis on ‘The Shallows: What the Internet is Doing to Our Brains’ 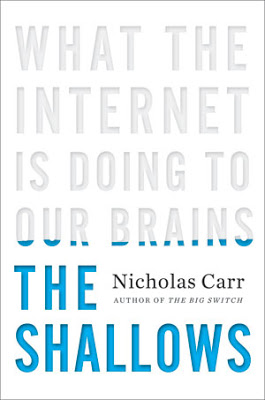 A worrisome message from Nicholas Carr:
What The Shallows means for the left

Literature students in American universities no longer see any point in reading whole novels. Instead, they want to scrutinize a work’s most pregnant passages, scanning or overlooking the balance of the texts. This is the most startling notice I encountered among dozens of disconcerting reports in The Shallows, a June book subtitled What The Internet Is Doing To Our Brains.

Much has been made in the mainstream press about the warnings advanced by the book’s author, Nicholas Carr, a journalist best known for a 2009 tome about Google. Most reviewers of his present volume have focused on his predictions of doom for libraries and the printed word, though as a careful author, he doesn’t quite predict anything so dire, perhaps for a reason any long-form journalist knows well: publications that don’t preach hope don’t sell as well as those that do.

Carr draws his arguments from reports of recent, but still pioneering, studies of brain physiology, and from psychological experiments. His book got a boost in late May when researcher Sara Konrath of the University of Michigan presented a paper before a Boston meeting of the Association for Psychological Science, claiming that empathy levels among college student had dropped 40 percentage points over the last 25 years. Konrath and other researchers blamed the decline on webification and computerized social networks. It was as if she had gone to Boston to confirm the predictions Carr had made.

His text, without help from Konrath, carries a worrisome message, especially for oldsters with the ideological biases of those who click to this blog. The message is that the death of ideology and activism may finally be upon us.

Carr’s chief point is that computerized search engines, Tweets and the like, as books originally did, have reduced the value of memory and cogitation, while boosting the lures of immediacy and statistical citation. Today we can get decision-making data faster than ever. We need not, or we come to believe they that we need not, meditate, ponder, or even sleep upon what we’ve absorbed — let alone bring first-hand experience to our tasks.

The prevalence of this attitude, whose venerable genealogy Carr traces, came home to me a couple of months ago in a conversation with a student editorialist who, as a budgetary measure, seriously advocated that university bureaucrats be sent packing and students be hired, at lower salaries, to take their places. Though as a professor I am naturally no fan of university administrators, the proposal struck me as foolish.

“But if you do that,” I told the student, “we will lose institutional memory.”

The error of mistaking Google links for judgment, I might add, is not new to today’s college generation. A cohort of Mexico correspondents saw the same sort of unseasoned judgment in the late ‘80’s and early 90’s, while the NAFTA agreement was being debated. From what reporters in Mexico could see, economists and pundits were tapping macro statistics about the Mexican economy and concluding that it was on the cusp of joining the developed world. We looked around, at the problems of daily life in Mexico, and said to each other — though rarely in print — “Huh? Somebody who doesn’t know this country has got it all wrong!”

The subsequent development of the web has put a similar capacity for error at the fingertips of every literate American, as is evident in today’s proliferation of well-sourced bloggers who are bereft of personal experience. People in home offices in Iowa opine about the measures Pakistanis should take to quiet the Taliban — or about the need to “secure our border” with Mexico. In the past, such opportunities for error were reserved to the Pentagon, the National Security Council, and think tanks with outsized endowments. Every fool with a web browser can now regard himself as a legislator and editorialize about what he or she “supports” or “opposes” — as if someone with clout were heeding.

Carr’s warnings are practically an obituary for those of us who, largely as a fruit of the turmoil of the ‘60’s, developed dissident world views. Pacifism, socialism, Pan-Africanism: ideologies like these cannot be formed without the careful study of whole works of thought, because they draw a systemic picture of life that differs from prevailing “pragmatism,” i.e., the philosophy of adjustment to “democratic” capitalism.

The tools of the declining Left — newspapers, heavy tomes, study sessions — have little appeal today. Bits of information dropped into the world view of “pragmatic” common sense spur political action, in the rare instances when any is in the cards. When one Arizona rancher is murdered, presumably by Mexican immigrants, national outrage takes root within days: nobody feels a need to live on the border or to study the history of Mexican-American affairs.

Not all of Carr’s news is disheartening when read from the Left, however. He says that the emerging mentality is collective and that it quickly forms a consensus. He sees this as endangering an individualism and a literary heritage that he treasures, but he contradicts himself by reporting a finding, common to dozens of observers, that what the web does is heighten individualism through what scholars call the “fragmentation” of personal tastes and interests. Andy Warhol may have said that in the future everyone will be famous for fifteen minutes, but what fragmentation means is that in many senses, everyone will be an eccentric for life.

As an old socialist, I of course have faith that people will regain empathy and that their movements will someday reinvigorate systemic critiques and visions — or concoct new ones — and will improve the world in qualitative ways: history can’t be over yet! But in the United States, no movement has done as much in the past two generations, and Carr and Kornath give little reason for hope. The upshot of The Shallows is that whatever happens in our nation, risings like the ‘60’s are at least a couple of generations away.

[Dick J. Reavis is a professor in the English department at North Carolina State University. He may be reached at dickjreavis@yahoo.com.]

4 Responses to BOOKS / Dick J. Reavis on ‘The Shallows: What the Internet is Doing to Our Brains’