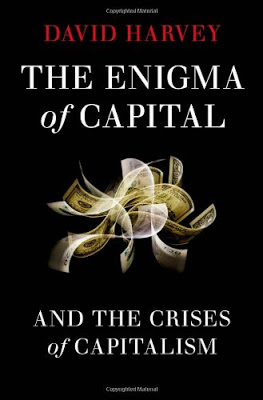 What now?
Economic and political crisis in 2010

So where shall we start our revolutionary anti-capitalist movement? Mental conceptions? The relation to nature? Daily life and reproductive practices? Social relations? Technologies and organizational forms? Labour processes? The capture of institutions and their revolutionary transformation?

…the implication of the co-evolutionary theory here proposed is that we can start anywhere and everywhere as long as we do not stay where we start from!… it becomes imperative to envision alliances between a whole range of social forces configured around the different spheres.

— David Harvey, The Enigma of Capital and the Crises of Capitalism, 138

Class struggle in an age of economic crisis

In his recent book, The Enigma of Capital and the Crises of Capitalism, David Harvey, Marxist geographer, summarized the economic crises of the 1970s and beyond including growing global monopolistic competition, declining profits in non-financial corporations, and the uneven spread of global capitalism with new fronts in East Asia. As analyzed by Harvey these economic crises stimulated the following responses:

Economic impacts of the crisis of capitalism

Harvey’s narrative suggests that since the 1970s we have seen the transformation of the U.S. capitalist system from one based on the production of commodities for sale to one based on the provisioning of services for lower wages. Even the service economy is being superseded by an economy driven by debt and speculation, from a “real” to a “virtual” economy. Significant changes in the economic life of the United States over the last 40 years include:

Returning to the current political crisis

The long-term economic crises discussed above refer to the rapid transformations of the capitalist system: concentrations of capital creating new winners and losers, class struggle, declining rates of profit, and global economic and political competition.

Political crises refer to the reallocations of power in the struggle over the shape of society. Central to the capitalist era is the struggle for power between capital and labor. Often, access to and relative control of the state is central to understanding the constellation of forces existent in any given time.

The discussion above suggests ways in which economic structures and processes have affected the distribution of power in the United States. The analysis gives some sense of the prospects and possibilities of strategies for progressive political change. Understanding the character of political crises requires both structural analyses, covering decades, and contextual analyses about strategies, tactics, personalities, and political activities, whether electoral or not.

Activists and pundits have been combining the two in pre-election debate and post-election assessments. While the two kinds of analyses are inter-connected, they have their own theoretical and practical assumptions which may be very different.

For example, as to structural analyses the era of a permanent war economy, financialization, deindustrialization, and neoliberal globalization have affected politics in the following ways:

Contextual analyses add to our understanding of the recent 2010 election:

These “errors” occurred in the context of a 30 year economic crisis that engendered a qualitative shift in wealth and power. Millions and millions of dollars were spent by think tanks, party leaders, and most important, the media to shape the consciousness of the American people. Despite the thousands of blogs, websites, and electronic media, the ideas of the ruling class about capitalism, about the threats of people of color, and about the government were transmitted 24/7 from Fox to CNN to The New York Times.

Never before have working people had greater access to greater numbers of media with so little diversity of ideas.

In a clear-headed way, progressives and socialists need to revisit the political and economic history of our times, assessing the distribution of resources and forces for and against social change. Most Marxist narratives of the history of the last 40 or 50 years tell a common story: a story of shifting capital from manufacturing to finance, income and wealth from the bottom to the top, and the marginalizing economically and politically of all whose power is limited in capitalist societies — workers, people of color, women, and immigrants.

When they have risen up angry, political institutions have been forced to respond by ameliorating the worst of people’s pain and suffering. Along the way struggle has taken a variety of forms — electoral, mass mobilizations, local/national/global — and has addressed various issues.

Harvey disaggregates the history of capitalism during its recent phases and articulates a “co-revolutionary theory” for progressives and socialists to respond to the crises of our time. The “co-revolutionary theory” recognizes that the history of capitalism has involved changes in technology, in relations between humans and nature, and in how people relate to each other in institutions, in the work place, and on the street. Also, changes have occurred in cognitive and emotional ways in which people understand the world in which they live. Finally, people’s relationships to politics have changed.

Each of these constitutes a different location for struggle: over control of the workplace, against environmental destruction, against racism or attacks on immigrants for example. Activism might take an electoral form, street heat, or in social relations such as building communities of solidarity.

As Harvey suggests: “An anti-capitalist political movement can start anywhere… The trick is to keep the political movement moving from one moment to another in mutually reinforcing ways.” He claims that this is how capitalism arose out of feudalism and this is how 21st century socialism can emerge out of capitalism. I would argue that what many have called “building a progressive majority” is part of the same trajectory Harvey is suggesting.

Since most progressive and socialist organizations today have limited resources, they need to identify those cites they can most influence, always recognizing the dialectical interconnections among each and that the relative salience and connections between them are ever changing.

Today organizations such as the Committees of Correspondence for Democracy and Socialism (CCDS) should concentrate on labor and jobs, the environment, and militarism and global interventionism. CCDS is particularly equipped to work with others on these projects and to use electronic and communications skills to transform what Harvey calls “mental conceptions of the world, embracing knowledges and cultural understandings and beliefs.”

This essay of necessity began with a grounding in the long history of capitalism and political struggle and its impacts on economic and political life, and ended with “what now?” It is not a simple road map. Rather it is a checklist of what is relevant to understanding structures and processes and contexts to advance discussion and debate. Paraphrasing Marx, people make history but not precisely in ways of their choosing.