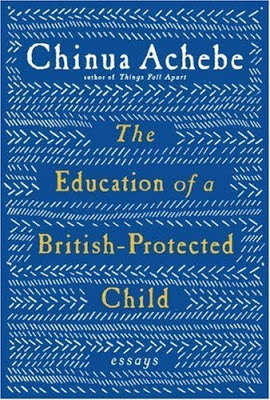 Chinua Achebe’s sharp and inspiring essays:
The Education of a British-Protected Child

Here’s a contemporary writer of compelling fiction and non-fiction alike with whom I can really identify, and feel a sense of genuine comradeship. In part, that’s because he talks about the “Third World,” “imperialism,” and “neocolonialism” — words that don’t seem to be fashionable in academic circles these days.

The writer’s name is Chinua Achebe, and while he was born in Nigeria, he has spent much of his life in the United States, teaching, writing, and observing American ways and American literature. His latest book — The Education of a British-Protected Child — is a collection of 16 sharp and inspiring essays about politics and language, oppression and the human spirit.

The essays are all written clearly and poetically. They express the perspective of a man of true wisdom, and not just learning or education, and, like the title itself, the essays embody a playful sense of irony. When he was a child the British didn’t protect him at all, he explains, and they didn’t bring democracy to Africa, either, he says. “British colonial administration was not any form of democracy, but a fairly naked dictatorship,” he says.

The author of Things Fall Apart — one of the most widely read and best-known 20th-century African novels — Achebe writes with a sense of compassion and partisanship too. He knows clearly which side he’s on — the side of the oppressed against the oppressors — but he also values what he calls “the middle ground — that place where the human spirit resists an abridgement of its humanity.”

He goes on to say that this quality is “to be found primarily in the camp of the colonized, but now and again in the ranks of the colonizer too.” So, he acknowledges his intellectual debt to British scholars, such as Basil Davidson, the author of The African Slave Trade.

Achebe also gives a nod in the direction of my book, The Mythology of Imperialism, first published in 1971 and reprinted in 2009 by Monthly Review Press. “Mr. Raskin’s title,” Achebe writes, “defines the cultural source out of which Joseph Conrad derived his words and ideas.” Conrad’s work, he adds, “is grounded quite firmly in that mythology of imperialism which has so effectively conditioned contemporary civilization and its modes of education.”

It’s nice to be acknowledged by Achebe, if I do say so myself. What’s more, Achebe’s book provides useful tools for understanding the role of imperialism today, and the ways that individuals buy into it no matter what their skin color.

In an essay entitled “African Literature as Restoration of Celebration,” Achebe describes his own education in Nigeria in a school modeled on the British public school. As a boy, he read books about Africa and Africans by white authors such as John Buchan and Rider Haggard. Achebe came to identity with the white characters not the Africans. “I went through my first level of schooling thinking I was of the party of the white man in his hair-raising adventures and narrow escapes,” he says.

In the 1960s, of course, African Americans who thought they were of the party of the white man were sometimes called “Oreos.” I remembered that word and the image it conjures while reading Achebe’s book, and I thought also of President Obama.

Could it be, I wondered, that like the youthful Achebe, Obama thinks he’s of the party of the white man? And could it be that like Achebe he’ll have an awakening and a kind of conversion? Perhaps Mr. Achebe ought to send Mr. Obama a copy of this book, along with his brilliant first novel Things Fall Apart, which has helped to change the ways that readers around the world see Africa.

Perhaps our president will come to see, along with Achebe, that “Our humanity is contingent on the humanity of our fellows. No person or group can be human alone. We rise above the animal together, or not at all.”

Find The Education of a British-Protected Child: Essays, by Chinua Achebe, on Amazon.com.