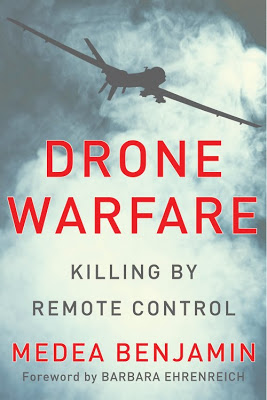 “The drones were terrifying… the buzz of a distant propeller was a constant reminder of imminent death.” — Journalist David Rohde

Medea Benjamin — the author of the new book, Drone Warfare, and the cofounder of CODEPINK and Global Exchange — isn’t buying any of the buzz about the UAV’s. She thinks they’re illegal and immoral and ought to be banned except for peaceful purposes — like fighting forest fires.

Drone Warfare is a useful guidebook for organizers and activists, whether they want to educate themselves and others, or join the global movement that is calling for an immediate end to killing by remote control, and an end to the unending reign of terror that has been imposed from above on innocent civilians — men, women and children– ever since 9/11. Imperfect drones have also killed Americans soldiers in Asia.

As in all previous wars, the drone war has led to “doublethink,” as George Orwell called it. Senior White House counterterrorism adviser, John Brennan, noted in April 2012 that “Unfortunately in war, there are casualties, including among the civilian population,” and that “sometimes you have to take life to saves lives.”

About a hundred years ago, General William Tecumseh Sherman said “war is hell” and led Union troops on a rampage through Georgia, burning, looting, and killing. He was no less deadly on the ground that the drones are in the air, but he seems to have been more honest than the White House and its advisers are today.

Benjamin has talked to the pro-drone technocrats and to the representatives from anti-drone organizations such as the American Civil Liberties Union, as well as to lawyers and their clients who have been arrested and gone on trial for demonstrating against UAVs.

She’s read the articles and the editorials about them, too, and she writes clearly and concisely about real people caught up in the machinations of war and with vivid quotations from them, some as recently as February 2012, which means that this book is as up-to-date on the subject as a book can be.

Some of the most powerful comments are by Americans who have experienced drone warfare while in Afghanistan. Perhaps the most electrifying is by David Rohde, a journalist who shared a Pulitzer Prize for his coverage of the wars in Afghanistan and Pakistan, and who was kidnapped by the Taliban. Like everyone else on the ground, he lived under the threat of death by remote control.

After his escape and return to the United States, he wrote an article entitled “The Drone War” in which he said that, “The drones were terrifying.” He added that “the buzz of a distant propeller was a constant reminder of imminent death,” and that “drones fire missiles that travel faster than the speed of sound.” The victims, he explained, never even hear the missiles that kill them.

Indeed, the main point of the drones seems to be to terrify human beings en masse in whole regions and across nations, whether Afghanistan, Pakistan, or Yemen. Granted, drones have killed thousands of people, including American citizens, such as Anwar al-Awlaki in Yemen in 2011. The body count is not insignificant and at times the killing of a single individual may be critical to a military campaign.

But the psychological impact is the hideous big bonus of the drones, much as the threat of nuclear annihilation was a big hideous bonus of nuclear warfare. For the moment, the use of the drone as a psychological weapon by the United States government seems to have tipped the balance of power in favor of American military forces and American spy agencies, though debates about the efficacy of the drones can be followed on the Internet and TV.

The drone is much in demand and highly praised, with thousands of them named the Predator and the Reaper coming off assembly lines and with no end in sight. Indeed, U.S. taxpayers are shelling out more than $3 billion a year for them, and even if they can’t see what they’re doing, they’re hurting American citizens financially.

Benjamin breaks the “sordid” drone saga down into its component parts, looking at its economic, legal, moral, and political aspects. She also puts all the pieces together and shows how drone warfare has led to spirited opposition from citizens in Asia, in Europe, and in the United States. She even works up sympathy for the drone operators who are, after all, no more than lowly workers in the immense, hierarchal hive of military activity.

“For up to twelve hours a day, they stare at 10 overhead television screens, monitoring a constant stream of images being relayed to them from the battlefield while communicating on headsets with drone pilots at other bases and instant messaging with commanders on the ground,” Benjamin writes.

Reading her description of a day in the life of a drone operator makes it obvious that the highly touted drones are greatly imperfect and hardly efficient or inexpensive killing machines. Right now, though, they’re making millions for the super-duper, high-tech weapons industry.

Outlawing drones seems to be not only a worthwhile goal but also achievable. It wasn’t that long ago that governments tested atom bombs and that airplanes loaded with cancer-causing DDT sprayed millions of acres of American farmlands, forests, and suburban backyards, too. The world woke up to the deadly reality of atomic bomb testing and DDT-spraying and put an end to them.

Benjamin offers useful suggestions for readers who want to put drones out of business. At the back of the book, she provides a list of organizations that can help activists and organizers from New York to Nevada. If you want to get started you could go to “Robot Wars” which can be found here.

[Jonah Raskin is a regular contributor to The Rag Blog and the author of Marijuanaland: Dispatches from an American War, For the Hell of It: The Life and Times of Abbie Hoffman, and The Radical Jack London: Writings on War and Revolution. Read more articles by Jonah Raskin on The Rag Blog.]