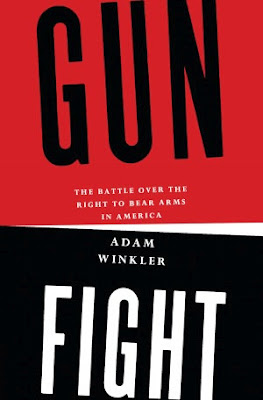 Freethought groups generally don’t take positions on gun control and the right to bear arms. What freethinkers try to do is understand the evidence about various propositions and draw rational conclusions about those propositions based on the evidence.

For many years, debate has raged between those who oppose gun regulation and those who believe that the government has a role in regulating guns. Much of that debate has been based on myth, legend, erroneous history, and beliefs supported by little, if any, evidence.

Now, thanks to the work of Adam Winkler, a professor of constitutional law at UCLA, we have a book based on careful research that can help us separate fact from fiction when we discuss the right to bear arms and the regulation of that right. Gunfight: The Battle over the Right to Bear Arms in America makes a seminal contribution to the discussion. It will make the most vocal advocates in this debate, no matter their views, either enlightened or angry or both.

Winkler has found that some of our most persistent ideas, especially about the American Wild West, are false. Gunfights were not everyday occurrences, for instance. They happened now and again, but were not the norm, although almost everyone in the West during its developing years owned and carried guns, both rifles and hand guns. They needed to do so because there was danger all around — from outlaws, desperate men, Indians, and wild animals.

But most western towns required that guns be checked when the owner came into town. Dodge City, Kansas, for example, prohibited the carrying of firearms in the 1870s. Most western towns had no murders during those days. The reason for these gun control regulations, according to their advocates (the predecessors to our modern-day Chambers of Commerce), was to create a civilized town that would grow and prosper.

Forty-three states protect the right of individuals to bear arms in their state constitutions, most either from the days of the founding of this country or from the early 1800s. Yet, we also have a gun regulation history that runs side-by-side with the established right to bear arms.

While the founders believed strongly in the private ownership of firearms, they did not believe in a standing army. Instead they supported militias, comprising ordinary citizens, who needed to possess firearms to fulfill their responsibilities. The Second Amendment protects the rights of states to have militias, and thereby the right of the people to possess firearms so they can serve in those militias.

The founders also supported gun control, barring many groups from owning firearms, including slaves, free blacks, and white loyalists — those who did not support the revolution, about 40% of the population of the time. Gun owners were required to appear at mandatory musters of the militias, at which time they would present their guns for inspection, records of which were kept on public rolls. These laws were responses to the needs of the republic as they were perceived at the time.

In 1792, the founders passed an individual mandate that required every free white male between the ages of 18 and 45 to purchase a military style firearm and ammunition. Bird-hunting guns were insufficient to satisfy the requirements of the Uniform Militias Act.

The most prominent opponent of gun control today is the National Rifle Association (NRA). But in the 1920s and 1930s, the NRA led the gun control movement, drafting and promoting laws that restricted carrying guns in public, mainly aimed at restricting the gangsters of that day. Some of those laws still exist, but are opposed by today’s NRA. Winkler traced the militant anti-gun control stance of today’s NRA to an unusual series of events.

In 1966, the Black Panther Party for Self-Defense was created. In 1967, a group of 30 Black Panthers marched into the state capitol of California with loaded guns, rifles, and shotguns displayed openly, and walked into the legislative session then in progress to protest a gun control bill under consideration.

These young black men had been policing the police with their own guns at the ready, following Oakland policemen around to make sure they did not do anything harmful to other black men and giving suspects advice on what they should do. They carried guns openly, holding them pointed toward the ground or toward the sky, both accepted methods of displaying firearms in public.

The actions of the Black Panthers led the California State Legislature to consider and pass laws restricting openly carrying guns in public. Then-Governor Ronald Reagan said on the day of the visit to the capitol by the Black Panthers, “There is no reason why on the street today a citizen should be carrying loaded weapons.”

Gun control and race had been linked before in American history. A key purpose of the Ku Klux Klan, for instance, was gun control. After the Civil War, the Union Army allowed both black and white soldiers to take their guns with them as part of the pay that was owed to them. Some southern blacks bought some of those guns. Black ownership of guns in the south after the Civil War led to laws prohibiting such ownership among blacks. The KKK forcefully disarmed many blacks, intentionally killing some in the process.

In 1967, Detroit and Newark, as well as other urban areas, experienced riots in which guns were used against policemen and National Guardsmen. So-called Saturday Night Specials, cheap handguns, were available to thugs, robbers, and thieves. Many observers believed the easy availability of firearms caused much of the lawlessness, criminal activity, and violence in America’s urban areas.

With so many guns available, many feared that revolution was about to break out. Congress passed the first major gun control law since the 1930s — the Gun Control Act of 1968 — which banned the importation of cheap handguns, expanded licensing for gun dealers, and barred felons from possessing guns. But really the Act was intended more to control blacks than to control guns.

The California law and the Gun Control Act started the modern backlash led by the NRA, whose mostly white, rural members became afraid that while the two laws might have been aimed at blacks, the government would come after their guns next.

The opinion, written by Justice Scalia, recognized, however, that gun control laws could be legitimately passed and enforced. The city’s firearm registration and assault weapon ban were allowed to stand, and its laws still prohibit carrying guns, both openly and concealed.

While Scalia based his opinion on his concept of originalism, his reasoning made clear that it was really based on looking at current conditions and determining that such laws could serve legitimate governmental interests. He suggested that laws against machine guns were OK because machine guns are not in wide use, a modern circumstance created by the gun control laws from the gangster years of the 1930s.

Winkler’s research demonstrates clearly that Americans have always had the right to bear arms and the government has always had the right to regulate guns. The biggest problem he found is that much gun control is ineffective, in that only about .5% of guns in America are used for illegal activities. This is why total gun bans, such as the one struck down in the nation’s capitol, don’t have a rational foundation.

Whether you are for or against gun control, Winkler’s book should at least help clarify the issues, so that arguments are not wasted on unfounded ideas and beliefs. We should be debating what gun control regulations will have a positive societal benefit and which are just regulation for regulation’s sake, or are put in place for unsubstantiated reasons.

For example, Winkler has suggested background checks for all gun purchasers, not just for those guns bought from licensed dealers. Such a step would make it harder for criminals to get guns, and would make it clearer how law-abiding citizens with personal guns they want to sell can follow the law.

Recent news suggests that another regulation or law that would be beneficial to society is to prohibit multiple sales of rifles to the same person during a set period of time. The practice of buying 10 or 20 or more semi-automatic rifles at one time has been used in Arizona to smuggle vast quantities of such rifles into Mexico, contributing to the extreme wave of violence that has been going on there for the past year or so, with its blowback on Americans.

Further, a requirement to register all guns would be of great help to law enforcement when they are investigating gun-related crime. If a gun is stolen, law enforcement will have good records about it. Such registration could be no more intrusive than the census.

In either case, massive insurrection would ensue, so this is a far-fetched, if not absurd position.

I hope we continue to debate gun control and finally arrive at sensible, necessary regulations that will make us all safer so that we can enjoy civilized communities that will grow and prosper. This desire has been handed down to us from our forebears. We should be grateful for their wisdom.