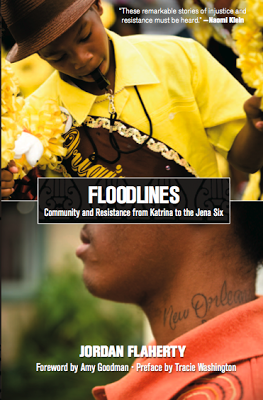 Parts of the story are familiar. In late August, 2005, Hurricane Katrina hit the Gulf Coast. Floodwaters broke the levees in New Orleans and the city was devastated — first by floods, then by a shamefully underwhelming response on the part of the federal, state, and local governments.

While tourists were picked up and shipped out, poor people of color and prisoners were left with no food, shelter, or support in the aftermath. Some sat in Orleans Parish Prison, still in lockdown, as the waters rose inside their cells. In the years to follow, the situation worsened for many and improved only for those who could afford to pay their own way through the so-called “recovery.”

Parts of the story are less familiar. In the aftermath of Hurricane Katrina, groups ranging from young public school students to Palestinian and Vietnamese communities organized for the right to play a part in rebuilding the city. New projects arose, providing services ranging from women’s healthcare to expunging criminal records, fighting for public housing, defending New Orleans’ historic black culture, and creating alternatives to the brutal and racist criminal legal system in New Orleans Parish.

Although the long-term demands of these organizations were too often quashed, the stories of those who fought back after Katrina are as precious as they are little-known.

Luckily for us, writer and activist Jordan Flaherty was there. And Flaherty was not in New Orleans to observe or cover a story — he was there, in 2005 and in the years that followed, because he lives there. He was one of the people who did not evacuate during the storm, and literally watched from a rooftop as New Orleanians were abandoned by the government and smeared by the media as “looters” and criminals.

He was one of the people to seek out and record the stories of those trapped in prisons with no charges and no trial for weeks, months, and even years after Katrina. He was one of the rare people to expose the continuing torture of political prisoners at Angola Penitentiary, the targeting of transgender women as sex criminals, and the outrageously lousy defense lawyers who did little to help poor New Orleanians after the storm, sometimes sleeping through their own court appearances.

He was also the first journalist to report nationally on the story of the group of young men from rural Louisiana who came to be known as the Jena 6. These young African-American men were arrested for attempted murder after a fight erupted at school in response to white students hanging nooses from a tree in the schoolyard; they have since had their charges dropped or reduced, largely due to a surge of national attention.

Floodlines begins with a firsthand account of Flaherty’s experience directly after Hurricane Katrina, and proceeds to weave together personal accounts, cultural history, detailed records of activist work, and reflective analysis. The chapters cover education, immigration, prisoner organizing, housing rights, cultural activism, and the workings behind the displacement and disillusionment of so many New Orleanians.

As he shares these stories, he is clear about his own privilege as both a white person and as a journalist. While Flaherty is not afraid to editorialize and criticize, a tone of both humility and commitment permeates Floodlines.

In his chapter on prisons, Flaherty is characteristically straightforward about his view: “Prison makes us all less free — by breaking up families and communities, by dehumanizing the imprisoned both during and after their sentences, by perpetuating a cycle of poverty, and by making all citizens complicit in the incarceration of their fellow human beings.”

Louisiana has the highest incarceration rate in the United States, and the threat of incarceration is a constant part of life for many black New Orleanians. Flaherty paints a vivid picture of the “cradle-to-prison pipeline,” the process by which impoverished young people of color are funneled towards a life in prison virtually from the time of birth. As organizer Robert Goodman puts it, “Every time a black child is born in Louisiana, there’s already a bed waiting for him at Angola State Prison.”

Goodman is part of a new organization called Safe Streets/Strong Communities. Founded in 2006, the group interviewed over a hundred people who had been locked up prior to Katrina. Flaherty says that when he heard some of their stories, he “felt a chill.”

The stories included children abandoned in lock-down during and after the storm; the warehousing of massive groups of people in open yards with no food, shelter, or space to defecate; and a public defender’s office so inept that even a Criminal District Court Judge called it “unbelievable, unconstitutional, totally lacking the basic professional standards of legal representation, and a mockery of what a criminal justice system should be in a western civilized nation.”

Katrina opened up space for increased policing and militarization even as the city slashed funds for indigent defense and social services.

While exposing injustice is a part of Flaherty’s thrust, Floodlines does not come across as a shocking exposé, the kind of thing that flashes across television screens for a day or two and then disappears, leaving a sense of powerlessness in its trail. Instead, the book reveals how the events we see unfolding in the news are part of a complex history of black cultures of resistance dating all the way back to the beginnings of slavery in the south.

Taken all together, Floodlines is a hopeful, revealing account of five years of hardship and displacement. Outsiders and insiders alike will benefit from Flaherty’s uniquely personal and unabashedly political account of some of the most important untold stories of our time.

[Lewis Wallace is a freelance writer and a regular contributor to Left Turn and make/shift magazines. He also writes about music for an educational website called Shmoop.com and works as an anti-prison activist. This review was also published by Prison Legal News.] 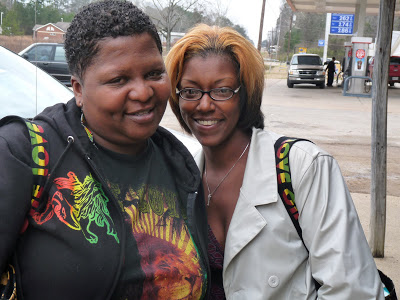 Caseptla Bailey (left) and Catrina Wallace were active in the campaign to support the Jena 6. Their door was broken down by police while they slept. Photo by Jordan Flaherty / The Rag Blog.
Jena Six activist convicted,
faces decades in prison

Civil rights activist Catrina Wallace, who received national acclaim for her central role in organizing protests around the Jena Six case, was convicted March 31 of three counts of distribution of a controlled substance. She was taken from the courtroom straight to jail after the verdict was read, and given a $1 million bail. Her sentencing is expected to come next month.

Wallace, who is 30, became an activist after her teenage brother, Robert Bailey, was arrested and charged with attempted murder after a fight in Jena High School. Bailey and five others later became known as the Jena Six, and their cause became a civil rights rallying cry that was called the first struggle of a 21st century Civil Rights Movement.

Their case eventually brought 50,000 people on a march through the town of Jena, and as a result of the public pressure the young men were eventually freed. The six are all now in college or — in the case of the youngest — on their way. Wallace and her mother, Caseptla Bailey, stayed in Jena and founded Organizing in the Trenches, a community organization dedicated to working with youth.

Catrina Wallace was represented by Krystal Todd of the Lasalle Parish Public Defenders Office. The case was prosecuted by Lasalle Parish District Attorney Reed Walters, who also prosecuted the Jena Six case, and famously told a room full of students, “I can make your lives disappear with a stroke of my pen.”

The case was presided over by 28th District Judge J. Christopher Peters, a former Assistant District Attorney under Reed Walters. Peters is the son of Judge Jimmie C. Peters, who held the same seat until 1994. The 12-person jury had one Black member.

Wallace was arrested as part of “Operation Third Option,” which saw more than 150 officers, including a SWAT team and helicopters, storm into Jena’s Black community on July 9, 2009. Although no drugs were seized, a dozen people were arrested, based on testimony and video evidence provided by a police informant, 23-year-old convicted drug dealer Evan Brown.

Community members responded to the verdict with sadness and outrage. “We don’t have any help here,” said Marcus Jones, the father of Mychal Bell, another of the Jena Six youths. “Catrina tried to keep in high spirits leading up to the trial, but when a bomb like this is dropped on you, what can you do?”

Jones and others are calling for the U.S. Department of Justice to investigate.

Wallace, a single mother, has three small children, aged 3, 5, and 10. The youngest child has frequent seizures.

[Jordan Flaherty is a journalist and staffer with the Louisiana Justice Institute. His award-winning reporting from the Gulf Coast has been featured in a range of outlets including The New York Times and Mother Jones. His new book is FLOODLINES: Community and Resistance from Katrina to the Jena Six. He can be reached at neworleans@leftturn.org, and more information about Floodlines can be found at floodlines.org.