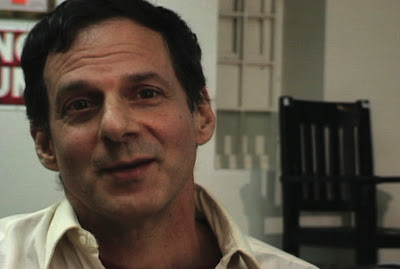 Author and former member of the Weather Underground, David Gilbert, is a prisoner at the Auburn Correctional Facility, Auburn, N.Y. Photo from Indybay.com.
David Gilbert’s Love and Struggle:
Days of rage, rebellion, and revolution

Perhaps it is the times: the election of a Black president. The renewal of the right wing, or even something so prosaic as the press of age, but there has been a resurgence of Weather Underground material of late.

David Gilbert, a published author (No Surrender), a long time prison AIDS prevention activist, and a founding member of the Weather Underground has joined that number.

Without commenting on the nature and/or motivations of many of the other works, Gilbert’s reason for writing this volume, which he has strongly resisted in the past, is clear.

First, he pens it because his adult son, Chesa, requested he do so, announcing his previous work “almost all analytical.” Like many men and women of this new Twitter-age, what seems most important is the personal, rather than the political.

Secondly, hundreds of activists in various movements have written to him, and while they seemed to be looking back at Weather as an almost mythical organization, Gilbert felt the need to demythologize both the movement and the era, and speak openly of the mistakes made as well.

This is not Glory Days. It is a reflective, critical (and self-critical), gripping, and, yes, tragic account of an important and pivotal movement in the 20th century. How it came to be, the forces which brought it into being, as well as the internal and external forces which ripped it asunder, are here for all to see — naked as a newborn.

What theory should we follow? What principles should drive our working inter-organizational relationships? Should we adopt Maoism? Marxism-Leninism? How do we fight the State? These questions and more are hashed out; some more thoroughly than others.

Gilbert is a fine writer, and despite the understandable reluctance to write this kind of movement memoir (many in the movement looked down on such things as individualistic), he does so with remarkable honesty, sensitivity, and insight.

What makes this work shine, however, is its forthright take on an issue that, even today is regarded with alarm — race.

Race — that is, the reality of race as lived by real people, in Vietnam, and in Harlem, opened an idealistic Jewish boy’s eyes into the dangerous knowledge that things weren’t as his teachers — or even his parents (not to mention his rabbi) — said.

Inquisitive, intellectually curious, questioning by culture and training, he sought his own answers of why the world was the way it was — and thus, albeit unknowingly, he began his trek towards the revolutionary road.

We learn, as was is the case with many of his generation, that the powerful, uncompromising orations of Malcolm X stirred him from his slumber. While a student at Columbia, Gilbert attends a speech by Malcolm — three days later the Muslim minister was assassinated. He also recounts the hypnotic and captivating power of Black music (rhythm and blues) that opened up a young, sensitive soul to the humanity and beauty of Black people. (We can only wonder what message lies encoded in today’s Black music, and what resonates in the minds of today’s white youth who listen.)

Gilbert has trod this ground before (of shortcomings of the white radical movement of the era) in some of his essays in No Surrender, but here, he recounts the missteps, the supremacist attitudes, and yes, the betrayals that occurred on that long, red road, one which has substantial echoes in American history whenever whites and Blacks opted to join hands against the rulers.

With Love and Struggle, David Gilbert adds heart and bone to the stuff of distant (mid-20th century?) history. He, in a sense, explains why we are where we are, in this schizophrenic nation, where our stated claims of equality fall lifeless and as dead as turned leaves before they hit the ground. In a sense, this work is a testament to the road not taken — against racism (in fact and not merely in symbol) and anti-imperialism (as the nation grapples in a slew of imperial wars).

To illustrate by way of example and pure serendipity, this very day, when I have completed the manuscript, a news report interrupts from a tinny whining local radio station. A 60-ish prison guard at SCI-Pittsburgh has just been indicted for over 90 counts of sexual abuse of prisoners, many of whom are themselves in prison on sexual abuse charges (usually of children).

The reporter, reading a wire service account, quotes the Allegheny County DA as saying “at least” 11 other guards will be arrested shortly for similar charges stemming from the rapes of imprisoned men — or their activities in forcing other men to sexually assault other prisoners. Now, one wonders, why is this even remotely relevant to the review of Gilbert’s book, a trek through the ’60s, ’70s, and ’80s?

Because Gilbert and his cohorts, idealists all, sought to transform American society, in part because 40 years ago, they saw the savagery the State unleashed at Attica, the upstate New York prison, where 43 people — prisoners and guards alike — were slaughtered by state troopers on orders of then-Governor Nelson Rockefeller. Gilbert and his comrades sought to wipe that kind of racist violence from the nation’s history.

Forty years later, we have rape prisons — unofficial, yes, but no less real. And for millions of Americans who pride themselves as reasonable, good, Christian folks (well, white folks), they could not care less.

They fought, imperfectly, to be sure, to bring forth another future — certainly not this.

For that, they should be studied.

For that, they should be taken seriously.

For that, Struggle should be read.

For that, they should be remembered.

[Celebrated political prisoner Mumia Abu-Jamal is an African-American writer and journalist, author of six books and hundreds of columns and articles, who has spent the last 29 years on Pennsylvania’s death row. Mumia Abu-Jamal’s book — Jailhouse Lawyers: Prisoners Defending Prisoners v. the USA — is available from City Lights Books. This review was first published at SocialistViewpoint.]