BOOKS / Pulitzer: A Life in Politics, Print, and Power 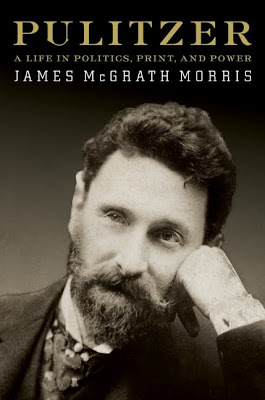 What goes up must come down. That seems to be as true of newspapers as of footballs hurled into the air by Vikings quarterback Brett Favre or Saints quarterback Drew Brees.

Indeed, these days newspapers are coming down fast and hard from coast-to-coast and in between too. Once upon a time, they were the lords of the land; now they are vassals to even more powerful lords like Google, which dares to tangle with Communist regimes in countries like China.

As newspapers fold around the country, and as circulation and ad revenue drops, the newspapers of yesterday have taken on new significance, and their editors and publishers have become more than figures of historical curiosity. “Who wants yesterday’s papers?” Mick Jagger asked rhetorically, and followed that question with a terse answer, “No one in the world.”

That’s no longer true. Yesterday’s newspapers are today’s treasure troves. They tell us how citizens were thinking and feeling, and what they were told to think and feel by press lords like Joseph Pulitzer, who ran a tight ship at the St. Louis Post-Dispatch and at The New York World until he died in 1911.

Pulitzer was everything that William Randolph Hearst, the legendary newspaper tycoon, was not. Pulitzer was Jewish and an immigrant. English was his third language, after Hungarian and German, and the United States was his adopted country. But like Hearst he had a passion for print media, and like Hearst, he made newspapers his business, his religion, and his personal credo. Along with Hearst, he helped to give birth to a particular form of American journalism that shaped the ideas and the opinions of the masses, and that created a mass culture.

James McGrath Morris burrows deeply into Pulitzer’s vibrant, explosive life, shakes off the cobwebs, and gives it a distinctly contemporary feeling. If the name Pulitzer rings a bell today it is probably because of the prizes that bear his name, and that are awarded to authors every year, sometimes deservedly and sometimes not. Morris’s book ought to change Pulitzer’s reputation and bring him out of the obscurity in which he now languishes.

A veteran of newsrooms, and radio stations, and an astute critic of the media, Morris is the author of two previous books about newspapers and reporters — The Rose Man of Sing Sing and Jail House Journalism. He brings to his biography of Pulitzer a keen appreciation of the craft of reporting, and the economics and the politics of the newspaper industry. Money is a bright thread that runs through his biography, and makes it of interest at a time when newspapers are struggling to survive financially.

Pulitzer: A Life in Politics, Print, and Power makes use of new and original sources — some of them rescued from a trash bin in St. Louis — along with a long buried memoir by Pulitzer’s brother, sibling rival, and nemesis, Albert, who sold his own newspaper The New York Journal to William Randolph Hearst.

In the 1890s Pulitzer and Hearst engaged in a war of words; both practiced what was called “yellow journalism.” They both urged the United States to go to war in 1898 and invade Cuba, though Morris feels that Pulitzer was not really a warmonger, and argues that on more than one occasion Pulitzer urged negotiations not gunboats or gunboat diplomacy.

Morris’s book is certainly not a repeat of W. A. Swanberg’s massive 1967 biography; from now on it will probably become the definitive work on the subject. Morris begins his story dramatically on Pulitzer’s yacht, the Liberty, in 1909, in Havana, Cuba, shortly before his death. He goes back to the beginning — to Hungary in 1847 — and he follows his story through the upheavals of 19th-century America — from the Civil War to the eve of World War I. Morris shows how the man who was born Politzer Jozsef turned himself upside down and inside out. An outsider, he became a consummate insider.

Though Morris does not defend everything about Pulitzer — certainly not his temper or his meanness to members of his own family and associates in the newspaper business — he tells a tale that is inspiring. The reader cheers Pulitzer as he arrives in New York, climbs his way out of the ghetto, and writes his own rags to riches story, just as the United States was beginning to flex its muscle as a military and industrial power.

The first 200 pages of the book are both entertaining and informative. They hold a reader’s interest. But from that point on, and beginning with the chapter entitled “The Great Theater,” the biography catches fire, and the writing becomes poetic, as for example when Morris says that Pulitzer was “willing to dance with the devil.”

Morris shows that Pulitzer played a major role in creating a provocative, perhaps almost diabolical newspaper style grounded in sensationalism. He shows, too, that he was unafraid to take on the powers-that-be, including President Theodore Roosevelt who thought he was libeled in the pages of The World.

However, even while Pulitzer attacked the wealthy and the powerful in his flagship newspaper, The New York World, he moved in elite circles and rubbed shoulders with the likes of J. P Morgan, John D. Rockefeller, and Cornelius Vanderbilt. He turned his back on the masses and embraced millionaires.

Morris’s biography suggests some of the ways that today’s bloggers and editors might attract new audiences. Indeed, Pulitzer had a knack for publishing front-page stories that had the nation at large talking, debating, and almost battling one another. William Randolph Hearst learned from him, borrowed some of his techniques, and gave him a run for his money, as Orson Welles’s biopic Citizen Kane shows.

In his time, Pulitzer was as charismatic as Hearst, and as famous, too, and reading this biography one wonders why Welles didn’t make a “Citizen Pulitzer.” Perhaps a bright, young director — or even a well-established director like Martin Scorsese, for example, who knows the historical period intimately — will do just that.

Morris’s biography is ready-made for the movies, with big scenes and larger-than-life characters. It looks back to an America when the daily newspaper was an essential part of life, and it makes America itself as much of the story as Pulitzer. Morris’s biography offers hope for the future of journalism, too.

[Jonah Raskin teaches in the communication studies department at Sonoma State University. He is the author of Field Days: A Year of Farming, Eating and Drinking Wine in California.]