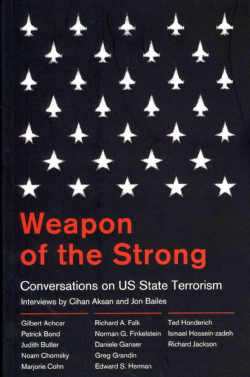 ‘Weapon of the Strong’
Interviews from ‘State of Nature‘

Throughout the text is an underlying question of language and its meaning. Why is one act considered terrorism while another act that is essentially the same not considered so?

The interview is one of the journalist’s best tools. If done right, an interview provides a considerable amount of information about the views of the interviewee and interviewer, while also informing the reader about the subjects covered.

Certain journalists made the interview an art form in its own right. Relatively recent examples of this include Jann Wenner’s Rolling Stone interview with John Lennon in 1971, David Frost’s interview of Richard Nixon in 1977, Alex Haley’s interview of Malcolm X, and Ignacio Ramonet’s interview of Fidel Castro.

Two of these interviews have been published in book form (Ramonet and Castro; Wenner and Lennon, with the Lennon interview being twice made into a book); one was related to one of the best-selling books of the 20th Century (Alex Haley’s Malcolm X); and the Frost-Nixon interviews were watched by millions on television, while also being remade into a film drama almost 30 years later.

I mention these interviews as a means of introducing the first book by the editors of the political-cultural web magazine State of Nature. This book, titled Weapon of the Strong: Conversations on U.S. State Terrorism, features 13 interviews.

The interviewees are philosophically from the left side of the political spectrum and come from five different countries. They include Noam Chomsky, attorney Marjorie Cohn, several professors and the director of the Swiss Institute for Peace and Energy Research. The interviewers and editors are Cihan Aksan and Jon Bailes.

The conversations cover topics that include state-sponsored terrorism, the Unites States as a terrorist state, the nature of economic terrorism as facilitated by the International Monetary Fund (IMF) and the World Bank, the role of the United Nations, and the U.S. role in the Middle East, to name but a few.

Throughout the text is an underlying question of language and its meaning. Why is one act considered terrorism while another act that is essentially the same not considered so? Is it the actor that determines whether or not an act is terroristic? Why is the U.S. hesitant to accept the commonly held definition of terrorism? Is the reason that doing so would indict the United States as a terrorist state?

These are just a small number of the questions raised and addressed in this tightly edited and intellectually stimulating collection.

Chomsky discusses the pointlessness of international law given the fact that it is the most powerful nations (most specifically, the U.S. and UK, although Russia and China have managed to counterbalance some excesses) that set up structures to implement it. Furthermore, their sheer power creates a situation where their actions define the nature of those structures, Should a group of smaller nations decide to go against that nature, the more powerful just ignore those demands.

In South African Patrick Bond’s discussion of Washington’s economic terrorism, Bond brings up the inability of Nelson Mandela to refuse the IMF structural adjustment forced on his nation after the end of apartheid. This “adjustment” included insisting that the new government pay off the prior government’s debts. Bond and the editors rightly point out that South Africa was a victim of U.S. economic terrorism.

One need look no further than Cyprus to see the latest victim of this form of terrorism. It can be argued that the terrorist regime in the case of Cyprus (and Greece, Spain and Portugal) was the European Union and Germany, but in doing so, one would have to ignore the role played by giant U.S.-based financial houses in the manipulation of those nations’ economies the past decade.

They tie up these and other instances of U.S.-sponsored genocide and brutality with the knot of U.S. imperialism, still humanity’s number one enemy.

This is a valuable text. Building on themes addressed on their State of Nature website, Aksan and Bailes have compiled an intellectually challenging and forthright collection of conversations certain to create further conversations of their own. Each interview could easily stand alone. Together, they overwhelm.