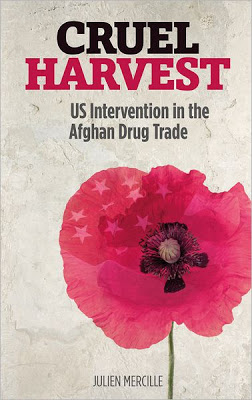 Cruel Harvest does not claim that the U.S. is in Afghanistan because of the drug trade, either to end it or to profit from it. The text does explain that Washington has used drug profits to fund its covert and not-so-covert military and intelligence operations.

The United States invaded Afghanistan over 11 years ago. Men and women who were seven and eight years old are now enlisting in the military. Some of them will end up walking the streets and trails of that faraway land before their enlistments are up. Even if the Obama administration keeps its pledge to withdraw 34,000 U.S. troops in the next year or so, there will still be rotations and special forces in and out of Afghanistan for years if Washington’s plans are not derailed.

Likewise, the Afghan opium trade will continue. Regarding that trade, questions often arise concerning its relationship to the battle on the ground and the groups fighting that battle. As those who watched the Soviet military disintegrate in Afghanistan during the 1980s will remember, news stories occasionally appeared in the U.S. media that mentioned the growing rates of drug addiction and use among Soviet conscripts. These mentions usually occurred in relation to the U.S. desire to “make Afghanistan the Soviets’ Vietnam..” After all, the rampant drug use among American conscripts during its war in Vietnam was well documented.

Despite apparent Pentagon efforts to hide the fact, some U.S. soldiers and Marines in Afghanistan certainly take advantage of the opium and marijuana products produced in Afghanistan. However, the Pentagon seems more concerned with prescription drug and steroid abuse by its troops. However this doesn’t mean there is no U.S. interest in the Afghan drug trade

Julien Mercille, author of Cruel Harvest: U.S Intervention in the Afghan Drug Trade, points out that the United States goverment meets its own definition of a narco-terrorist organization. This definition (provided by the U.S. Drug Enforcement Administration (DEA) during testimony before Congress) describes such organizations as those groups which are “complicit in the activities of drug trafficking to further premeditated, politically motivated violence to influence a government or group of people.”

If this is narco-terrorism, than not only is the U.S. government involved; it can be reasonably argued that it almost invented the practice. To prove his point, Mercille reviews the complicity of the Central Intelligence Agency and its predecessor, the Office of Strategic Services, in the drug trade since World War II. Drawing on the work of Alfred McCoy (The Politics of Heroin) and others, he adds the intrigue in Afghanistan to that history.

In looking at McCoy’s work, Mercille acknowledges and accepts the volume and depth of the research he brings to the subject. At the same time, he rejects McCoy’s assumption that, even though the CIA was trafficking in drugs, other agencies in the U.S. government were fighting the drug trade. Other researchers on this apparent interagency conflict include Douglas Valentine, whose books The Strength of the Wolf and The Strength of the Pack chronicle in concise detail the corruption, conflicts and lies of the DEA and its predecessor the Bureau of Narcotics and Dangerous Drugs.

Despite the incredible research and writing involved in these books, it seems safe to assume that their readers know only a small portion of the story they tell, due to the nature of the topic and the secrecy and subterfuge of the agencies involved.

Cruel Harvest takes a sharp look at the history of U.S. intervention in Afghanistan since the 1970s. It provides a background to U.S. intervention in Afghanistan and the surrounding region while examining the growth of CENTCOM, the Pentagon command in that part of the world. Mercille exposes the lies told by Jimmy Carter, Ronald Reagan, and CIA man Bill Casey about Soviet intentions for the country and emphasizes that it’s the occupation that fuels the current insurgency, not the drug trade.

Merceille substantiates the claim made by many in the anti-war camp that the U.S.-NATO intervention in Afghanistan is nothing but an attempt to establish Washington’s dominance in a country where no outside power has done so for any extended period since Alexander the Great.

Claims about freedom, women’s rights, and every other excuse provided are proven to be untrue. Even drug prevention is shown to be a sham. After detailing Washington claims that the Taliban are partially funded by opium production, Merceille points out that most of the U.S. allies in Afghanistan, including the Karzai government, are involved in opium and heroin production, as well.

Indeed, the head of the Northern Alliance, Washington’s first ally in the mujahedin phase of the war in the 1970s and 1980s, was (and remains) a well-known drug lord. It becomes clear by the end of this book that Washington is not interested in eradicating drug production and trafficking. It just wants to ensure the people profiting from the business are willing to work in Washington’s interest.

Cruel Harvest does not claim that the U.S. is in Afghanistan because of the drug trade, either to end it or to profit from it. The text does explain that Washington has used drug profits to fund its covert and not-so-covert military and intelligence operations. It also points out that, while poppy farmers who pay taxes to the Taliban are targeted, those that align themselves with the U.S.-supported regime rarely are. Furthermore, it makes the point that this practice is intentional.

Mercille’s relatively short work is a useful, extensively cited and fact-laden discussion of the role narcotics production plays in the U.S. occupation of Afghanistan.