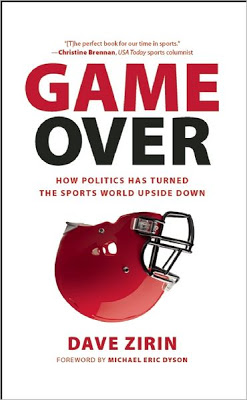 A look at Dave Zirin’s latest:
The man who politicized the sports pages

When journalists wanted to paint crazy pictures using alliteration and description, then the place for them to write used to be in the sports section. Speculation and flights of poetic fancy were not only allowed but expected.

That most iridescent of journalists, Hunter S. Thompson, began his fabled writing career reporting on sports. One of his earliest national pieces was an impressionistic, iconoclastic report on the most famous of horse races, The Kentucky Derby.

As the reader knows, Thompson went on to produce some of the best cultural criticism and political reportage of the 1960s and 1970s. In his later years his books and articles combined his twin passions of sports and politics into a series of incisive and funny collections on the decline of U.S. civilization in the name of profit.

Thompson has never been replaced. Most sports journalists nowadays use up their ink rewriting the words of management and ownership or attacking superstars they seem to build up just to knock down. Mock expressions of shock accompany reports of steroid use and pot possession, yet there is little analysis of how and why athletes might feel the need to use either type of drug. No matter what they write about, the writing itself is all too often nothing but a repetition of press releases, especially when compared to a master like Thompson.

But wait, there is a sportswriter out there whose writing is different. His reportage includes political critique and is laced with humor and sarcasm that make your sides hurt. Considerably more radical than Thompson (especially in his later years) Dave Zirin takes the world of sports and rips it open for all to see. His latest book, titled Game Over: How Politics has Turned the Sports World Upside Down, examines the world of sports in the age of the Arab Spring, Occupy Wall Street, and their opposite in the halls of power and capital.

CLR James wrote about the meaning of cricket in the colonialist world of Trinidad; Curt Flood and Jackie Robinson, each in their own way, ripped away the mantle of racism in Major League Baseball; Jon Carlos and Tommy Smith raised their fists against the racism of Avery Brundage’s country club apartheid Olympics; Lester Rodney ripped away the white robe of racism in U.S. sport.

Dave Zirin carries this legacy into the twenty-first century, taking on those people and institutions that have crippled sports in the name of profit and power while championing those athletes and others who have used their name and position to make sports a force for change.

In his introductory remarks, Dave Zirin discusses the return of politics to the field of play. Once again, the basketball court, football field, baseball park, and hockey rink have become forums where players dare to vocalize their opinions on issues of the time. From gay rights to labor rights, racism, and war, players are once again making their opinions public and using the forum their career provides to sway public opinion.

Although Zirin concerns himself primarily with the U.S. sports world, he covers international soccer and the Olympics, too. In fact, one of his most evocative pieces in this book is titled “Today’s World Cup and Olympics.” Perhaps the most unique chapter is the chapter discussing Egypt’s Ultras.

For those who don’t know, Ultras are soccer fans found in almost every country where soccer is played who literally live and die for their team. In the case of the Egyptian Ultras, they involved themselves in the ongoing uprising in that nation and were crucial to Mubarak’s overthrow. In a very real way, these fans changed the course of their nation’s history.

Although he would probably never acknowledge it, Dave Zirin is a big part of the reason politics is back in sports. His commentary, lectures, and other appearances have challenged athletes to speak out and sportswriters to respond to the political role sports plays in the world.

Who would have thought when his first columns were published in the small-time Maryland weekly The Prince George’s Post a little over a decade ago that he would become a regular on ESPN, a sportswriter for The Nation and SLAM Magazine, and the author of several books; that his words would be read in the corporate boardrooms of professional sports teams and attacked by shills?

There was obviously a need for the type of writing that Zirin does and he does a remarkable job of filling that need.

One does not have to go too far back to a time when Michael Jordan’s hang time and George Steinbrenner’s Yankees were what people talked about in U.S. sports; when no player dared to speak out about issues of the day. The combination of a growing grassroots movement against imperial war, the economic policies of the “1%,” the ongoing struggle against racism, and the movement for LGBT equality have changed that.

With Zirin helping to lead the charge, the world of sports will never be the same. That, my friends, is a good thing.

Read articles by Dave Zirin at The Rag Blog.