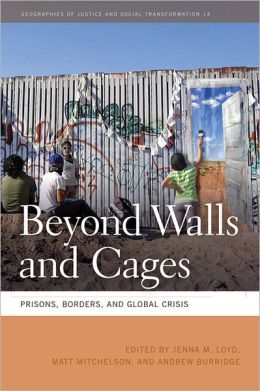 Incarceration complex:
The desire to imprison

Walls and Cages provides example after example of how central the business of incarceration is to the U.S. power elites in the twenty-first century.

Every day, the role of incarceration in the business of our nation becomes more noticeable. In California, 30 thousand prisoners are conducting a hunger strike demanding (among other things) an end to long-term solitary confinement and group punishment, and for better food and medical care.

In Vermont and other states, there is an ongoing campaign against private prisons and the shipping of Vermont prisoners to other states. Immigrants across the land are being thrown into detention facilities just because they are immigrants, often without papers.

The desire to imprison overrides almost any other function of law enforcement in most localities, while the number of laws requiring imprisonment is constantly increased with no regard for the damage such laws inflict.

It can be reasonably argued that this drive towards incarceration is occurring due to the incredible amounts of profits this dynamic creates for a few well-connected corporations. It can also be reasonably argued that the fact that most of the prisoners and detainees are people of color is directly related to a history of enslavement and control of that population in the United States.

A new book, Beyond Walls and Cages: Prisons, Border, and Global Crisis, utilizes both of these arguments as the basis for its examination of the role the prison-industrial complex plays in the modern U.S. corporate state, while also looking at movements working to change the system.

A collection of essays, articles and reflections by prison abolition activists, immigrant rights workers, and former detainees, Beyond Walls and Cages uses the concept of prison abolition as its foundation. By doing so, it rips away the idea that prisons can be reformed. After all, a reformed prison is still a prison. Their existence represents the perceived need by the power elites to control the poor and disenfranchised.

Nowhere is this more true in today’s world than in Washington’s current policies regarding immigrants. The only reason these people are detained is that they are immigrants. Most have committed no crime. Even among those who have been convicted, the majority of the convictions are for what most citizens consider minor offenses. Of this latter group, most have been naturalized and are only detained because of changes in immigration laws that were designed with no other purpose but to detain them.

When it comes to the current immigration policy of “catch and return,” it is clear that the motivation behind the policy is twofold: to punish and to make money from that punishment. As the essays in this book make repeatedly clear, this is what motivates the entire system of imprisonment and virtually every element associated with that system.

As this book also makes clear, this is a bipartisan effort. Like with Washington’s policy on imperial war, there is little dissent among mainstream politicians and authorities over the necessity for war and incarceration, only over how best to prosecute them.

Walls and Cages provides example after example of how central the business of incarceration is to the U.S. power elites in the twenty-first century. From the denial of voting rights to the criminalization of migration; from the focus of law enforcement and prosecution on poor and mostly non-white communities to the media representation of immigrants and others as innately criminal.

This is a radical book that strips away any pretense that prisons and policies designed to place as many people as possible in them can be humane. The writers  issue a clear and thoughtful call to reconsider the entire concept of prisons on which U.S. society and its institutions have based their approach to dealing with the poor, non-white, and others with little power.