BOOKS / Ron Jacobs : Iran and the Coup of Coups 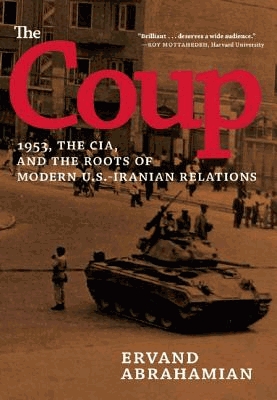 Abrahamian’s ‘The Coup’:
Shah of Shahs on the Peacock Throne

As Abrahamian tells the reader, in the eyes of London and DC, there was no room for genuine negotiations in their dealings with the Mossadegh government. The struggle was about control of Iran’s resources and regional geopolitical power.

If there is one nation whose political situation has been omnipresent and important to the history of the past 75 years, it would be Iran. Much to the dismay of those imperial powers that have tried to subdue and manipulate them, Iran’s people have refused to go along.

Islamic revolutionaries or leftist revolutionaries, military men and civilians, it doesn’t matter. The imposition of foreign restrictions and regimes have consistently failed to withstand the desire of the Iranians to be free of foreign domination. Britain, Russia, and the United States; all have tried and all have failed to make Iran do their bidding for more than a generation. None have tried harder than the United States, which took over from Great Britain after World War II.

What ranks as the most flagrant attempt to impose Washington’s will on the people of Iran has to be the 1953 coup engineered by Kermit Roosevelt and the Central Intelligence Agency (CIA). This coup, which overthrew the elected leader of Iran, Mohammad Mossadegh, continues to define the relationship between Washington and Tehran. Furthermore, it ranks as one of the twentieth century’s top examples of colonialist arrogance underpinned by dismissive racism and outright contempt for the subject people and their will.

Until recently the story of that chapter of history was told in the West by those who traditionally frame history — the victors. In other words, the history of the 1953 U.S. coup in Iran was told by the CIA and its media supplicants. Like with most other tales told by these elements, the overthrown government was characterized as dictatorial, unpopular, communistic, and even fanatic. Therefore, goes the narrative, the CIA did the Iranian people a favor, just like they did in Guatemala around the same time.

In the year 2000, The New York Times published a series of articles based on classified documents detailing the workings of that coup. After receiving heavily redacted files which were written as a summary of the coup by a CIA operator, the Times re-summarized the material.

Even though a good deal of information was missing, and the Times itself had cheered the coup when it occurred, this series began to provide Western readers with a glimpse at exactly how intimately involved Washington was in the overthrow of the Mossadegh government. Furthermore, the Times report indicated that a primary reason for the coup was control of Iran’s fossil fuels, not any threat of communism (as had been previously reported) and not because Mossadegh was a fanatic dictator.

Still, there were several aspects of the story that were missing. Some of these were filled in with the publication of Kermit Roosevelt’s self-glorifying history of the coup titled Countercoup: The Struggle for the Control of Iran. Most however, were not, largely because Roosevelt remained convinced that the coup he engineered was the right thing to do for Iran and the world at large. Therefore, he ignored remarks and findings that claimed something else.

A new book changes all that. Titled The Coup: 1953, the CIA, and the Roots of Modern U.S.-Iranian Relations, the book is authored by the Iranian scholar Ervand Abrahamian. A learned historian, his 2008 book A History of Modern Iran provides a reappraisal of modern Iranian history unfamiliar to most U.S. readers. The Coup does that and more.

Indeed, it takes the familiar history — a history that is primarily lies — and debunks almost every bit of it. Mossadegh was not a communist; the Tudeh (Iranian Communist party) did not control the government and did not intend to overthrow Mossadegh; the Islamists under Imam Khatani did get bought off by the CIA; and the coup was not only cheered, but supported by a comprador class of Iranians concerned primarily with their wealth and not with the nation or the Iranian people.

As Abrahamian tells the reader, in the eyes of London and DC, there was no room for genuine negotiations in their dealings with the Mossadegh government. The struggle was about control of Iran’s resources and regional geopolitical power. Reading this argument, I was reminded of the lack of compromise from Washington and London prior to the 2003 invasion of Iraq. If one recalls, no matter what they said publicly, Bush and Blair were not interested in making a deal with Iraq; their governments wanted complete control.

Abrahamian also dispels the myth that the crisis and eventual coup were the fault of the Iranians, a premise put forth by observers as venerated as Daniel Yergin, the author of the classic work on oil politics of the mid-twentieth century, The Prize. Instead, through his reading of recently discovered documents and his own insights, Abrhamian makes it clear the crisis was engineered and brought to its fruition by Washington, DC.

While reading the last section of this book describing the procedure leading up to the actual coup, the reader might well be struck by how little has really changed when it comes to the West’s dealings with Iran. In fact, when reading about the British-backed and enforced oil embargo against Iran after the Iranians nationalized the industry, one cannot help but compare that historic attempt to destroy Iran’s economy to the current embargo led by Washington.

Abrahamian describes sanctions, ultimatums presented as negotiations, lies about the Iranian leadership, and CIA subterfuge. It is almost like reading today’s New York Times and its coverage of U.S.-led operations against the current Iranian government. Not only is this book important because of its presentation of history. It is also important because it might be predicting the future.

1 Response to BOOKS / Ron Jacobs : Iran and the Coup of Coups