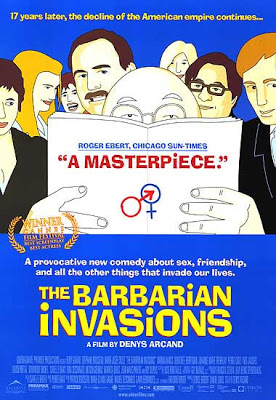 The great 2003 movie The Barbarian Invasions justifiably won the Best Foreign Film Oscar and was nominated for 66 other awards (including Best Screenplay Oscar) from 33 bodies in 14 countries. Writer-director Denys Arcand was nominated for or won 32 Best Picture awards, six Best Director honors and five Best Screenplay statuettes. The outstanding cast was showered with awards, with five noms or wins going to Marie-Josée Croze, three to Rémy Girard, two to Stéphane Rousseau, and one each to Pierre Curzi and Dorothée Berryman.

This is a fine sequel to Arcand’s 1986 art-house hit The Decline of the American Empire, returning much of the first film’s cast. In Invasions a Montreal college professor is dying of cancer. His wealthy son, from whom he is semi-estranged, flies to Montreal from London to find his father bitter and lonely in an overcrowded hospital room. He pulls strings to buck red tape and get papa a large empty room and then persuades several of his old pals to come and be with him. When pain becomes intense, he arranges for the junkie daughter of an ex-mistress to get him heroin for relief.

This is a wonderful movie: intelligent, rich in character, witty, moving, and beautifully shot — particularly at a lakeside house where he goes to die, surrounded by those he loves. The script is constantly surprising and never maudlin. The changing relationship between father and son is terrific.

More than 92.3% of the 18,999 viewers rating it at imbd.com gave it thumbs-up. Peter Travers of Rolling Stone called it “a feast of smart, sexy, glorious talk.”

I loved this film when I first saw it in 2003 and when I watched it again via Netflix this week. Once more I marveled, I laughed, I cried, and I crawled on my belly like a reptile.