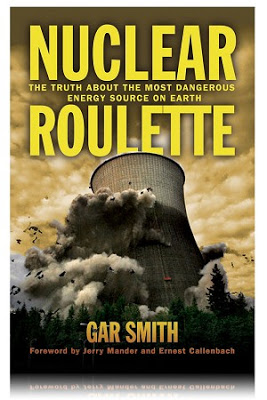 Gar Smith makes the case:
‘No Nukes’ is still the right call

The collection of facts, figures, and overall documentation of the industry’s lies, foibles, miscalculations, and just plain duplicity should insure the addition of more to the ranks of the anti-nuclear forces.

Despite spending several days in detention facilities in the late 1970s and early 1980s because of my opposition to nuclear power and its consequent dangers and debris, I honestly never thought nuclear power would be gone by 2013. The setup for the industry was just too sweet of a deal.

However, I did have hope that nuclear power’s reputation would be so tainted that no new plants would ever be considered. Unfortunately, even those hopes were for naught. To make matters even worse, nuclear power — perhaps the most wasteful and most dangerous form of power generation — is actually being touted as a “green” source of power.

This support is not just coming from the industry, either. One-time opponents like Whole Earth Catalog editor Stewart Brand and former Greenpeace president Patrick Moore are now on record as supporters of a power source and industry they used to oppose vehemently. When considering these retreats, the phrase “two steps forward, one step back” comes to mind.

Fortunately, a recently published book by journalist Gar Smith provides those who still oppose nuclear power with a valuable text filled with arguments and facts designed to convince any thinking citizen of earth about nuclear energy’s intrinsic manifestation of Thanatos and his kingdom.

Furthermore, the collection of facts, figures, and overall documentation of the industry’s lies, foibles, miscalculations, and just plain duplicity should insure the addition of more to the ranks of the anti-nuclear forces.

If one adds the truths of what has seen regarding the industry (most recently in Fukushima, Japan), the hopes for a revived movement in the streets opposed to nuclear power seem legitimate. Indeed, as I write this, news of a massive protest against the restarting of Japan’s nuclear plants is reaching my newsfeed.

Like other books of its kind, Smith’s book, Nuclear Roulette: The Truth About the Most Dangerous Energy Source on Earth, provides an unrelenting litany of accidents and near catastrophe hidden, falsified, and supported by the agencies supposedly set up to protect the public from nuclear power’s inherent dangers.

What is presented here is the story of these agencies’ longtime collusion with and intentional lying for the industry. The health and environmental reasons to oppose nuclear energy are manifold. Even if some can never be proven, there are enough instances available to make any argument for continuing this folly moot.

Unfortunately, as I noted before, this has not been the case. So, to those who would deny the negative effects to health and environment, it would seem that the cozy and corrupt relationship between the nuclear industry, the war machine, and elected U.S. officials would be reason enough to oppose (or at least critically examine) the reasons this expensive, wasteful, and anti-democratic energy product continues to receive taxpayers’ money.

Nuclear Roulette does a great job enumerating this dynamic. The payoffs to politicians in the form of campaign contributions and subsequent legislation creating a liability cap for the industry are but the most obvious ways in which the energy industry has seduced and simultaneously reduced the role of the NRC to one that goes beyond sycophancy and into the realm of subservience.

Even when state governments have demanded the shutdown of plants inside their borders, the federal government has overridden those decisions. If that isn’t a denial of the people’s will, then nothing is. Smith enumerates other instances of the government not doing its job when it comes to overseeing the industry.

As Smith writes when discussing the NRC, “If you don’t look for problems, you won’t find them.” In essence, this is the approach the NRC has taken for decades. Of course, such an approach creates a false sense of security and enhances any potential dangers that might be present.

One of the more interesting aspects of Nuclear Roulette is when the author discusses the costs of nuclear energy in relation to the cost of solar, wind, and other alternative forms. It is Smith’s contention that we are near (if not at) the point where alternative forms are more cost effective, even in the short run.

In other words, even when one leaves out the long-term environmental costs of nuclear energy, the cost to build and maintain non-nuclear alternative forms is equal or less than those required for nuclear. This is good news. The bad news is that the industry opposes the best solution — decentralized power such as rooftop panels and turbines — precisely because it is decentralized.

Although the book focuses primarily on the United States, there are plenty of words devoted to Japan and Europe.

If Nuclear Roulette were a fiction book, it would be classified somewhere between crime and horror fiction. Unfortunately, it is all too real. However, the reality it discusses is still both a crime and a horror.

[Rag Blog contributor Ron Jacobs is the author of The Way The Wind Blew: A History of the Weather Underground. He recently released a collection of essays and musings titled Tripping Through the American Night. His novels, All the Sinners Saints, The Co-Conspirator’s Tale, and Short Order Frame Up were published by Fomite Press. Ron Jacobs can be reached at ronj1955@gmail.com. Find more articles by Ron Jacobs on The Rag Blog.]