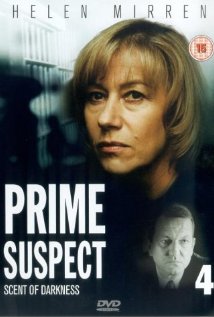 Prime Suspect is a great series of nine British TV cop movies in which my favorite actress, Helen Mirren, plays a Scotland Yard police detective who fights sexism and her own demons while leading a team that solves major crimes. It ran from1991 through 2006 and was so good that it won 28 major awards, including 12 BAFTAs, three Edgars, two Emmys and a Peabody.

Helen Mirren took 11 of her 76 major awards for this series. She earned an Oscar for The Queen, four BAFTAs, four Emmys, four SAGs and three Golden Globes, as well as 61 more nominations for works including Cal, The Madness of King George, Gosford Park, and The Last Station.

Most of the Prime Suspect movies were 3-1/2 hours long and aired on PBS’s Mystery! in two-to-four parts. Prime Suspect 4 was an exception, consisting of three separate mysteries and running slightly more than five hours total.

Technical advisor on Prime Suspect was Jackie Malton, who, when the series began, was one of only four female DCIs (Detective Chief Inspectors) in Britain. The writer of the first and third series (and the story for the second) was prominent scribe Linda La Plante, who earned the 1993 Edgar award from the Mystery Writers of America for the first one. Allan Cubbit’s teleplay for Prime Suspect 2 won the show another Edgar for “Best TV Feature or Miniseries.”

Prime Suspect was voted 68th on the British Film Institute’s list of “100 Greatest British Television Programs,” and in 2007 it was listed as one of Time magazine’s “100 Best TV Shows of All-TIME.” All episodes are available on Netflix and YouTube.

In the first series, sexism in the workplace was a significant subplot and barrier to the investigation. Sequels tend to downplay this theme, relying on straight procedure or on other subplots — for example, racism in Prime Suspect 2 and pedophilia, child abuse and prostitution in Prime Suspect 3.

Tennison’s difficulty in achieving a balance between her work and her life outside the job as well as her difficulty in maintaining stable relationships are recurring issues. As the series progresses, she increasingly relies upon alcohol to help her cope.

The first five series were produced at a steady pace of one roughly every 18 months, until Mirren left the role to avoid typecasting. She returned to the character after a seven-year gap.

In the first Prime Suspect, DCI Jane Tennison, who has been passed over many times, takes over the case of a rape-murder of a young woman from a fellow DCI who had a heart attack just before he’s ready to charge their prime suspect. The murder squad she takes over is hostile to her; the men upstairs are eager to pull the plug on her investigation; her personal relationships suffer from her obsession with work, and the prime suspect remains elusive. This one won four BAFTAs, including one for Mirren.

In Prime Suspect 2, a body is found in the backyard of a home in an Afro-Caribbean neighborhood of London, and Tennison has to tread carefully in her investigation because of racial tension surrounding unsolved crimes in the region. Colin Salmon co-stars as a black officer with whom Tennison has an affair, and when that fact is disclosed in the media, it threatens her position. Mirren took another “Best Actress” BAFTA and the film won an “Outstanding Miniseries” Emmy.

While she is working in the vice squad targeting Soho, Tennison’s Prime Suspect 3 investigation takes her into a child prostitution and pornography ring following the death of a young male hooker in the home of a female impersonator. The episode guest stars Tom Bell, David Thewlis, Ciarán Hinds, Peter Capaldi, Mark Strong, James Frain, and Jonny Lee Miller. The show won an Emmy and a BAFTA, and Mirren also won a BAFTA.

Prime Suspect 4 was three separate 102-minute episodes. The Lost Child is a sex murder that points to a convicted child molester, but Tennison, now promoted to Superintendent, uncovers links to dark deeds involving local government.In Inner Circles (see episode here), Tennison uncovers a possible political scandal when probing the murder of a country club manager. Mirren won her first-ever “Outstanding Lead Actress” Emmy for The Scent of Darkness, in which the killer from the first Prime Suspect is suspected of a series of murders.

Series 5, 6 and 7 involve a drug dealer murder, the killing of a Bosnian refugee and the slaying of a teenage girl. The latter won Emmys for Mirren, the writer, and the director.

All nine of these mysteries are truly outstanding, and Helen Mirren is consistently terrific in them.

Let me end with a personal Mirren story. Decades ago, during an L.A. concert intermission, my wife pointed out Helen Mirren, standing in the lobby with a white-bearded man who looked like singer Kenny Rogers. (He was her future husband and Oscar-winning Ray director Taylor Hackford.)

I rushed over and gushed, “Pardon me for interrupting, but I think you are the greatest actress on the planet, and I love everything you do!” Big stars hear this kind of thing a lot, but Helen was so classy that she leaned over and kissed me on the cheek. Pointing to that facial part, I exclaimed: “I’ll never wash again!,” to which my wife replied,” Oh, yes you will.”