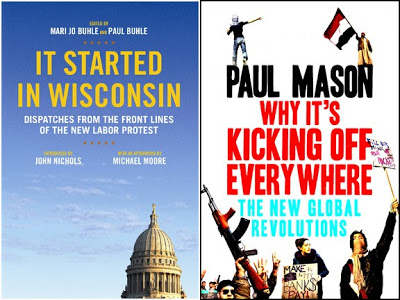 Sparks and wildfires:
Wisconsin and the global revolutions:

It was about a year ago that the protests against the anti-worker legislation in Wisconsin were reaching their zenith. What had begun as a concerted effort by the Teaching Assistants Association at University of Wisconsin, their supporters, and some other activists grew into the largest pro-union/pro-worker movement in decades.

The use of tactics not seen since the 1960s, including building occupations, was essential to its organizational success. Unfortunately, the right-wing majority in the state government was equally determined to end collective bargaining rights for public workers and on March 9, 2011, passed the legislation in the dark of night.

However, the spark was lit. The eruption of popular protest against the neoliberal corporate agenda that most of the world had already experienced by the winter of 2011 had finally reached the nation most responsible for that agenda — the United States.

The rest of the year would see the expansion of that protest across the United States grow in dimension and breadth. From further State Capitol occupations to the occupations of city parks, the masterminds and profiteers of the neoliberal economy were put on notice.

Meanwhile, protest from like-minded citizens of the rest of the world also continued to spread. Politicians scrambled as they figured out how to respond to what was clearly a left-oriented popular movement against those who had bought and sold them long ago.

Naturally, there have been millions of words written and published about this wave of people power. A very recent collection of some of those words edited by Wisconsinites Paul and Mari Jo Buhle, is titled It Started In Wisconsin.

The book begins with the first essayist attempting to place the protests firmly in the tradition of the great Progressive Robert LaFollette. However, the very fact that the movement ended up being confined to the traditional Democrat-Republican contest made even the more left elements of the Progressive philosophy irrelevant in the final outcome.

It Started In Wisconsin tends to examine the uprising and its politics from a generally anti-corporate perspective but, like the movement itself, never truly challenges capitalism at its roots as an essentially unequal system that by its nature requires growing levels of inequality.

There is one essay that stands out from the rest of those that analyze the movement in that it does look beyond the façade of neoliberalism. That essay, titled “The Role of Corporations” by Roger Bybee, is the most radical in the book. Radical, that is, in the fundamental definition of the word: “of or going to the root or origin.”

The essay is a clear and straightforward description of how neoliberal capitalism works, who it benefits and, to put it bluntly, who it screws. No other analytical piece between these covers quite approaches the clarity and depth of analysis like Bybee’s.

Yet, this book is not really about analysis. It is a collection of stories from those that participated in one of the most inspiring movements to erupt in the U.S. heartland in decades. Those stories provide the observer from afar with a fairly universal and nuanced look at the daily lives of those involved in organizing, occupying, reporting and otherwise participating in those weeks of popular democracy.

Interspersed between the tales of the workers, students, farmers and other protesters are a number of photographs and comics. The inclusion of these graphics truly enhances the overall effect.

One of the last two essays in It Started In Wisconsin discusses the position of the Wisconsin uprising in the global insurrections of the past 18 months. The authors of this short essay, Ashok Kumar and Simon Hardy, briefly discuss the possibilities and take a quick look at the lessons they see to be learned.

In addition, and most importantly, they broach the subject of the differences between the radical grassroots and the more conservative entrenched union and political leadership. It is here, they hint, that the real direction of this global movement will be determined.

In Wisconsin that outcome has already taken one turn with the shifting of the uprising’s momentum into the recall efforts against Governor Scott Walker. The outcome of this turn to electoral politics is still being hotly debated by many of the uprising’s organizers, with some of them refusing to endorse the Democratic candidate opposing Walker because they see him as just more of the same.

Moving from the local to the global, let us consider another recently published text that takes a look at the international manifestations of this movement.

This book, titled Why It’s Kicking Off Everywhere: The New Global Revolutions is authored by journalist Paul Mason. Like the Buhle’s effort, Mason’s book describes the movements against neoliberal intolerance and authoritarianism that have become part of the collective imagination this past year. Likewise, Mason’s text examines the politics of the movement from what can only be termed a New Left viewpoint.

What this means is that he places the emphasis on the cry for freedom implicit in these protests while underemphasizing the economic nature of the oppression the protesters are rebelling against.

Given the broader scope of Mason’s text, there is also a broader discussion. Several different manifestations of the movement — from Greece to London to Cairo to Spain and other points in between — are reported on. These reports are good journalism. One feels as if they are present at the rallies, occupations and riots that Mason describes.

The anecdotal tales he provides should remind anyone who participated in any kind of popular resistance in the past decades of the energy and hope one finds and feels at such events. These are the stuff that makes one join such movements.

When it comes to analysis, Mason’s text provides some interesting possibilities. He spends a fair number of words discussing the desire for freedom this global movement represents. The Egyptian opposed to the harshness of the Mubarak authoritarian regime and the British student fearing the limitations a life without affordable education will create are examined through what Mason calls the social laboratory of the self.

He emphasizes the role of social networking and the existence of a new dimension in organizing directly related to the existence of networking technology. He rightly questions the validity of the Left, but does not really examine what he means by the Left, choosing instead to adopt the mainstream media’s definition that the Left is composed of political parties like Labour In Britain, various elements of the Democratic Party in the United States, and numerous sects espousing various versions of Leninism.

By dismissing the Left, even in its current splintered formation, Mason is also dismissing a more radical analysis of the true culprit in the global economic catastrophe.

It is true, as Mason makes clear, that neoliberal policies are responsible for the numerous maladies the global uprising sprang from. However, what is unexplored in Why It’s Kicking Off Everywhere is why neoliberal capitalism is the dominant economic regime on the planet. That explanation can only come from an understanding of the economic works of Marx and his theoretical successors like Nikolai Bukharin, Rosa Luxembourg, and even Lenin. It was these thinkers and revolutionaries, after all, that studied and explained the stages of capitalism in the industrial world and how they would come about. So far, they have been pretty damn accurate.

Mason has it right when he places the search for freedom and against the authoritarianism of a Mubarak or of neoliberalism in the context of Marx’s discussion of the alienation of the human spirit under capitalism. However, by not taking a similar look at the analysis Marxist economics provides regarding the trajectory of capitalism, the analysis he provides falls short. It would be useful for Mason and the protesters he writes about if they knew that a Marxist anti-imperialist analysis does not mean that a Leninist solution is the necessary result.

Yet, Mason is not much different from the movements he describes. Rightly opposed to the excesses of neoliberal capitalism (which is merely another phase of monopoly capitalism as described by Luxembourg, et al.), the current movement runs the risk of merely removing the worst of those excesses.

If this is the result, it will only be a few decades before an even harsher manifestation of capitalist greed subordinates the world. Unless, that is, the current movement undertakes a truly radical analysis that places the existence of capitalism itself at the core of the problem.

I don’t expect that capitalism will be removed from the planet. However, without an understanding that it is capitalism that is the root of the problems of inequality and sustainability we are currently facing, there can be no substantive change in the future we face. Then again, the very fact that many elements of the movement don’t seem too concerned about the Left’s role is a call to those on the Left to get active and make it clear that what passes for the Left in today’s world is for the most part nothing of the sort. Indeed, it is a rejection of the Left’s important and earth-changing history.

Despite the aforementioned shortcomings, these two publications are worthwhile and provocative reads. The authors and editors present the primary actors in the global uprising — students, workers, and the marginalized — and describe their passion, joy, and fears. They also begin to explain where the global movement against neoliberalism came from and where it is now. Reading them in this context will certainly help guide us through that movement’s next metamorphosis.