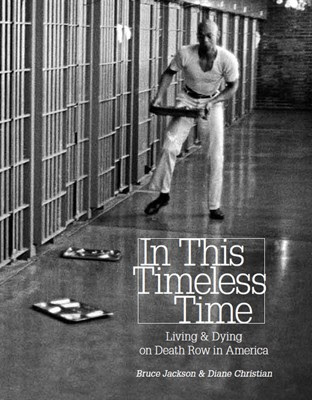 The life and surroundings can be summed up in the words of prisoner Excell White: ‘The gloom,’ he tells the writers, ‘wasn’t anything but emptiness.’

[In This Timeless Time: Living and Dying on Death Row in America by Bruce Jackson and Diane Christian (2012: University of North Carolina Press); Hardcover; 256 pp.; $35.]

The death penalty is a fact of life in the United States. Despite the actions of many well-intentioned people, these premeditated murders continue to take place at a shameful pace. The fact that the death penalty does exist has brought many young people to question the morality of a system that supports and even champions execution.

Unlike the other form of murder carried out by the state — war — the death penalty is harder to rationalize for many people. The act of intentionally putting an innocent human to death; the fact that life imprisonment is a worse punishment to many; the applied racism of the death penalty’s assignments; and the sheer pointlessness of execution by the state has caused many a thoughtful person to come out in opposition.

Those who are condemned to die in the United States wait out their time in parts of certain prisons. Those places are commonly known as death row. Occasionally, these unremembered places are the subject of books and movies. Sometimes, they are also the focus of the infrequent sociological survey.

While the latter surveys do fairly well at creating statistics and prognostications, it is the fictional renderings that do better in evoking the life in these prison tiers of gates and concrete. The despair and dashed hopes; the regret and the lack thereof; even the infrequent joy and laughter.

An exception to the factual/fictional disparity can be found in the recently published book from Bruce Jackson and Diane Christian. Back in 1979 Jackson took his camera into Ellis Prison in Texas and photographed men living on death row there. These photos were an adjunct to a documentary film he and Christian would release in the early 1980s.

The film features interviews, commentary and reflections of the inmates and the filmmakers. The book, titled In This Timeless Time: Living & Dying on Death Row in America, although just published, is also part of that documentary effort. It is a fitting coda.

Designed something akin to a coffee table book, In This Timeless Time is made up of three parts. The first part includes a selection of the aforementioned photographs. The photos are accompanied by text. Some of that text is narrative describing the physical setup of the part of the prison where death row is located. Other bits describe the interior of certain prisoner’s cells and the prisoners. Still other text describes the prisoners’ limited lives while still other text includes the words of the prisoners themselves.

The life and surroundings described can be summed up in the words of prisoner Excell White when he talks about his introduction to the row: “The gloom,” he tells the writers, “wasn’t anything but emptiness.”

The second part of the text is titled “Words.” That is what it is. Words from the prisoners talking about the other prisoners. Words from the writers about the prisoners and their particular cases. Words describing the legal limbo of a death row when nobody is being killed (the book was begun during the period following the Supreme Court’s suspension of the death penalty in its decision on Furman vs. Georgia), and when executions are taking place.

Last but not least are the words the authors use when writing their impressions of individual prisoners or about the Row itself.

The authors’ description of their work on the Row concludes the book. Gaining the trust of the prisoners and fending off the uneasiness of the guards are two of the dilemmas described by the authors. Overcoming their own fears of being alone with potentially psychotic murderers is another. Less wrenching but interesting nonetheless is the authors’ description of how they made the movie: funding, legalities and the like.

The grand finale is the showing of the film to the inmates. Jackson and Christian admit their fears of the prisoners’ reactions. Indeed, this was present in their minds during much of the process.

There is no way that a subject like death row can be presented with beauty. It is one of the ugliest of humanity’s activities. The inmates are not the most beautiful humans and their crimes are ugly. Yet, they too are human. The authors tell of a man on the Row named Arturo Aranda. Aranda who is well-inked. In other words, he has lots of tattoos.

The last tattoo he was getting before he went to prison was of the Lady of Guadalupe. Because he was arrested for murder, the tattoo is without a face. This image serves as a perfect metaphor for the denizens of death row; for the most part they remain faceless. Jackson and Christian’s book gives some of those men a face. Therein lays its beauty.