Both Sides Will Claim They Aren’t Prejudiced

Americans are in utter denial about this topic. But I see it and hear words from white mouthes that instantiate it every single day of the week. And I don’t see this changing here anytime soon. It is too ingrained, and it is handed down from one generation to the next the way a family heirloom might be passed to younger generations. Just another sign of a sick society. 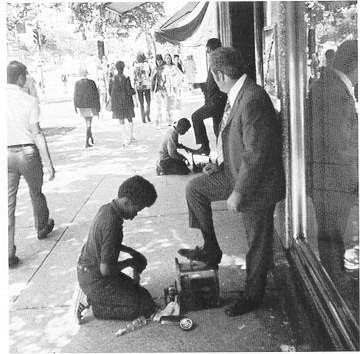 When it comes to race, American politics is as polarized as a red and blue election map. On one side are those who try to distract from the issue; on the other side are those who work to sensationalize it. As this campaign season shows, what unifies both is bigotry.

Take the reaction to my recent In These Times article about Barack Obama winning states with either very small or very large black populations, but losing most states in the middle.

Those results, while troubling, aren’t surprising. In very white states, racial themes are simply not part of the political dialogue, and a black candidate therefore faces fewer inherent disadvantages. In states with large black populations, race is a major political force, but the African-American vote is big enough to offset a racially motivated white vote. It is in the Race Chasm — the states whose populations are more than 6 percent and less than 17 percent black — where race is a political issue but the black vote is too small to counter a racially motivated white vote.

The trend continued in the last few weeks, with Obama losing two states in the Race Chasm (Pennsylvania and Indiana) and winning one outside the Chasm (North Carolina). Nonetheless, the response to this phenomenon by some in the intelligentsia has been willful ignorance.

The Atlantic Monthly’s Reihan Salam said the data are not driven by race, but by Hillary Clinton’s “waitress-mom sensibility sell[ing] well in these regions.” The New America Foundation’s Michael Lind said the evidence does not reflect America’s historic black-white divide, but instead Germanic and Scandinavian migration patterns (I’m not kidding). This is typical behavior from the Establishment’s “serious” thinkers. When confronted with race, they become ostriches and shove their heads in the sand.

The news industry and politicians, on the other hand, are happy to discuss and exploit race, whether by manufacturing controversy (think Jeremiah Wright) or by promoting racists (think MSNBC hiring Pat Buchanan, or Republican senators re-electing Trent Lott to a leadership position). The media and political elites aren’t ostriches — they behave like minstrel show producers, portraying African-Americans as subhuman, alien and unimportant, except for their entertainment value.

MSNBC’s Chris Matthews, for example, differentiated between “regular people” and black people. Pundits refer separately to the “working class” and to African-Americans — as if they are mutually exclusive. Hillary Clinton this week claimed, “Obama’s support among working, hardworking Americans, white Americans, is weakening” — the implication being that non-white Americans are lazy. These terms — “regular,” “working class,” “hardworking” — have become euphemisms for “whites,” who are subsequently billed as the only ones who matter.

Think I’m imagining that last part? Then you weren’t watching ABC’s “Nightline” last week. The Jeremiah Wright brouhaha may be roiling the black community, correspondent David Wright said, “but the real question now is what do white voters think.” That’s right — according to “Nightline,” painful questions in the black community aren’t “real.”

Such denigration happens all the time, and you can tell it is rooted in bigotry because the black vote is — by any mathematical measure — crucial. Political scientist Tom Schaller notes that if Clinton had won slightly more African-American votes, she might be winning. And black turnout for Democrats could decide general elections in many key swing states. Yet, we are still told “the real question” is only what white voters think.

Some will read this and go on pretending the Race Chasm doesn’t exist, while others will keep insisting that the black vote is irrelevant. Both sides will claim they aren’t prejudiced. But racism, whether from ostriches or minstrel show producers, is racism — and it will persist until we recognize it and reject it.

David Sirota is a senior editor at In These Times and a bestselling author whose newest book, “The Uprising,” will be released in June of 2008. He is a fellow at the Campaign for America’s Future and a board member of the Progressive States Network — both nonpartisan organizations. His blog is at www.credoaction.com/sirota.

This entry was posted in RagBlog and tagged Presidential Campaign, Racism. Bookmark the permalink.