Breaking the Beast : The abuse of Circus Animals 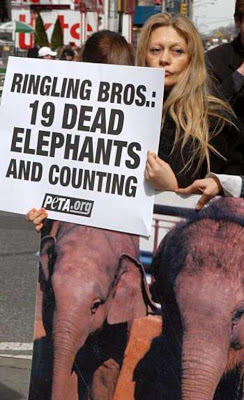 PETA members, like the one pictured here, have led the way in terms of exposing and educating people about circus animal cruelty.
The circus is coming to town…
by Andrea Afra / July 07, 2008

The circus is coming to town.

“Tear that foot off! Sink it in the foot! Tear it off! Make ’em scream!”

“When I say rip his head off, rip his fucking foot off…it’s very important that you do it.”

In 1999, Tim Frisco, a Carson & Barnes circus elephant trainer was caught on video by an undercover PETA (People for the Ethical Treatment of Animals) cameraman during a training demonstration for new employees. As he screams, curses, and stabs at the elephant students he is ‘training’ with bullhooks and electrically charged prods, his goal is to evoke cries of pain and fear from the giant beasts.

“When you hear that screaming, then you know you got their attention.”

Frisco learned his techniques from his father, Joe Frisco Sr., a former trainer for the Ringling Brothers and Barnum and Bailey Circus. Owned by Feld Entertainment, Inc., the same company that puts on other family shows like Disney on Ice, the Ringling Bros. Red Tour is coming to Houston’s Reliant Stadium in July and they’ll do anything to hide what takes place behind the scenes…

“Right here in the barn, you can’t do it on the road…I’m not gonna touch her in front of a thousand people…she’s gonna fucking do what I want and that’s just fucking the way it is…I am the boss, I will kick your fucking ass…I’ll kick the shit out of you, you little prick.”

Ringling Bros. is caught on video as elephants are being paraded through a neighborhood. An elephant named Tonka is being made to hold onto another elephant’s tail but she lets go and the person guiding her has a bullhook behind her left ear. He yanks on it eliciting several of the most horrific panting cries, like someone trying to breath heavily through a trumpet. A close up shot of the back of her ear shows a bleeding wound where the hook has ripped into her flesh. Austin police illegally confiscated the tape from PETA.

Animal rights groups such as PETA have been documenting circus animal abuse for over two decades. As a result the Ringling Bros. FAQ link on their website leads to a seven page, poorly written rebuttal, every single entry a defensive response against accusations made against the circus. For example, they claim their animals get ample exercise and care and have a better, longer life than those in the wild. This could be true if in the wild they enjoyed activites such as riding in cramped box cars for up to seventy hours without a break, fifty weeks a year, being chained with shackles long enough to leave deep gashes on their ankles, and learning stupid pet tricks under the force and threat of violence.

In retaliation for whistleblowers like PETA and other animal rights groups such as PAWS and The Elephant Alliance, Feld Entertainment, Inc., hired none other than former CIA Covert Operations Director Claire George to oversee an undercover operation to infiltrate those organizations that were most deemed to be a threat to ticket sales. Worse than Ringling’s spy games are its treatment of animals. In 1998 USDA formally charged Ringling in the death of Kenny, a baby elephant who was forced to perform while ill. They settled out of court for $20,000. In 1999, the USDA cited Ringling for the injuries of two baby elephants that had suffered severe rope burns during the separation from their mothers. After consulting with experts and in opposition to Ringling’s denial that the separation process was ethical, the USDA stated “there is sufficient evidence that the handling of these animals caused unnecessary trauma, behavioral stress, physical harm, and discomfort to these two elephants.”

This incident took at the Ringling Bros. and Barnum and Bailey Center for Elephant Conservation in central Florida, which is nothing more than a pachyoderm farm for future circus animal acts. Video footage revealed the birthing process that takes place there. Shirley, the seven year old under-age mother elephant, stands shackled to a fence as her newborn baby slips from her body and falls to the concrete floor. She is frightened and as the keepers try to pull the baby away she accidentally kicks it. She is then yanked away as she tries to reach out with a searching trunk to feel and smell her baby, which they named Riccardo. He was euthanized 8 months later when he fell off a circus pedestal during a training exercise and fractured both of his hind legs. Many ex-employees of Ringling have spoken out as witnesses to the daily violence that takes place out of the ring.

Several companies and cities and countries have gotten wise to the mistreatment of circus animals and have stopped collaborating with Ringling. Yet in 2000, when Seattle tried to pass a bill against allowing circus animal acts, Feld Entertainment, Inc. threatened to pull all of their productions from the city forever. The Seattle City Council thought life without Disney on Ice would be unbearable so they nixed the bill that would have set an honorable example for the rest of us.

There are many ways that people can take action against acts that use animals. You can boycott and picket such circuses and attend shows that use live people instead. Cirque du Soleil is much more impressive than any live animal act. Also, if you find a business that offer free tickets don’t be afraid to tell them to do a little research before continuing to associate with the circus. For the true guerilla, if you see free tickets left out on a display, pocket them all and throw them away. Yet the most effective way to help these animals is to tell their story to a kid. Circuses like Ringling Bros. cling to the hope that there will be several more generations that are brainwashed by tradition and lies, the old notion that since we went to the circus we should take our kids too. If kids knew how the animals are treated, they will tell their friends and so on and attendance numbers would drop significantly. Children shouldn’t be made spectators of these broken wild animals and if given the choice and told the truth, their generation will be the death of this tradition.

Ankus/Bullhook: A device used to inflict painful reinforcement on circus elephants. A long metal prod with an inconspicuously sharp steel hook and tip, nearly identical to a fireplace poker. Some of these are equipped with electric prongs.

Free Tickets: Sneak attack! If you see a stack of tickets being given away, take them all and then throw them away (recycle, of course).

Sacha Houcke: Ringling’s ringmaster was charged after witnesses saw Houcke choke his daughter, push her to the ground and punch her in the face in a park in Pennsylvania.

This entry was posted in RagBlog and tagged Animal Abuse, PETA, Texas, The Circus. Bookmark the permalink.

3 Responses to Breaking the Beast : The abuse of Circus Animals