Many in the Iraqi port city say social freedoms are eroding as radical militias gain power.

Basra, Iraq – The billboard in Umm al-Broom Square was meant to advertise a cellphone service. Instead, it has become a message to those who dare to resist the rising tide of fundamentalist Islam in Iraq’s second largest city. 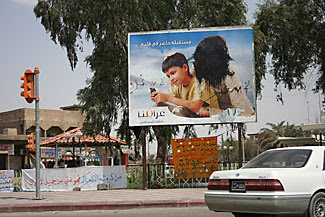 The female model’s face is now covered with black paint. Graffiti scrawled below reads, “No! No to unveiled women.”

That message joins the chorus of ultraconservative voices and radical militias that are transforming this once liberal port city that boasted some of Iraq’s most lively nightclubs into a bastion for hard-line Shiite Islamists since the fall of Saddam Hussein.

Now, as the British prepare to exit Basra Province altogether after pulling out from this provincial capital last week, they leave behind what has been described by many here as an emerging “Shiite Taliban state,” a reference to Sunni extremists in Afghanistan.

And with the British gone, many say, they leave open the possibility that Iran could extend its influence within the mosques, religious schools, and militant party headquarters. Over the past four years, Basra has undergone its own Islamic revolution of sorts.

Posters of the leader of Iran’s 1979 social and religious revolt, Ayatollah Khomeini, who at the time imposed similar limits on his society, are plastered everywhere in Basra.

“There is pressure from parties backed by Iran to sideline liberal, secular, and leftist forces,” says a labor union leader and a former communist, who, like most people interviewed for this story, did not want to be named for fear of retaliation. “Personal freedoms are being squashed … the fabric of Iraqi society has been ruined.”

Public parties are banned. Selling musical CDs is forbidden in shops. Those who sell or consume alcohol face recrimination, even death. Artists and performers are severely restricted and even labeled as heretics. A famous city landmark, a replica of the Lion of Babylon statue that stood here for decades was blown up by militants in July. It was considered idolatrous, according to the strict interpretation of Islam.

Signs ordering women to cover up appear throughout the city. One woman, an Iraqi female activist from Basra, says the notices even threaten death. One banner, she says, said unveiled women could be murdered and no one could remove their bodies from the street.

Although Basra is mostly Shiite, it has long prided itself on being home to a vibrant mix of Sunnis, Christians of all sects, and ancient communities like the Sabean Mandaeans.

But after Mr. Hussein’s regime fell, the sway of radical Islamic militias, such as Moqtada al-Sadr’s Mahdi Army, began growing in the city, as happened in the rest of the country.

“Ultimately, what we will see in Iraq is a conservative society, whether in the Shiite or Sunni areas. Sunnis, too, are going through a very difficult process that will result in the rise of conservatism and fundamentalism,” says Ahmed Moussalli, a lecturer and expert on Islamic movements at the American University in Beirut. From the perspective of many, he says, “Iraq and other places [in the Arab world] are under attack … by the West and there is a lot of return to religion in order to empower themselves to fight the ‘infidels.’ “

This perceived onslaught on Islamic lands and values by the West, which is for many reminiscent of the Crusades more than 1,000 years ago, combined with the Islamic Revolution in Iran has turned the typically quietist and introverted Shiite religious tradition heads over heels, explains Mr. Moussalli.