Bringing Democracy to the Middle East 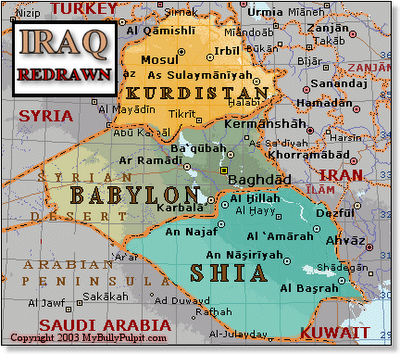 Several years before the 2003 U.S. invasion, western media had already divided the Iraqi society into several ethnic and sectarian groups. Even western powers, particularly the U.S. and the U.K. had their prior invasion policies based on the fact that Iraq was divisible into at least three separate ethnic, sectarian and geographical regions.

The two powers even resorted to military means to translate their strategy of partitioning the country on the ground. They create two no-fly zones one in the north and one in the south ostensibly to protect the northern Sunni Kurds and the southern Arab Shiites from the ‘oppressive’ Arab Sunni regime in the center.

When the two powers occupied Iraq, they pressed ahead with their strategy. Instead of working for a unified and multicolored Iraq, they began driving one wedge after another between the different components of the society.