Bringing the War Home in Alabama 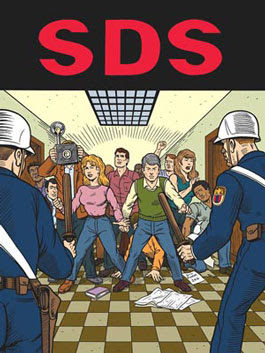 Tuscaloosa, AL – Four protesters from Students for a Democratic Society (SDS) and Iraq Veterans Against the War (IVAW) were arrested here, Feb. 29, at the University of Alabama for performing a mock raid meant to demonstrate the effects of the U.S. occupation on Iraqi civilians.

No one was harmed during the protest that lasted only a couple minutes, and employees were notified of the performance 30 minutes beforehand. After protesters dressed as Iraqi civilians were ‘arrested’ by protesters in military costume and hauled away, Jason Hurd, president of the Asheville, North Carolina chapter of IVAW – who was invited by the Tuscaloosa SDS chapter to speak on his experiences in Iraq, gave an impromptu speech, explaining that the purpose of the action was to demonstrate what life in Iraq is like under the occupation.

Hurd also invited stunned and curious onlookers to his talk scheduled for that evening.However, the talk had to be cancelled, because as four of the protesters – Hurd, Alyse Deller and Christine Jackson from Tuscaloosa SDS, and Jeremy Miller of UNC-Asheville SDS – were approached by campus police, then taken into a building on campus, where they were detained for over four hours before finally being charged with disorderly conduct. The were then hauled away in handcuffs to the Tuscaloosa City Jail. Bail was set for a total of $2,500. Hurd and Miller were also charged with trespassing and banned from campus property.

During the four-hour interrogation, police insinuated that the protesters were terrorists, and threatened to hand over their case to the F.B.I. The University had said that it plans to investigate SDS-Tuscaloosa, which was hosting the Iraq Veteran. The Dean of Students sent out a campus-wide e-mail statement following the incident, saying the University “cannot condone and will not tolerate behavior that mimics a true emergency on our campus.”The incident has sparked intense debate at the University of Alabama and in the Tuscaloosa community.

Local activists from the Tuscaloosa Peace Project were outraged upon hearing of the arrests and immediately lent their support by offering bail money and facilitating contact with the Alabama chapter of the American Civil Liberties Union, which is interested in the case and showing support for the protesters. The organization also criticized the university’s actions as not only unwarranted, but also as repressive and in violation of students’ rights.

In addition, IVAW is considering publicly condemning the university’s actions. “The circumstances surrounding the protest made it evident that this was street theater, but with our society having been carefully crafted into a people on edge, individuals have become rife with hair trigger fear of ‘the other,’ especially upon seeing actors in Islamic-style clothing,” said Diane MacAteer of the Tuscaloosa Islamic Society. “We believe that more than anything else, this was an ill-intentioned use of the recent campus violence in other states as an excuse to quash anti-war protests, especially those that depict the victimization of Muslim families in war zones and allow students to identify with the Iraqi people and reduce support for the war.”

While many have criticized the protest, claiming it was ‘too alarming,’ others are appalled that students can be arrested for expressing their opposition to an unjust and illegal war, and feel as though the students’ rights have been violated. “If you are one of those people who was frightened, you had a glimpse of what it feels like to be an Iraqi man, woman or child who experience things like this and worse everyday,” said J VanBolt, a University of Alabama student who witnessed the mock raid. “I think the one thing everyone – whether you agree with what SDS did or not – can take from this is that people don’t like to be scared and have their lives interrupted! Try and imagine what it would be like if things like this happened to you everyday, and instead of just watching you were actually involved. That is life for people in Iraq.

“The outpouring of support that we have received has been so amazing and empowering,” said Jenae Stainer, a member of SDS-Tuscaloosa. “We appreciate it all, and hope that people will continue to stand with us as we fight to protect our freedom of speech.”