Bud Shrake, 77 : This Texas Tall Tale is a Literary Legend 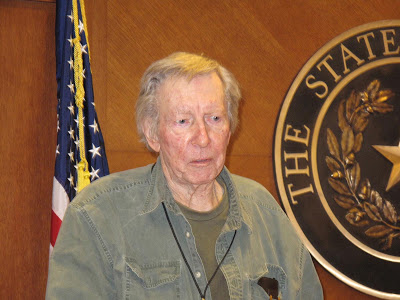 A towering figure in Texas literature — due equally to his lanky frame and his deft literary touch — Bud Shrake was best known in broader circles as co-author of Harvey Penick’s Little Red Book, the best-selling sports tome of all time, and as the long-time paramour of the equally legendary Ann Richards, the late great governor of Texas.

Shrake, who spent his early days as a sportswriter in Fort Worth and later as an editor at Sports Illustrated, penned 11 highly-acclaimed novels and several screenplays, and, along with “maddog” cohorts Dan Jenkins, Gary Cartwright, Larry L. King and Billy Lee Brammer, forever transformed the Texas literary landscape. He was also a biographer and confederate of Willie Nelson.

A bon vivant and widely alleged ne’er-do-well, a legendary good guy and a mainstay of the famed Austin hipster underground, Bud Shrake will be greatly missed.

The Rag Blog’s Bob Simmons was a friend and a colleague.

‘He was an example to me that one could be from Texas and be literate, a man of words and letters, and still be a man, not a dried fusty academic or withdrawn Mr. Peepers too introverted to have a rip-snorting good time.’

What I remember most about Bud Shrake was the easy grace of the man.

I met Bud 1n 1964 when I was a callow college student and was lucky enough to hang out with some attractive and racy women who were fellow students at the University of Texas. (Oh, out there on West Enfield somewhere.) Bud, being a young journalist who had recently separated from his wife in Dallas, had come to visit Austin (was he living in Dallas or and only visiting Austin on a regular basis? The small point eludes me.) But I do recall how at ease and confident he seemed to be, even in the company of those poised young women who always made me feel so self-consciously inept.

Maybe it came from his being so tall. I always thought that the advantage of not having to look up at anyone might give one a head start in the arena of social competition. If so, Bud was the living proof of that theory. He was also an example to me that one could be from Texas and be literate, a man of words and letters, and still be a man, not a dried fusty academic or withdrawn Mr. Peepers too introverted to have a rip-snorting good time. Bud told great stories. He laughed and smiled frequently. He was democratic in that he didn’t care if you were somebody important, as long as you had something to say that interested him. And he was interested in lots of things. Bud may have been a big guy, but was big in more important ways than just size.

I hadn’t lived in Dallas during his sports column days, so I didn’t know what to expect from knowing him. At first I thought he was going to be a jock wannabe who ran around sniffing lockers looking for a little scandal or hero worship fodder. Hardly. Bud was a real writer, and “sports” was just something that he discovered people would pay him a decent salary to cover. He would have made a great political writer, but I suspect the topic bored him. So, from his days at Paschal High School in Ft.Worth on, Bud took on the job of the human spectacle and tried to make some sense of it, recording and explaining ourselves to our selves. It was his portraits of people that you remember from his work.

Bud loved Austin. I think to him it was the perfect mix of weirdness, sophistication, and connection to a past that was still with us. He never seemed to want to “live” anywhere else, though there was plenty of visiting going on. In his earlier years Bud had traveled often and far, but he couldn’t seem to shake that Texas thing, and somehow he decided, or fate decided, that he was going to be a voice that could and would “explain” Texas to the rest of the world. Why not him? Nobody else knew it as well as he did from top to bottom, from inside and out.

Who else had ridden shotgun with H. L. Hunt, or had driven under the triple underpass in Dallas with Bunker Hunt and asked “OK Bunker. Out with it. What happened here?” And to have Bunker throw his hands up off the steering wheel and say. “No,way!” Who else knew the Murchisons, partied with Darrell Royal, played golf with Willie and dated the Governor of the State? There were deeper scholars of Texas history like Robert Caro, J. Frank Dobie, or T.R. Fehrenbach, but no one actually lived inside of so much current Texas history as Edwin Shrake, the man who had gone out with girls from Jack Ruby’s Carousel Club, and had rubbed shoulders with every major Texas athlete and writer from the thirty year span of 1960 to 1990.

Bud seemed to look at everything with a neutral but appraising eye. He was not a man of obvious opinions. Back then I didn’t know his politics, though from the friends he chose and who chose him, one would suspect that he would not have felt comfortable at Republican fundraisers or with Dick Nixon apologists. Bud made his prejudices known by how he painted the people he saw and knew. Reading Blessed McGill or But Not For Love would tell you a lot about how he felt about the world.

When he first came to Austin to socialize he ran with the Scholz Garten crowd, radical journalists, academics, satirists, and literati who liked the wilder side of life and the chemicals that went with them. Bud was no druggie, but he seemed to like the people that had that inclination. (Perhaps they provide better literary material?) He was more a cigarettes and alcohol kind of guy, probably part of what led to his early demise. (Is 77 early?) It’s hard not to hate tobacco when you see all the best being taken down by it. But Bud mixed easily with all those folks. They were proud to have him around. Who wouldn’t have been? We young would-be bohemians felt just like Wallis Simpson when he came to one of our parties. “He picked us! He came to our party.” Who was Wallis Simpson? Oh go look it up.

Bud also had an eye for beautiful women. And they an eye for him. In perhaps 1966 I saw him in New York at our old friend Bill Beckman’s house down in the Lower East Side. He had only recently married a gorgeous woman with the improbable name of Doatsy, a name you could play with if you dared. I think they came down to Bill’s house to soak up some bohemiana. Beckman had a string of semi-famous people strolling though his apartment in those days. Larry L. King, Ed Sanders, Allan Ginsburg, and all kinds of beatnik poets and artists. It was a fun hovel to visit. To say that Bud mixed well uptown and downtown would be an understatement.

It was there that I heard the story of Bud being high on LSD walking around New York one night and being stuck up at gunpoint by two robbers. One of the gunmen demanded of Bud, “Give me all your money.” Bud said that the demand had seemed really comprehensive, and since the guy was so insistent, and he was in a highly sensitive state, he was cooperative. “All my money? All my money? Well, I can’t give you all my money right now. Some of it is at home. Some of it is in the bank. We can go to my house and I have several hundred dollars there, and I can get my checkbook and write you a check for the rest.” He looked at the robbers very earnestly with a wild-eyed acid stare. The gunman reportedly said, “This guy ain’t right.” And they promptly left him standing there with his billfold and the cash he had still on him. Could it be? With Bud, you never knew. And never mind the time he invited the street bum up to the fancy East Side party with him. Easy grace.

His books were great, His magazine pieces and reporting were the best writing one could hope for in a journalism context, and his personal style under pressure was wonderful to behold. I saw him as a walking admonition. I had a long way to go just to deserve to be in the same room. I remember once when he was under deadline for a Sports Illustrated story that he proved you could write a story that would make an editor smile and actually never even attend the event. “I didn’t need to be there. I knew what happened.”

Now I just wish that he would call in from a place far from his funeral, and that he was not actually going to be present. “I’d prefer to not be there,” he might say.

3 Responses to Bud Shrake, 77 : This Texas Tall Tale is a Literary Legend