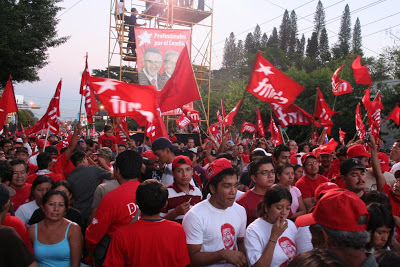 Supporters show their colors during campaign rally before elections in El Salvador. Photo by Alice Embree / The Rag Blog.

The left victory of Mauricio Funes in El Salvador is part of a wave of change transforming Latin America in recent years.

[This is the first in a four-part series on El Salvador by The Rag Blog’s Alice Embree, who was part of an international team observing the March 15, 2009, Salvadoran elections. For a live report, join the author and others at Monkey Wrench Books in Austin on Wednesday, May 13, at 7 p.m.]

I arrived in El Salvador on March 7, the day of the final FMLN campaign mobilization before the election a week later. As we made our way down to the rally, we were soon immersed in a sea of red shirts, hats and banners spread across the broad avenue for a stretch of ten blocks.

The campaign slogan posted on billboards assured “Un Cambio Seguro.” The slogan conveyed the sense of both a sure and safe change. The FMLN slate had wide cross-generational appeal. ARENA had proven over its two decades in power to be the party dedicated to the consolidation of wealth, with no solutions for the vast majority. Still, experience with previous election fraud was cause for vigilance. Ultimately, it was the vigilance and the breadth and depth of mass organizing that translated those red banners into a victory on March 15, 2009.

The left victory in El Salvador is part of a wave of change transforming Latin America in recent years. President Mauricio Funes will be sworn in on June 1 with lots of leftist company from Luiz Inacio Lula de Silva in Brazil, Rafael Correa in Ecuador, Evo Morales in Bolivia, Daniel Ortega in Nicaragua and, of course, Hugo Chavez in Venezuela. Many of these presidents have won by healthy margins for second terms. And Cristina Fernandez de Kirchner of Argentina, Michele Bachelet in Chile and others, while more centrist, also represent historic change in South America.

El Salvador is a small country of about seven million, bordered by Guatemala and Honduras and the Pacific Ocean to the south. It inspired the slogan, “El Salvador is Spanish for Vietnam” in the 80s as the U.S. poured in billions of dollars of aid and training to put down an armed insurgency. El Salvador was a Reagan experiment in “low-intensity conflict,” a rehearsal for neo-cons. But, the low intensity referred to U.S. boots on the ground. Low intensity meant no U.S. draft and an emphasis on outsourcing the conflict through counter-insurgency training and the supply of arms.

For anyone mobilizing against the extreme right-wing government in El Salvador, the intensity was anything but low as peasants were massacred with U.S. munitions and aircraft. A memorial wall has an entire panel devoted to the sites of massacres and many more panels bear the names of 30 thousand dead and disappeared. Those names represent something less than half of those that died in the conflict.

This March presidential election, after other parties dropped out, now offered two radically different choices. On the left, there was the FMLN. The party’s full name is Frente Faribundo Marti para la Liberacion Nacional, created as a united front in 1980 and named after Faribundo Marti, a leader of an indigenous peasant uprising in 1932. On the right, was ARENA, Alianza Republicana Nacionalista, or nationalist Republican Alliance, founded by the architect of Archbishop Romero’s 1980 assassination. [See Alice Embree’s Rag Blog article, Remembering Archbishop Oscar Arnulfo Romero.]ARENA had held the presidency since 1989, deferring to the Bush free trade agenda and promoting an agenda of corporate globalization and privatization of public services.

The choices were clear-cut. ARENA brought supporters in rented buses to a soccer stadium event. The FMLN supporters came in the back of pick-up trucks with red banners to a street rally. ARENA intended to continue a path paved by the Central American Free Trade Agreement into corporate globalization. It didn’t take a political science degree to see which party represented working class aspirations.

This entry was posted in Rag Bloggers and tagged Alice Embree, El Salvador, Latin America, The Left. Bookmark the permalink.