Burning Man: Puts Other Festivals in the Shade 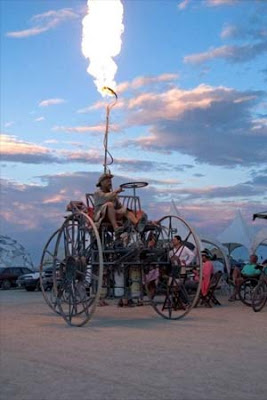 Each year is based around a different theme, last year was The Green Man. Photo by Piers Moore Ede.
America’s premier counter-culture event is far more than just a naked camping fest
By Piers Moore Ede / August 20, 2008

In late 1986, a beach party celebrating the summer solstice marked the first official Burning Man. Within a few years, its participants had become so many, and its activities so outlandish, that founder Larry Harvey and his friends decided to move the festival to somewhere more appropriate. They chose the Black Rock desert, a 100-mile prehistoric lakebed in north-western Nevada, where temperatures regularly reach 110°F.

By 1997, Burning Man was already well on the way to becoming a cultural phenomenon. That year 10,000 people turned up to experience a week of desert living, far outside the mainstream culture of the United States. Within “Black Rock City”, participants abide by a gift economy, in which commerce of any type is expressly forbidden. “Burners” must bring all their own food, camping equipment and water; and are expected to “participate” in one form or another. Many choose to construct extraordinary temporal pieces of art: full size buildings made of driftwood and junk, flashing sculptures belching flames into the night. Walking around the desert after dark, this formerly empty expanse shimmers with a thousand projections and creations, impromptu performances, DJ booths, fantastical art cars resembling pirate ships and dragonflies. “It’s like stepping through the looking glass,” one Burner told me. “The default world – which is what we call the world outside – just can’t compare with this.”

In 2007, numbers at Burning Man reached 35,000. There were people of every age group, from every stratum of society. I was among them, knowing no one, expecting little more than a fun week in a somewhat surreal environment. And yet, like thousands before me, the week was transformative, life changing, instantly addictive. This third largest city in Nevada (vanishing “without a trace” after the festival’) was spotlessly clean, full of highly creative and considerate individuals. People travelled everywhere by bicycle, some of them naked. Everywhere I went, people offered me food, free rides on their “mutant vehicles”, invitations to all-night parties, yoga lessons, fire juggling demonstrations. Dressed in bizarre costumes, wearing sand goggles and dust masks, it seemed easy to take people at face value, little caring what they did outside Black Rock. The annual theme, which last year was entitled Green Man, seemed to perfectly mesh with the zeitgeist. Invention and great creativity was needed to rethink the carbon-based structure of our world. At Burning Man that world seemed to rise up in the present moment, ecologically sound and full of laughter.

It would be all to easy to write off Burning Man as a desert rave, an escape valve for overstressed executives, a 21st-century update on Woodstock. But more than any of those things, Burning Man is a philosophy, an attempt to reinvent the parameters and constraints of society. Within the most advanced capitalist economy in the world, participants choose to free themselves from commerce. Art works are anonymous, often destroyed at the end of the week, even in the case of colossal structures taking months to build. People make an effort to help each other – a necessary step, actually, given the potentially hostile natural environment. Unlike any other festival I’ve visited, it’s one without celebrity, corporate logos, or personal egos of any kind.

“Given the current cultural and political climate in the United States,” Geoffrey told me, a veteran Burner of seven years, “this is really the only sane place left. I’ve been incredibly broke this year and wasn’t sure I was going to make it, but then I realised that I had to be here, it’s the only truly sacred experience open to me right now.”

Perhaps more even than the enlightening effects of doing without money, running water or cell phone connection, Burning Man seems to effect a spiritual magnetism on those who attend. From above, the circular design of the city, carefully zoned each year, seems akin to some ancient pagan site. With its fire worship, close connection to nature, and emphasis on participation, Burning Man offers a transcendent experience to all comers. Each year, a Temple of Forgiveness invites people to inscribe the names of loved ones who have passed away on its walls and ceilings, before the whole structure goes up in flames, in a grand gesture of emancipation. A central tent hosts Wiccan dances, group zazen, chanting and tribal drum circles, invoking a spiritual dimension without dogma or belief.

For myself, as I rode my bicycle far out on to the prehistoric lakebed at midnight, looking backwards on the glittering utopia that is Black Rock City, Burning Man seemed like the freest place on earth. Behind me, people from all over the world were gathered in what felt like some kind of non denominational worship. I wasn’t exactly sure what we were worshipping, but it felt significant. Significant enough that back in the ‘default’ world, my first act was to book my ticket for 2008.

* The Burning Man Project: August 25-September 1 2008-08 (tickets must be bought beforehand, they’re not sold on the gate), burningman.com

* Getting there: British Airways flies to Reno via Dallas or Chicago (with onward flights on American Airlines) from £549.20. Black Rock is more than 100 miles north of Reno, and gives a new meaning to the term “middle of nowhere”. It takes roughly three hours by car, and you should be prepared to share the road with livestock and wildlife.