But Will It Happen Again in 40 Days? 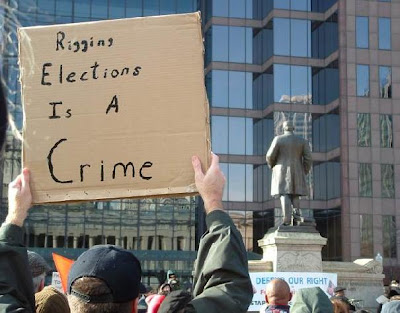 There have been some interesting and potentially shocking developments in the King Lincoln Bronzeville v. Blackwell lawsuit currently pending in Ohio. Some of these developments we can report to you, some are still off-the-record. Events are happening by the day and almost by the hour, so check back frequently for further information and updates.

We’ve previously covered the King-Lincoln v. Blackwell suit in some detail here, but in brief, some Ohio voters filed a lawsuit about the 2004 election. They want to take the deposition of Mike Connell, a Republican IT “guru” who set up the computers for counting the votes in Ohio.

There has been a stay on the case for some time, and the lead attorney for the plaintiffs, Cliff Arnebeck, has filed a motion requesting a lifting of the stay so that he can depose Mike Connell under oath and ask him about his 20 years of work for the Bush family and for many, many Republican politicians and causes, and specifically his computer/IT work for Ken Blackwell in Ohio 2004.

In his motion to lift the stay, Arnebeck writes [PDF, 6 pages], “The public has a need and right to know, before the next presidential election, that the top Republican IT expert shares a concern about the vulnerability of electronic voting systems to fraudulent manipulation, and that this is not just ‘conspiracy theory.'”

Arnebeck’s reference to Connell sharing “a concern” about electronic voting is based on cyber security expert Stephen Spoonamore’s conversations with Connell. Mr. Spoonamore is serving as an expert witness for the plaintiffs in this case. (In August of this year, we covered a recently-released 2006 interview with Mr. Spoonamore in which he discusses his views on electronic voting and the impossibility of securing an election run on these machines.)

In a supporting affidavit from Mr. Spoonamore (filed along with the motion for relief from stay), Spoonamore writes that Connell “clearly agrees that the electronic voting systems in the US are not secure.” He continues, “Mr. Connell is a devout Catholic. He has admitted to me that in his zeal to ‘save the unborn’ he may have helped others who have compromised elections. He was clearly uncomfortable when I asked directly about Ohio 2004.” [emphasis added]

In addition to Spoonamore’s affidavit, Arnebeck has filed with the court an affidavit from Dr. Richard Hayes Phillips, author of the book Witness to a Crime: A Citizens’ Audit of an American Election. Dr. Phillips writes: “Having personally examined 126,000 ballots, 127 poll books, and 141 voter signature books from 18 counties in Ohio, and having examined many other election records as well, it is my conclusion that there is so much evidence of ballot alteration, ballot substitution, ballot box stuffing, ballot destruction, vote switching, tabulator rigging, and old-fashioned voter suppression, that the results of the 2004 presidential election, in all likelihood, have been reversed.”

Dr. Phillips’ affidavit is a must-read [PDF, 6 pages]. He names names and lists a litany of crimes from the 2004 election that strike at the heart of our nation; crimes that have weakened and damn near destroyed our democratic republic.

If these crimes are allowed to be repeated this November — and we have every reason to believe they *will* be repeated — we truly believe that “the Great Experiment” that is America will be at an end.

This is a nation that prides itself on the rule of law. One of the reasons for punishment of criminals is its deterrent effect not only upon those convicted of the crimes, but also upon those who might contemplate committing similar crimes in the future. Even if the persons who engaged in criminal activity related to the election of November 2, 2004 are no longer in a position to do so, it is vital that their crimes be investigated and that their guilt or innocence be established. Election fraud undermines the very foundation of the United States of America.

Any time I am asked when would be a good time to hold accountable those who were responsible for rigging a presidential election I will give the same answer: Now is the time. And for every day we have failed to do so: That was the time.

As we wrote above, this situation is still developing and there are some very volatile events taking place around this case. Stay tuned to this page, as well as to Velvet Revolution and our colleagues at The BRAD BLOG, for details and information as they happen.