Carl Davidson : Networking at the DNC 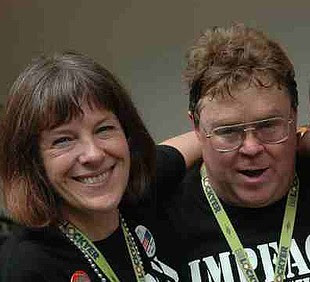 Mimi Kennedy and Tim Carpenter of Progressive Democrats of America (PDA).
‘At the DNC, all the important stuff these days goes on everywhere EXCEPT on the convention floor’
By Carl Davidson / August 30, 2008

DENVER — This is my last day in town, and all the talk around the breakfast table is how and where everyone will watch or listen to ‘The Speech’, Obama’s premier performance at Invesco Field. I decide not to waste time hassling long lines or working connections for tickets, since I can watch it on TV in nearby Boulder, where my partner is staying with family.

So I head for the church hosting ‘The Nation’ and Progressive Democrats of America (PDA). On arrival, I’ve just missed Rev. Jesse Jackson, but Ron Kovic of ‘Born on the Fourth of July’ fame and early member of Vietnam Vets Against the War is holding forth on his mistreatment at a past GOP convention. He then reports on yesterday’s powerful five-mile IVAW and youth march. He did the entire length in his wheelchair. He can’t praise the organizers highly enough, acknowledges that Obama did the right thing, but says to keep pushing on. He ends by asserting that we can’t let the right have a monopoly on patriotism, so long as we remember we’re also ‘citizens of the world.’ He gets a standing ovation.

I decide to walk the streets again. I want to take it all in, and reflect at little on what major party conventions are all about.

First stop is the lobby at the Sheraton. For a veteran organizer like me, working away 0n a variety on fronts for 45 years, all I have to do is stand there for 15 minutes and someone I know will show up. Sure enough, someone calls my name, and it’s Brian Kettenring from ACORN, now one of their top organizers. I first met him when he was a young student ACORN worker in Chicago. He’s been on the West Coast for years, but introduces me to ACORN activists from Pennsylvania, now my base area.

Brian tells me he’s headed for ACORN headquarters in DC, where, half-joking, half serious, he tells me he wants them to let him set up a ‘Department of Socialism’ to discuss ‘bigger picture things’. I tell him I’ve working on just the thing for him, the newly formed ‘U.S. Solidarity Economy Network,’ with an upcoming conference early in 2009. My trend in SEN is based on David Schweickart’s ‘After Capitalism’ with ‘Economic Democracy’ as a ‘successor system’ enroute to a fuller blown socialism. It’ll challenge ACORN, but it starts on the ground, where they are. He’s very interested, and we decide to stay in touch on it. Plus I now have a new contact in Philly.

So there’s lesson number one. Conventions are about horizontal networking. Completely apart from the official goings-on, this stuff happens everywhere. Multiply my short example with Brian by 100, and you get the idea.

From the Sheraton, I take an elevated walkway and run into a building with an inviting, postmodernist display on ecology, energy and related topics. It’s aimed at DNC delegates and put up by a high-tech design outfit called ‘Partly Sunny: Designs to Change the Forecast. Inside are dozens of displays of green and solar construction materials and firms to build the homes and offices of the future. When a young guide offers to help, I ask ‘are any these outfits worker or community coops?’ Some are, she answers, and shows me how I can find out more. This gets me thinking that almost all of these firms are what we call ‘high road capitalists’ and thus some of them possible candidates to pull into our solidarity economy networking.

Now ‘Partly Sunny’ is just one of thousands of corporate displays, presentations and parties going on all week. While this one is a small, relatively progressive example, all of them, bad guys and good guys, are going all out in the DNC events to draw the country’s political class upward and into its orbit of influence.

Thus we have lesson number two. Conventions are about vertical networking and its more aggressive cousin, cooptation. There’s a constant influx of newer and younger delegates, candidates, elected officials and party workers to be recruited. If you’ve been to college, think fraternity and sorority ‘Rush Week’, and you’ll have the right idea.

I head back to the church because I want to catch PDA’s summary sessions. Along the way, I run into a dozen people I know wanting to know if I know where they can get tickets (I don’t) or telling me about the hoops they went through to get them.

This is lesson three. Conventions are about discovering the pecking orders in the various cliques, and how to turn them to your advantage, for good reasons or otherwise.

So I what do I conclude? Major party conventions are really a lot like high school and the socialization process we all experience in and through them. Learning all the cliques, all the pecking orders, where you can best fit in and suffer least, having a good time in the coolest clubs and extracurricular activities. You know, all the important stuff that goes on everywhere except the classroom. At the DNC, all the important stuff these days goes on everywhere EXCEPT on the convention floor and the ‘big night’ speeches. These latter events are actually, for better or worse, carefully scripted infomercials mostly far beyond our reach.

A corollary lesson: You can accomplish a lot here, but you better come in with a very clear idea of your core values, your own platform and your strategic orientation. If you don’t, you’ll wind up being part of someone else’s platform and strategy. But if you do, you can make major gains.

PDA is a case in point. As I arrive for the final sessions, Dennis Kucinich is pressing impeachment, whipping out his pocket copy of the Constitution. Next, Steve Cobble, Leslie Cagan, Jaime Raskin (State Senator, Maryland) and Rep Keith Ellison, the Congressman from Minnesota who is also a practicing Muslim, and caused a flurry in the press when he was sworn in using Thomas Jefferson’s personal copy of the Koran–all of them are on the platform, ready to follow up and discuss what it means to defend the Constitution and democracy in even broader terms.

Tim Carpenter, PDA’s tireless chief organizer and John Nichols of the Nation are setting up the crowd. Tim is explaining how PDA has grown, in just four years, from a few dozen in 2004 to now over 140,000 members all across the country. Mimi Kennedy and Jodie Evans are also there, and add in on how the persistent and audacious pursuit of their ‘inside-outside’ strategy has succeeded and the turnouts to all the sessions this week shows they’ve made even greater gains.

PDA, of course, is hardly the only player in the progressive movement. I like much of what they do, and work closely with them back in Beaver County, Pa. But there’s also room for improvement and other approaches and organizations, too. My point here is that groups ignoring and avoiding the political events and activities surrounding elections–and you don’t have to support any candidate or platform to be engaged in them–are only shooting themselves in the foot.

I’m hardly a believer that basic social change is achieved by elections. But I’m a firm believer that change on this order must proceed THROUGH them, in the long march through all the institutions of our society, building the strongholds we need for the popular power and economic democracy that can take us even farther down the road. With that thought in mind, I’m headed back to Beaver County, Western PA, where I hear Obama and Biden are making a bus tour around the state. It’s a very tight race there, and we’ll soon see if this helps.

1 Response to Carl Davidson : Networking at the DNC