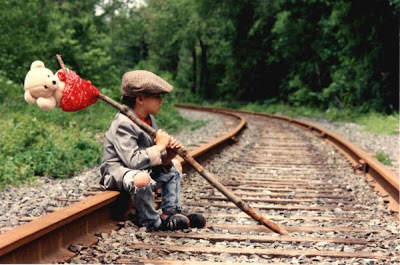 Running away from home. Image from goodbuddies inc.
Grow up, Ron Paul

Like most other little kids, all I wanted to do was eat junk food, play video games, and goof around with my friends. I didn’t like being made to go to school, going to bed at 9 p.m., eating vegetables, doing homework after school, or taking out the garbage. And like most other little kids who don’t like abiding by the rules of their parents, I sometimes fantasized about what it would be like to run away from home.

But when I packed my backpack full of clothes and individually-wrapped packs of peanut butter crackers from the pantry, I could never go through with my plan. I knew if I ran away I’d be hungry, cold, lost, and eventually found by the police and returned home.

Libertarian views of government regulation are very similar to how six-year-olds view the authority exerted by their parents. Ron Paul’s every-individual-for-themselves rhetoric appeals to young, radical libertarians with simplistic views of authority and an ignorance about why government exists in the first place.

Corporate giants would be free to monopolize markets, since Ron Paul opposes federal anti-trust legislation. And employees would no longer be required to pay into Social Security.

So what would this libertarian utopia look like, if Ron Paul were elected and followed through on his campaign promises?

Ron Paul’s right-libertarian ideology does espouse a new kind of freedom, just as rebellious children who fantasize about running away from home dream of a new kind of freedom. But, as much as we may have rebelled against our parents as little kids, we eventually matured and realized that the rules and regulations our parents imposed on us were meant so we’d grow up to be responsible, functioning adults in society.

An unregulated little kid free to eat junk food and play video games all day won’t ever learn the responsibilities of adulthood. And an unregulated society where all individuals are out for themselves will quickly collapse.

[Carl Gibson, 24, of Lexington, Kentucky, is a spokesman and organizer for US Uncut, a nonviolent, creative direct-action movement to stop budget cuts by getting corporations to pay their fair share of taxes. Since its founding in February 2011, over 20,000 US Uncut activists have carried out more than 300 actions in over 100 cities nationwide. You may contact Carl at carl@rsnorg.org . This article was published at and distributed by Reader Supported News.]